It's nearly Christmas, so last week I had my old hat on, that of theatre lighting designer, and it should come as no surprise that the show in question was panto. Flo White and the Seven Dawgs is an urban retelling of Snow White written by my supremely talented brother in law Robin Kingsland and produced by Pineapple Arts, a street dance and musical theatre training company for people from five to, well any age, which is loosely connected to Pineapple Dance studios.

I don't do a lot of Lx design anymore, though it used to be at least half my work, so it's fun to get behind a lighting desk again. As a theatre consultant it's important to get one’s hands dirty from to time in an actual working venue as it reminds me why we bother doing our job. This is because I am blessed by doing shows in some terrible venues; venues where no theatre consultant has ever set foot. Well not every theatre is quite that bad. I've lit a few street dance events in Stratford Circus lately, a decent TPC courtyard theatre from the early noughties, nicely laid out and well equipped, though it could of with a spot of loving more than a decade after opening. Some of them, however, are real doozies which should remain nameless, to protect the innocent.

Last week’s venue will get a name check; the Dugdale Centre near my home in Enfield. The Dugdale is part of Thomas Hardy House which houses Enfield Council’s local studies library and archive, and is named after Florence Dugdale, a native of the borough and second wife of the author. The performance space, I hesitate to call it a theatre, seems to have been an after thought squeezed into the corner of the ground floor. It is a flexible multipurpose space about 15m x 15m with retractable seating units which is, sadly, too low at about 4m to the grid. The space lacks clear theatre design with no sound light lobbies, no get-in apart from double width emergency door and limited dressing room and storage facilities.

But, it can and does work, and what makes it work is something present in every theatre, good or bad; people. Theatre people are an astonishing bunch who, Occam-like, find the simplest solution to any set of problems. This is rarely based on anything other than experience and intuition. These instincts rarely fail theatre folk providing us with inventive answers to problems of staging, auditorium layout, lighting positions, quick change rooms etc. There is nothing unusual about this either, it’s necessary on a show by show basis in the best of theatres and most of have worked in found spaces or site specific shows where the challenges are often greater.

In the Dugdale, noting the room is excessively wide and low, the guys bought additional decks and seats sufficient to create a thrust arrangement by adding three rows of eight seats to each side of the stage. This arrangement is not suited to everything, but it does work rather well and is how we staged Flo White. It certainly increases the audiences involvement with the performance and encourages that sense of shared experience so important in theatre. therein lies a key point; to truly understand and appreciate a theatre space you have to sit in it and see a show, preferably more than once. A theatre space has to be experienced physically and emotionally as well as intellectually.

The challenge for me in the coming years of PhD research is to narrow the gap between these three areas. To learn more about auditorium layout and established geometric systems and be able to examine on paper the relationships within the space, but also to take the emotional and physical experiences and write about them in a meaningful way both qualitatively and quantitatively.

And the show? Well, Flo has triumphed over Belladona Bianco and found true love with Muddles (not the Prince in this one) and the audiences of schools and families have loved it. Well done Pineapple Arts and thanks for allowing me along for the ride! 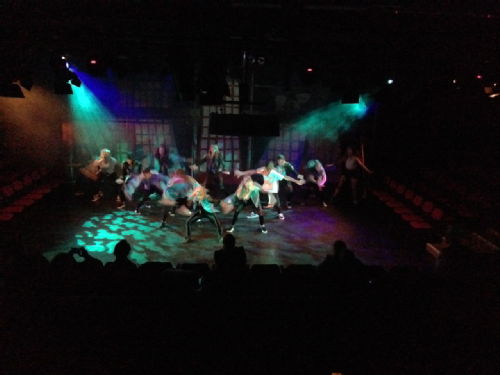