Hanne received a present of a voucher for a hot air balloon ride for two. We tried to use it last year on holiday in the West Country but the weather was not suitable so we transferred to Warwickshire. The weather has to be just right (calm with low wind speed, in the right direction, high enough cloud base) and each time we booked a date we had to phone the night before to see if the forecast was good for the following day. At our third attempt the message was that the flight was on and would start from Stratford-upon-Avon race course on May 6th, 2012. With a light wind from the East this flight would take us towards Worcestershire.

In the morning the temperature was around 5C with high cloud clearing slowly. Assembly time at the race course was 6:30am and we arrived slightly early so the crew were just unpacking the balloon and wicker basket. We were given a safety briefing mostly concerned with the brace position for landing, no smoking, no mobile phones, no loose items. I'd done some browsing on the internet so I was expecting all this and had decided just to take my small pair of binoculars (RSPB Rambler 8x25) and my point and shoot camera (Lumix TZ7), wear a fleece and a down jacket, and hiking boots as the ground at take-off and landing were both wet.

We had a full load of passengers (12) and a pilot in the basket. The latter is divided into 5 compartments, a central one for the pilot and the gas cylinders, and 2 smaller compartments at each end, each holding 3 people snugly. The basket comes up to chest height and has padding and ropes to grip for the landing. There's no possibility of moving round so once in the basket you see whatever is visible from where you are. The pilot can swing the balloon around using vents in the balloon so it is not really limiting.

Although there is no physical steering gear on the balloon, the wind tends to be in different directions at different altitudes so there is some degree of control possible. On the day we flew, ascending took us to the south west and descending to the west. This meant our trajectory on landing would be a curve rather than a straight line. I was impressed by the skills of the pilot.

After stretching out the balloon, attaching it to the basket, and attaching the basket to a Landy, the inflation of the balloon began using two large fans and cold air. Once the balloon had expanded enough that the burner could be turned on without danger to the fabric (a large commercial balloon costs well into 5 figures) then the burner was lit and the inflation went rapidly until the basket was pulled upright. We then divided into our threes and climbed in. More gas and we were quickly airborn and being carried by the wind; the chill factor then disappears as we picked up speed.

We headed away from Stratford and a second balloon which took off at the same time climbed a little higher so was carried away from us due to the different wind direction. We eventually climbed to over 1,000 feet so had a good view over the surrounding countryside without things being too small. Here's Bidford on the river Avon.

and some crops in the fields. I wasn't easy to see what was growing except for the wide expanses of yellow rape flowers.

Most of the time we were airborn we were under cloud but could see the edge of the cloud to the west. Just before we landed we came out from under the edge.

The pilot had identified a campsite as a good landing point, but it was next to a hill and this caused the wind direction to change carrying us over a field of crops so we ascended again until we spotted an empty paddock (with a power line in front of it). So we flew over the cables and then came down in the paddock and made the gentlest landing imaginable despite all being braced for a heavy landing. The basket stayed upright and two passengers got out and took a halyard attached to the top of the balloon out to the far side of the paddock to pull the balloon down as the top was opened to let out the remaining hot air. When the balloon had collapsed it was detached from the basket. The crew who had assembled the balloon had stayed in radio contact and followed us in convoy With the families of the passengers who had come along. They arrived after about 20 minutes and helped us finish packing up the balloon whilst one of them went to look for the owner of the paddock to check it was OK to take a Landy in to pick up the basket and balloon. They were agreeable so everything was packed up and we were driven back to Stratford to our waiting cars. There was a camera rig hanging from the balloon which was used to take a group photo during the flight (and we will get prints in due course), but apart from that most of the pictures whilst in flight are those taken from the balloon so there are no other pictures of us in the balloon or our balloon ride in flight. To fully document a balloon ride, I suppose we should have had someone on the ground to follow us. 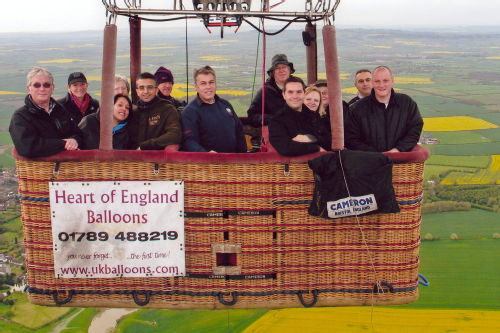 But I would rather be in the balloon.