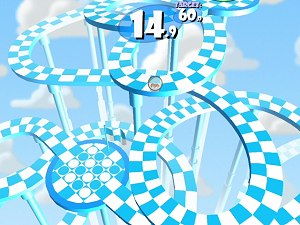 Today's state-of-the-art games are cool. Halo 2? HalfLife 2? GTA San Andreas? They all rock. But there's a problem (apart from the fact that I seem to have started writing like William Goldman): I'm too old for them. I played video games between about 1980 and about 1990, so everything I spent time on was 2D, and an arcade game or a home computer or console arcade clone. By the time FPS's and Final Fantasy and survival horror games and the like came along, I'd pretty much given up. I still like to find a few minutes to play now and again (with a three year old in the house, playing in five minute bursts is about all there's time for) but there's pretty much nothing on the shelves in Game that's aimed at me.

But that's okay, because there are other solutions for retro gamers like me:- 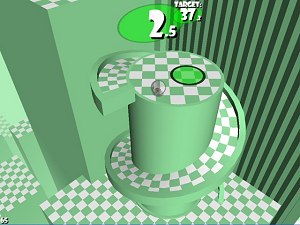 Current favourite: HamsterBall. This is basically the old arcade game Marble Madness given some shiny new graphics, some great multi-player modes, and new tricks and toys on every level. A particularly nice idea is the "Ghost Ball"; if you lose a level, when you replay it, there's a semi-transparent ball as well as your ball, showing you what you did last time. So you can see how you're doing compared with last time, and whether you're improved enough to get to the finish line in time.

Mac Mini. It really is $499, but it's £330 in the UK, plus if you wanted enough memory and disk to be useful, and maybe wireless networking, you'd be up to £450, and you'd still need to supply your own monitor, keyboard and mouse. And you get iLife but not iWork. Nice form factor though, and you can use it with a TV (via an optional connector). First take: good, but not amazing, pricing.