…Despite NO correspondence from me, he misses me! Isn't that nice, and wierd – nothing surprises me with this guy, but at least this email entitled " IM SORRY" made half an ounce of sense!

"I SLEPT YESTERDAY, BEAUCE I WORKED HARD NIGHT ! WITH YOU, CORRESPOND, WIDTHNESS, BIG, PASSION…. IS MAKING HAPPY ME, I MISS YOU! THE WINTER CAME ANY MORE HERE, RAINY, ROMANTIC WEATHER"

Personally I don't find rain romantic, most of the time it just pisses me right off!

At this point I was thinking, maybe he's just a hopless romantic stuck in the body of a blithering idiot, but then he also sent me this today WTF?!!!! Can anyone read Turkish, id be quite interested to know what this means??!!!!

AND THE FUCKER SPELLED MY NAME WRONG AGAIN!!

The Turkish stalker himself!!

Ha ha, shock horror, the stalker has finally stopped emailing pics of me to me and sent me one of him instead!! Dnt know whats scarier, the pics of me or this one of him!! Is it me or has he added the war paint in graphics?!! Maybe the message he sent with the pic will ansewr this: "Hello JODEÝ
I COULD NOT SEE YOU OPEN! YOUR, LIKE, THINK, MUSIC! AND I ( WE APPEAR HARD THE MEN )"

My Brother drunkenly jumped out of his bedroom window!! Students – who'd have 'em!!

Unbelievable – got a phone call last night from my bro's friends saying he had got pissed and for some reason, jumped out of his window!! We phoned the hospital and he was a bit drowsy from the morphine but claims that his mates went out and thought he was out so locked the door from the outside. the only way out was through the window – does anyone else detect a hint of BULLSHIT!!??

He's now stuck in a hospital in Plymouth, perhaps for the duration of xmas with two shattered heels, gonna be in a wheelchair, and (hhe he) the funniest part is that he is in a non smoking hospital, I think that is paining him more than the feet!!

Jesus Christ, I locked all the photos on here that may incite stalkerish behaviour and blocked him from msn, but really, didn't think I would have to lock ones of me and my family on xmas day last yr!!!

So, today he sent me this: He's and artist, but still, a lot of effort to take off one of my pics, draw it himself and email it to me!! Then, when I had'nt replied within 2 hours he sent me three separate emails, 1 said "JODEI LOVE", another said "YOU DEPRIVED" and the other (bless the guy!) "LOOK AT ITSELF GOOD BECAUSE YOU DON'T WRITE ANY MORE ! I LOVED YOU"

Not so worried anymore, whether or not he's got and filled in his visa forms, he doesnt know where I live (Hoping this is true) and doesn't have my bank details – Just thoroughly amused and would like to share the amusement with u guys – ENJOY!! xx

I have never been so shattered in my life, just had the most treacherous and reckless night of my life!! Went out with my friend Mel to Portsmouth, however, on getting there we realised there was a ship in so it was Matlo's 'r' Us, NOT GOOD!!

After having my pic taken with a wierd …(insert ur own interpretation of what exactly this Uni mascot is!) we decided to escape the clasps of the lusty young sailors and head off to a student night in Chichester Now, I have never been out in Chichester before, mainly becuase It is a small town, 30 miles away and pretty inaccessible except by train with a change in between. And so, already being 11pm and having drunk many a vodka we werent in the most sensible moods when we made the decision to go there despite the next train home being at 5.47am!! Nevertheless we got there ok, and for free on the train, got a cab to the club which was about 15 min drive from the station through countryside!!

The club was really fun, loads of students, none of the angst or gold creoles that you get in Portsmouth, so fun fun fun all round!! Also, longer hours was good, at around 2 I switched to drinking water, so did most other ppl there and so I was sober by the time we had to go!

However, the beginning of our troubles came when the club shut at 3, the prob being we had a 3 hour wait for our train, it was 3 degrees and we were both wearing small dresses and i was wearing my mini-mouse shoes!! Decided to walk to the station to keep ourselves warm but didnt know the meaning of the word countryside till we attempted the walk – no pavements either side of the road, winding roads, mud, pitch blackness with only Mel's phone for light and a level crossing thrown in for good measure!!! Finally agreed to give up, so managed to hitch hike back to civilization and luckily the guy who picked us up was a bouncer from the club!! Walked the rest of the hour to the station, still had 2 hours to wait and numb toes!!!

Anyway, being as resourceful as I am, I found a big rag thing in the station that they were using as a dust sheet and me and Mel huddled under it and told stories for most of the 2 hours, trying not to let eachother fall asleep or get hypothermic, anyway, that bit was fun, nothing like bonding with ur girlfiends at 4.30 am and slightly delirious – told stories about warmness – holidays, hot water bottles etc!! At around 5, commuters began turning up and looking at us as if we were with the dodgy tramp who was picking up fag butts in the station!! Anyways, train was on time, all good and apart from being a slow train I was glad to rest my feet and head and be slightly warmer!! Arrived near home at 7.10 and the coffee shop was open – JOY TO THE LORD!! I was so excited I had coffee AND hot chocolate, oh and a pkt of McCoys crisps!! Got a cab home looking like 2 complete dirty stop-outs but by this time I was past caring, got in this morning just in time to see my dad going to work and told a little white lie that I stayed at Mel's!

So, sorry – long blog, long story, loooooong night – But good fun, very good night, would do it again, but with more ppl and get a taxi all the way home from Chichester, but hey, Im alive and well and warm and going to get an early night!!

I know, I know, due to all the comments on yesterday's blog I have started to lock all of my blog entries, also to lock some of my pictures!! Oh dear, I seem to attract wierdo's and esp Turkish ones for some reason?! Anyhow, NOTHING could scare me after this latest guy!!

And so, the end of another long, work filled term, SO ready to go home and 'allow' my mum to look after me. I do miss the times when my dad wakes me up in the morning with a cup of tea, sometimes breakfast, and opens my curtains so I stay awake (I dont often miss this 7am ritual, but right now I even miss my lil bro!!)

Packing is a nightmare, as anyone who knows me will attest, I have more clothes and shoes than fluffy pink brain cells and only one holdall to lug it all home in, its the most ridiculous situation!! I have sunk to borrowing cardboard boxes from friends and using my linen basket to hold clean clothes, the world is going mad!

Doh, off for a nice hot bath now and not thinking about the long drive home tomorrow aft! I will endeavour to continue blogging but for those who wont be, HAPPY BLOODY CRIMBO!!!

I have a Turkish stalker!!!!

Oh my god!!!! A guy emailed me via my blog the other day and added me to his msn. He cam on and we chatted, he told me he was a graphics teacher in Turkey…Not too creepy huh? Well, then he proceeded to ask me if I was married and said a lot of incomprehinsible things. WELL. the next thing I know I recieved an email from him, he had cut a really awful picture of me from my blog, ENLAGED IT, and adorned it with graphics!! Well it doesn't end there either, today on his msn he has this pic of me on HIS space for a pic!!!! 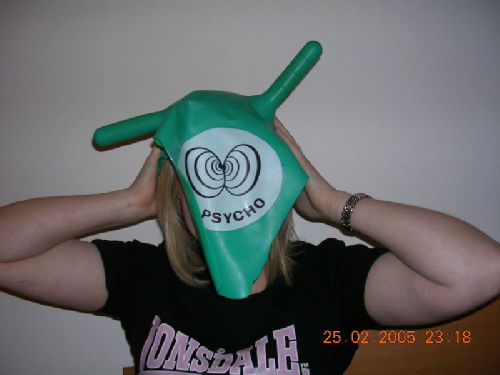 What a wierdo!!!! I am positively scared and awating the next surprise!!!!

Oooooohhhh LORDIE! For the first time in 6 1/2 years I am single, and actually feel as if I am!!! Feels so wierd, like im 16 all over again, feels sad but oh my god I feel like a whole weight has lifted off me, feels good but still a bit AAAAARRRRRRRGGGGHHHHH!

Snow and Take that, my day is complete!

Yey, its snowing, and lots and millions of snow!! I love snow, cant wait to go tobogganing down the hill since our landlord said he will lend us his sled (although this is also the guy who says things like'okey pokey' so might not rely on him)! Sat in my room and looking over the park, dissertation is going nowhere!

Also, El has given me some extra special news – wait for it – Take that are touring next year – FANDABIDOSO! I loved Mark so much when I was lil, and he's not gay, its all in his head!! Grr, he's so pretty!

So, who was your fave TT babe? Baths: Warm and wet and make me happy!

Hmm, normally try to avoid the bath situation in my house, largely owing to the fact that a big hairy malting bear seems to live here and keeps losing its fur in the plug hole!! Also, been avoiding the bath today becuase I thought there was an animal in there so I waited for a chivalrous man to come along and remove it. Instead, Karl came round, but that was ok becuase it turned out not to be an animal, but a petal and Karl was able to remove it well enough!!! Petals in the bath, whatever next!

Anyways, had the most amazing bath, oils, bubbles, candles…the lot, I am clean and happy and warm all at the same time and there may be some OC fantasticness to be had tonight, think thats what sundays are all about!