As has already been commented on by some of my Silverstone–visiting comrades, yesterday's F1 test was excellent, and well worth the visit. It was the usual (free :–D) display of some of the most astonishing machines to ever traverse the face of the planet. I'm always taken aback by how much more sedate they appear to be on the TV in comparison to seeing them for real…but I guess that's the limitation of TV for you. I'm glad to say that, in my opinion, the V8s do not sound dramatically different to the V10s. They essentially make the same sound, and sing the same tune whilst zipping through the gears. Excellent. 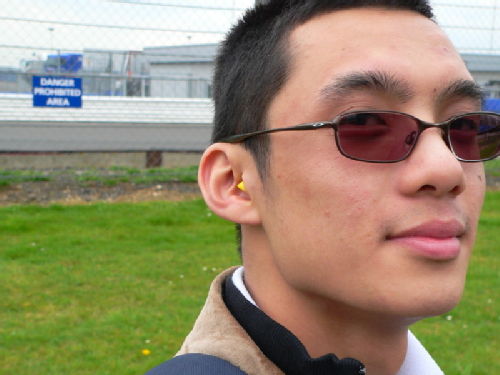 However, it wasn't all good news. Unfortunately they've repainted the wall down by Abbey, so the BMW–shaped mark I left after a 'slight off' earlier in the year is gone :'(. I was hoping it would remain forever, as a monument warning all purchasers of £200–eBay–specials to ensure that you never take to a greasy racetrack with slightly perished tyres… Garage 6B has housed some mighty race teams over the years, but alas, not today

Star of the show for me was the McLarens. They seemed visibly faster that the other cars, but I guess that could have been an illusion caused by their shinyness. They really are very photogenic, despite not being pretty racing cars in the traditional sense. The sheen gives them extra impact, compared to the flat, slightly dull finish used by the other teams. The STRs look good as well. I thought the design was a bit tacky when I first saw pictures of it, but when you see it hurling down the road at 160mph it is suprisingly effective. Poor old STR, why do they bother? If they go too fast then people complain it's because their V10 isn't restricted enough, and if they go too slow then people complain that they're rubbish. Disaster. Liuzzi does the business instead of lazing around on the pitwall

The Williams drivers who were here today, Webber and Wurz (both of whom are legends) also provided some amusement. For reasons beyond the scope of our knowledge, during the day's lunch break, they took a couple of Caterhams out for a spin round the circuit. I guess since these were the new CSR260s (you can tell….puts geek hat on…look at the squared–off front wings…), that there was some marketing going on. Both the CSR260 and Williams FW28 have engines made by Cosworth, so it would be careless not to milk that connection. I was informed that some fellows from F1 Racing magazine were also involved, so I guess we'll find out all about it in a future issue. We also spent some time up at Copse, which for most of the cars is taken flat out. It's hard enough to get through this blind, narrow corner in a road car at reasonable speeds; but in an F1 car, I believe they can take it at around 180mph. Respect. These guys know what they're doing. Montoya did have a few 'moments' through there, which raised our eyebrows a bit. It was quite a spectacle, to say the least. Juan Pablo bombs into Copse, no doubt wondering whether the back end will step out this time. The kid earns his money, that's for sure.

Hmm, I don't seem to have included any pictures of my beloved Williams lashing round the track…this will never do. Here's one from Luffield, leading onto the main straight. I thought this was an excellent place to watch the cars from; because here, you can see them accelerate at their most violent, and it's stunning. The legend that is Mark Webber displays some un-legendary driving...even the most fresh-faced members of Warwick Motorsport know that he needs to be tight on that kerb :-D

Take a gander at the Motorsport website for the rest of the decent pics, if you're interested…link.

To finish, Nathaniel truly gave the circuit's Audi RS4, used for corporate entertainment (not just for corporates though, if you've yet to spend the student loan on anything useful ;–)), some proper loving. Happily he refrained from actually licking it, but I'm confident he only exercised restraint because there were small children around at the time ;–) In short, I had an excellent day, with some great company and some unreal cars. The BURGERS OF DEATH weren't too bad either. What a combination. 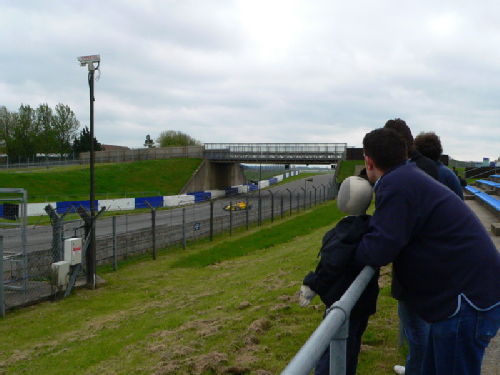 Am I going insane?

I turned down the opportunity to go to Silverstone today.

Today, a mate of mine, one of the most skilled drivers that I know, is giving passenger rides round the circuit, in his car.

Instead, I'm spending the day teaching myself topology and group theory.

If I don't get a First, it won't be through lack of dedication.