Follow-up to Unprecedented from Semi-Perfectionism

Not long to go now before the 2006 British Universities Karting Championship draws to a close on Wednesday, at Clay Pigeon Raceway in Dorset. So called because, unsuprisingly, there's a clay pigeon shooting range right next to the track. It looks like Brookes A have already got the championship in the bag, but behind them, things are fairly tight. Warwick A certainly have a chance of getting into the top 5 if things go their way. If they did, it would be a real acheivement – they've finished 6th for the past three years and have been a bit under-strength this season, unlike Warwick B and C. 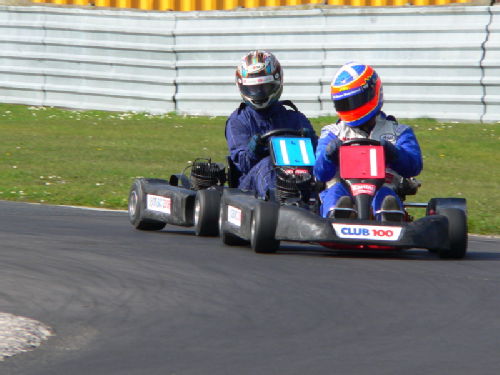 Warwick A (no.11) put pressure on Brookes A at last year's BUKC race at Clay

It looks like the Bs and Cs will certainly take their highest ever championship finishing positions as well. As I mentioned in a previous post, both teams have been much stronger this year than in previous seasons. I think the squad that we are taking to Clay is going to be a bit weaker than the squad we've taken to the other races, but they should still put in some decent performances. It will be interesting to see how all of the Warwick teams stack up against SiY's team as well, who will be making a 'guest appearance' in the BUKC. His team probably won't have the depth to challenge for overall success, but I'll be pleased if either the Bs or Cs can get the better of them.

On a personal level, as much as I'm looking forward to the race, it saddens me to think that it will (almost certainly) be my last BUKC race for Warwick Motorsport. I'm confident that I can get a decent finish to round things off. I also have some personal battles to deal with as well…I have friends from the Coventry and Birmingham karting clubs with whom I have struck up some enjoyable rivalries with, so I hope to end my BUKC career by utterly destroying them :-D. I hope I'll have the chance to race SiY on track as well…it will be interesting to see if I've improved relative to him over the past year.

Annoyingly I learnt some really useful driving techniques at the last race (why oh why didn't I pick those up when I was a fresher!?) and I reckon I'll be able to apply them extremely well at Clay. Especially if it's dry…I'm much better in the dry than in the wet; and Clay is much more of challenge in the dry. Since it's a relatively high-speed circuit (the average lap speed is around 45mph for a good lap at Clay, however Buckmore Park is the quickest BUKC track, with an everage speed of 57mph for a good lap…not bad considering it's got four tight hairpins :-o), it's much more enjoyable in the dry. When the rain starts to fall, the grip on the karts we use really suffers, since we exclusively use fully-slick, hard-compound tyres. Consequently speeds drop considerably, especially at Clay, where many of the corners are just flat-out in the dry. In the wet, instead of trying to nail the perfect line through these corners to carry the speed, it's more a matter of just staying on track. Which means going much slower than usual…which isn't as fun. It's still an enjoyable challenge though, of course :-D.