Now I can truely claim to be a Narcissist!

Congratulations You Should Be Looking For:
Jenny
Hard Luck Guys… Jenny's already taken… But a
lively character who will happily drink the
night away, just dont give her a VK or 4!

1st Date Suggestion – Hiding in the bushes with a
hammer waiting for her boyfriend!
Marriage Idea: Alcohol and a swimming pool… thank
god she's a lifeguard!


Which Benefactors Member Should You Try To Get Your Leg Over?
brought to you by Quizilla

The Gods, Heaven and Hell

I have just had the most cool idea.

Well, ok, maybe it's not totally origional, but I really like it anyway, so…

I have decided that there is not just one God sat in Heaven twiddling his almightly thunbs. No. Nor are there a number of Hindu Gods up there, twiddling their respective heads. No no.

In fact, all the Gods that have ever been worshiped are all up there together, sitting around, getting drunk on ambrosia and creating George Bush. Obviously, Chirstian God can't get too lashed on a week night because he still has so many people's prayers to see to. On the other hand, the Greek Gods can do what they damn well please, and the Norse Gods can wage war in Valhalla each day and get utterly trashed with everyone else each night.

Eros obviously gets a bit bored every February and pops down to earth to cause misery for all single people. Of course, Thor, Jove and Zeus get to have a bit of a get together and rain down some divine thunder now and again. The Egyptian Gods probably have their own little section because they all look a bit scary.

Hell, of course, would be equally eclectic, with the various underworlds all existing alongside each other. Satan probably shouts across to The Underworld now and then, "Oi, Hades, I'm a bit low on demons for stabbing and burning today, got any spare?"

Pictures to follow if I get round to it…

I'm such a child.

Sarah looked out of our window this morning and told me it had snowed. So I sat bolt upright, looked out of the window, noted that it has indeed snowed, and went hopping around the room like a three year old.

Now I'm going outside to throw snowballs at Sarah. Oh, the maturity.

Spell your name in drink…

Last week's lifesaving social was the birthday celebration of two of our members, Jimbo and Naomi, so we spelt their names in alcohol.

In this way, Sarah and I have been trying to spell our names in drinks:

Ok, so we got a bit stuck on mine… any ideas would be good, maybe we'll try it out at Varsity this week?!

Yeah. Well. I warned them.

The Warwick C Team came 27th out of 31 teams… Yeah, it was really bad.

On the other hand! The social was AMAZING! We, well, I got utterly trashed, danced to the Baywatch theme tune (twice) and then slept on the community hall floor. Which hurt, and is still hurting me… 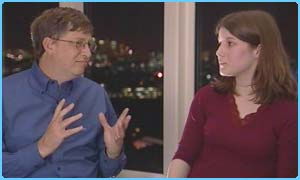 For everyone else, yes that is Bill Gates, check out the full story here

Have added more photos to my Lifesaving gallery from Brum comp and recent socials… take a look, they are beyond hilarious…

I know, I know, you're bored of my Lifesaving-related rantings.

I have a competition in two days time. I am captain of the C Team. I KNOW NOTHING. First Aid, bandages, knots, priorities, all have left my mind, if they ever actually resided there.

If you're bored of these rants, think how I feel!?!

Every sodding Thursday before I have a comp I am so damn scared! Surely this is not the point of competing? Isn't it meant to be enjoyable ?!