The Law of Mr Sod

And I was doing so well. So well. Id been eating sensibly, exercising every day, getting eight hours of sleep a night, and most importantly, doing about three hours of constructive revision a day (with a minimum of an hours faffing about before I actually got down to said three hours of proper revision. You know its been a bad day when the amount of time you spent pretending to revise outweighs the actual time you spent actually doing some work.)

My exam was Thursday morning. I got home Wednesday evening, after a sensible sensible day of sensibleness. I checked my emails, had a balanced meal that contained all the right food groups and colours and shapes, and decided to have a nice healthy and calming cup of chamomile tea as I looked over my revision notes before I had an early night.

And that, dear reader, was my undoing. Five minutes later, that soothing cup of herbs in boiling water was doing its calming and soothing thing all over my right arm. And because I was being over-eager, it wasnt just a normal-sized cup, but a huge oversized mug. Of boiling water. All over my arm. And did I mention it was boiling?

So, after a lot of deliberation/panic, I ended up in A&E at 11pm the night before my first exam, holding a bag of melting ice-cubes to my blistering arm, with a great red mark that we decided was shaped like a tree looking scarily like the Student Loans Company logo (and that also reminded me that was another thing I hadnt sorted out yet). Last time I managed to burn my arm (yes, thats right, last time), I managed it by leaning casually on the metal toaster in halls, which gave me an exciting U shaped scar not dissimilar to the Union flicky U logo thing. I am expecting a University of Warwick shaped scratch across my leg any day now.

So anyway, I finally got to bed about half twelve, with a big stinging bandaged arm. Well, youre thinking, thats a decent nights sleep, even if she has been branded in a corporate whorish way. Whats she whinging about?

And yes, it would have been if Liverpool hadnt chosen that night to win some galactic football tournament of some sort, and I didnt come from that area, and I hadnt left my phone on in order to use the alarm for the following morning. From about 1am I got a lovely assortment of drunken texts telling me youll never wak alon and come on reds and reds yeah woo, culminating a phone call at 3.30am when I was serenaded by wheeeeen you waaaaaaaaalk through a stoooooorm hold your head up hiiiiiiigh in uproarious drunken style.

So the upshot of that is that I turned up for my first exam, after a week of effortful virtuous living, bleary eyed and tired, without having read over my notes, and with my arm bandaged up.

And I was doing so well. So well.

Mr Sod, I salute you. You have won once again.

The long dark teatime of the bus timetable

This, in itself, is not a remarkable thing. I have sat many times for that amount of time upon the wall opposite my house, kicking my heels and cursing the bus company to hell and back, whilst minutes tick by and my life continues somewhere else without me. Every ten minutes, my lovely timetable promises me, every ten minutes you too can get on a bus and glide past Hearsall Common on your way to things glorious and new. Except it fails to tell you that three times out of five you too can sit on a wall and pull a muscle in your neck trying to crane round the corner for any sign of a doubledeckered vehicle – anything with wheels and a driver in fact – that will actually get you to the place you wish to be.

Anyway, rant aside, yes. My point was that Mr Bus Stop and I are old friends, and many a happy hour we have spent together. What was remarkable about today's little encounter was that the 40 minute wait was actually a scheduled 40 minute wait. In the middle of the day. Buses (supposedly) run every ten minutes every weekday, apart from this mysterious 14.53–15.28 vacuum.

So what happens in this time? It's too late for lunch, and too early for tea. What do the buses do? Where do they go, if not chugging by my house? Is there some mysterious bus convention where drivers impart the wisdoms of the bus world to the young and uninitiated? Or is there some secret rite, known only to One That Drives A Double-Decker, which must be faithfully observed during this period?

It's all very mysterious… (and all very distracting from revision, which is also good.)

… or indeed the 'thinginess of things.' Poosoc (poetry and society) people will know what that means. Or not. Depends how hard you were listening in an Emma Mason lecture…

Anyhow, Gibbet Hil bluebells today, at about 3pm. They're on the turn now, so get down there to see them while you still can. 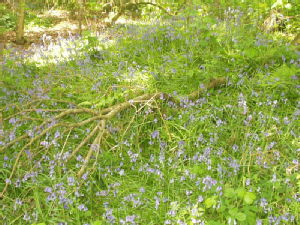 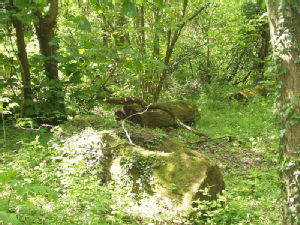 It's not bluebells, I know, but it's still purdy. 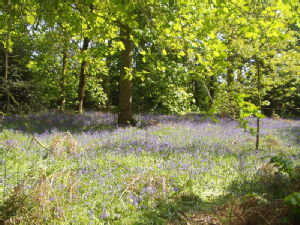 The end of the Euronovel affair

Yesterday, I dumped someone.

I'd been seeing them since the beginning of Easter. After we were first introduced at the end of last term, for a while I thought about them before I got up the courage to find out more. Then, over the holidays, we gradually became inseparable. They were the last thing I looked at at night, and the first thing I thought about in the morning. Even when I was with my friends, I was still thinking about them in the back of my head, though I couldn't talk about it too much to my friends, because they didn't understand. They said it was boring and didn't matter, and I should just go out with them and have fun.

And then term started, and a whole load of other things started happening. For a few weeks I didn't think about them much… although they were there, clingy, demanding my attention, every time I got home or was about to go out with my friends. They became an irritation, something to keep me awake at night, make me feel guilty. We only have two more weeks together, they used to say, before I have to leave. Surely you won't begrudge me that?

This last weekend, I tried, I really did. I spent hours with them, gazing into their eyes. I ignored my friends. I locked myself in my room with them, drinking coffee. We stayed up till late in the evening, and were up again at dawn. Every time I wanted to go out, they stopped me with a guilty look. They even made me cry with frustration at one point. Every second I spent away from them they reproached me for. And I came to realise that this was a dead-end relationship in which I didn't have to be trapped.

So I took the initiative. I looked at them, with one long hard last look, and then I let them go. I told them they'd used up enough of my life now, that there was nothing more I could do for them, and it was time for them to leave me for good. I wanted to go outside – I wanted to see my friends and go shopping and have a life, and they were holding me back. It took guts, I'll admit, and letting go was hard, but I felt so much better after I'd gone up to the English department, and handed in my essay, two days early.

And I won't feel guilty about those two extra nights I could have spent with my dear essay before it had to go; I won't feel guilty that I'll go and see a film tonight with friends I have neglected in the past week instead of spending precious moments poring over it; I shall simply smile and continue to enjoy myself.

The sun is shining, it is a beautiful day, and my essay rests quietly in the English office, neat and grave and pallid in its headers and footers. Do not mourn for me, it seems to say, for I forgive you.

I always suspected it was too pious for its own good.

This must be Thursday. I never could get the hang of Thursdays.

I overslept, have eaten half a packet of biscuits, and I'm not even dressed yet.

The fates hate me, obviously

Can anyone tell me why it is that for precisely the half hour in which I justifiably had to be outside and not in writing my essay (and not for any procrastinery 'we've run out of milk/bread/chocolate/caviar/small blue kangaroos called Bernard' induced reasons either) the heavens decided to open upon me and my lovely sunny clothes and assorted bags? Yet as soon as I got back under cover and sat down so my essay could glare at me, the sun was shining as if it had never been away.

So now, outside, all these happy shiny dry people are flitting about with tinkling laughs in the sunshine, all floaty and summery and dry, and I am stuck in here with frizzy hair in my steamy essay hellhole, surrounded by damp clothes and sticky-out umbrellas.

Just for the record, I hate you, yes all you happy shiny summer people – because you are essayless, you are laughing, and most of all you are dry. See how I shake my dripping and bent umbrella in your face with scorn. Watch it shake. And drip.