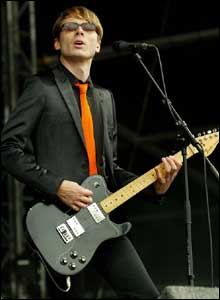 I don't think you could expect latter era Oasis to do any better than this. I still maintain that anyone who has heard Oasis cover Street Fightin Man will not be able to hear Lyla without wincing, but with tracks like The Importance of Being Idle and, crucially, no filler (something which let down an otherwise ok Heathen Chemistry), Don't Believe the Truth joins Coldplay in proving the value of having scrapped early sessions.

… because I left my keys on campus yesterday, and there's no one in my house except me for the next few hours – doh! Do I really leave my house on the latch and trust the people of South Leam not to break into whilst I trot off to Kingsway Community Centre polling station. I think not.

Looks like I'll have to wait a little longer.

But I guess the the question is, will Tony also lose his keys tonight and not be able to get back into No. 10? I think not.

Looks like I'll have to wait a little longer.

In other news, it's looking like Cholo is the place to be tonight. Entertainment, politics, good company and tasty beverages. It's the Students Vote, in association with your good friends at RaW. Woo!

Correct me if I'm wrong, but messenger programmes are designed with the expressed intention of bringing people together when they couldn't otherwise be brought together due to their slightly concerning habitual internet use. Their purpose is thus largely friendly.

However some people insist on taunting me with smug word count usernames, highlighting their superior ability to skilfully and precisely hit a word count. These people are scum.

Big surprise. Oasis have not managed the return to form they seek. OK no surprise there, but in fact they've done much much worse – Lyla, the new Oasis single (for I have acquired it) is awful. It sounds a little like their cover of Street Fightin' Man which appeared on the b-side of All Around the World, only with added quantities of self-parody, and worse, self-repetition (note lyrics about 'catching me if i fall' – I Hope, I Think, I Know off Be Here Now all over again). If we're making comparisons with recent lead singles, and we are, it's not a patch on Go Let it Out or The Hindu Times, both of which I quite like. Cue the comments about not matching their Definitely Maybe days.

Aaaaargh my three favourite bands are all preparing albums for release right now! Aaargh excitement! These guys went into the studio on Monday…

I present pictures of last night at Ramshackle. (Over there <-) 'Twas hearty fun. Carl Barat of Libertines fame hung around at the back of the stage and drunk beer a bit. They played Libs b-side Bangkok – woo! Apologies to anyone I didn't take photos of, and points to anyone who spots Chris getting close to Milly…

A lot of people have asked me "gosh how can we listen again to all those wonderful shows like the Arts Quiz and RaW Cinematic Hall of Fame"... a lot of people have also complained that there is nothing to listen to now that RaW has finished for the term. Well help is at hand! If you missed the RaW's fantastic speech radio (the bit I was responsible for at least), it's here , at least until we find a proper home for it…

Oops I did it again, I made a blog

I've made a blog, initially to upload 26 photos of Dan's birthday (they're over there on the left). What fun that night was. I also have 80 more photos (trigger happy that night) – msn me if you want more.