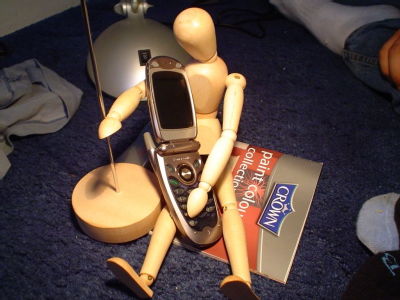 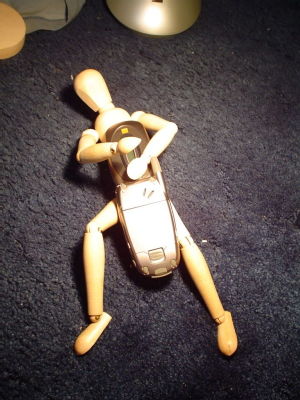 Billeh got into the world of drink rather successfully, possibly too successfully. As Peter Parker correctly observed in the last post, Billeh was indeed having sex with the bottle.

Billeh liked his drink so much that when it all ran out he could barely stand, sit or even lie down. He also was unable to see properly as we all know can happen when blind drunk, hence the term. He was so addicted to the bottle, that he would not realise what he was drinking. I'm sure this is another experience most of us can relate to. However, Billeh had this to the extreme. 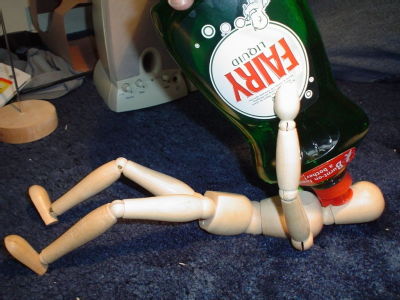 Sometimes alcoholics see the error in their ways when they hit rock bottom and find themselves in such desperate times and undergoing harsh experiences. For Billeh, this was it.

Extreme burping and farting which was wet and bubbly was on the cards for weeks afterwards. Coming out of an alcohol addiction can be difficult and often needs some kind of detox course, as with drugs. Fairy liquid is very good at detoxifying the entire body and giving it a good clean out, which is no surprise really.

The only bad thing about it was, it left a rather nasty taste in Billeh's mouth, worse even then alcoholic vomit. 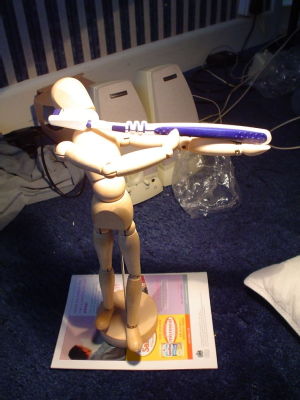 Billeh learnt his lesson, and he hopes that his bad experience will help prevent others from drinking excessively. Unfortunately, Mark and Dave, did not think this would do much. 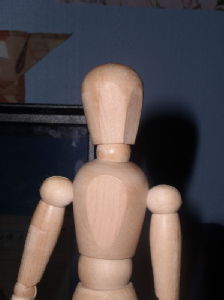 Billeh is an artist's wooden doll. He was originally made to provide artists with an accurate representation of human body proportions to aid them in expressing their creativity accurately. Some people such as Ikea felt that this was a rather boring life and thought such dolls could be used as ornaments. But, this is still a rather dull life. Would you like to be mashed into some random pose and just have people look at you, then not noticed you as time went on? I think not.

Billeh is different. He was born in Ikea in Walsall where he also aquired his name, inspired by Ikea's "Billy Bookcases". He was adopted by Mark Jarvis through the funding of Helen Ryan, and together with David Moxey, Billeh was named and set to experience a life different to any other artist's doll.

Mark and Dave endevoured to give Billeh a more fulfilling life then would otherwise be given to him. They also felt the need to photograph and video his progress. Now, some of his experiences will be shared with the world.

Being two fans of Jack Daniels, Dave and Mark felt the need to introduce Billeh to the world of alcohol. However, they felt that JD was far too precious to be given to Billeh since he may spit it out from the strength. Instead, we found some random miscellaneous foreign stuff belonging to one of Dave's hall-mates. 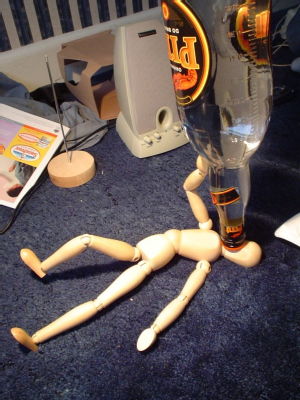 Infact, he couldn't get enough of the stuff 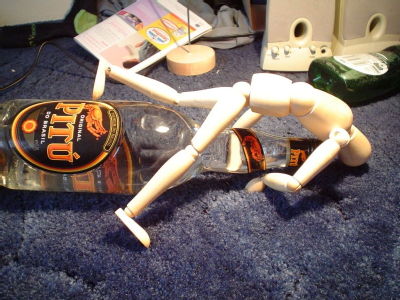 This was to be just the start of Billeh's interesting life. He went on to experience things that most other art dolls had never experienced before. Infact, most humans haven't either, and in some cases, most wouldn't want to.

Over the coming weeks, Billeh's World will be shared with the world. It may be slow, but hopefully it will be as worthwhile as Billeh feels the experiences were. Feel free to comment (University Members Only, please sign in).

The thing is tho, theres a fair few video animations I want to include but I dont have the webspace anywhere to dump video files. So I'm thinking of converting them into small animated gif clips (without sound obviously). This may do the trick for now.

So, I thought I would investigate how well Blogs handles Animated Gifs. I would guess a normal image referall would work fine but the blog servers can change the sizes of things for you.

Hmm, well the directly refered one works fine which is good. But the server resized versions buggered up. This means that the entire gallery that will contain the animated gifs will be screwed. Maybe the blog admins can look into that! The HTML coded resize worked though, but Blogs doesnt use that! Nevermind.

Yet more delays to Billeh World

I was gonna post some Billeh world images tonight but I can't seem to actually load any images onto blogs!! There are something like 30 images ready to hit blogs! Lets hope this uploading problem can be sorted soon!

Due to unforseen circumstances concerning various normal world issues, Billeh world has been put aside.

Technical issues such as the death of the computer containing the inspirational Billeh moments have delayed progress somewhat… (well actually completely stopped it!) There is also the presence of alot of Uni work amongst other things!

But be patient people, for Billeh is coming…

Also, another thing to look forward to is the drag racing and flying footage…

In either case, WarwickBlogs dont support video but I will see what I can do!