The week after I went to Sussex, me and me best bud Chris hammered the bikes and went randomly around roaming the streets of South Essex. We started with obviously south east Essex being where we lived and being kids at heart we went to a park. In the past we used to go to parks alot, they are good places to just randomly chat and have a bit of a laugh. Its a kids park with swings etc. and there were a decent amount of kids on the roundabout which we spun up for them. Later though, when the children disipated, we took it upon ourselves to do some EXTREME SPINNING. Several things come under this categorisation, including lying down face down with your upper body overhanging the edge so that if you cant hold yourself up, you'll get cut up! Thats something Chris does. There is also spinning it up very very fast and balancing yourself on the top outter bars using the spin force (Centrifugal Force to people in the know!). I invented that one, and here I am in action… 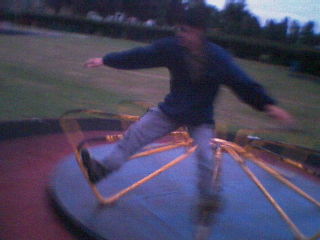 Another thing I tend to do is extreme swinging where I go up nice and high and lift myself slightly so that on the decent I slam down and send shocks through the frame of the swings. Chris on the other hand, had some trouble with the swing in the first place and got a bit tangled. Luckily Chris later got used to the swinging thing. But he has a slightly unusual way of doing it. 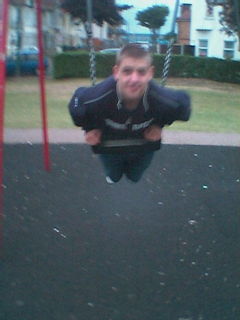 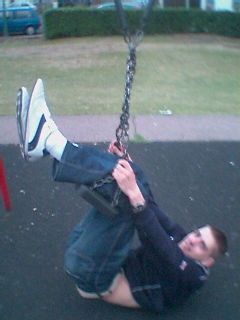 The next day we decided to make a repeat of last year and cycle to Hadleigh Castle – Our route. This involved cycling the entire seafront until we got to the boat yards in Chalkwell, then going onto Twotree Island and going most of the length of that. While we were there we noticed that the tide was coming in… very VERY fast, fast enought that you can watch it creep over the land. Quite spookey. 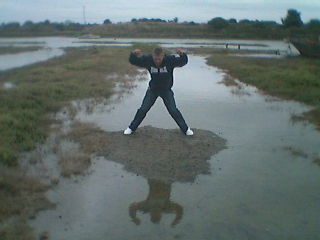 Anyway, we then cut directly accross Twotree island which is an island mostly of just grass and bushes and marsh where people fly RC planes etc. We cut straight through the grasses and aimed for the very distant Castle on the top of the hill a few miles away. This involved going through cow fields. We did this before last year and were shit scared because we were little pussies. The first field wasn't bad, then we got to the railway crossing. 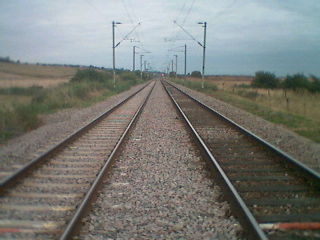 The trains here pass at about 70mph since its the longest stretch on the railway between Leigh-on-Sea and Benfleet, but we were not scared of the trains going past so fast only a few feet infront of us making a massive gale, huge noise and the ground shake… We were more scared of the KILLER COWS on the other side of the fence…(well Chris was, I'm a hard bastard obviously) 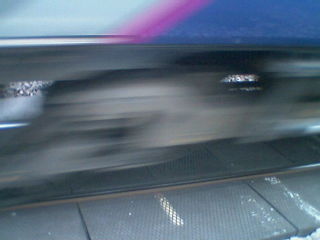 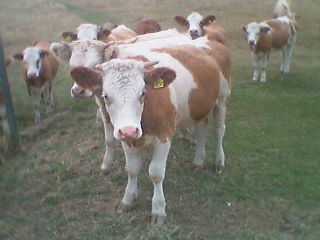 Well anyway, we got accross and then had to climb the massive hill to the top. Its a very serious ascent since you start at only about 2 meters above sea level and then climb to several tens of meters in the space of about a tenth of a mile. Ultimate "MegaRange" gearing is still incredibly hard to climb with. Once we got to the top though, it was satisfying. The view was good, although it was far better the year before with beaming sunshine. We went to the edge of part of one of the hills and looked parallel with the coast to get this photo of the main east tower ruins of the castle. Not a fantastic photo but I forgot to bring my proper camera so my phone had to do. Chris then decided to climb up the inside of the tower. 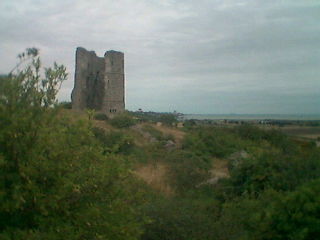 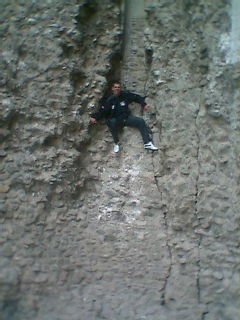 When we left, we went back a different route which involved dropping back down to sea level down one monster hill about a mile long. With pedalling at full blast and taking full advantage of gravity, some serious speed was acheived. Its always hilarious doing this though since the hill is littered with cow pats so you are always trying to dodge them, its also bumpy and often dodging cow pats also means jumping over them! We came accross some kids coming up the hill on bikes aswell and a classic moment happened where both Chris and I both jumped over a ridge in the ground at the same time and landed simultaneously at a speed fast enuff to hear the spoke on our wheels wiring. The kids just looked shocked! That hill was great. We then found our way home via a wheat field until we found Leigh-on-Sea train station. Then it was more urban and we followed the coast home in the evening.

The folllowing day, sparked from our afternoon in the park, we decided to get on the train to Pitsea where Chris knew of a really good park. I forget the name of it but it had rip-wires, a cable climbing frame, a tilted roundabout platform, a hamsterwheel and really unusual things like that. On the walk to the park there was a large spray painted cock on the ground which Chris decided to sit on… Knobend! 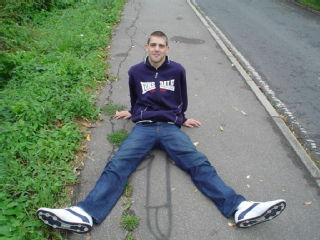 He wasnt quite so pleased later on when he got stuck. One of the "rides" is like a pole that stands about 8 ft high and can spin on its axis, but its slightly tilted. You sit at the very top of it and others can spin you around and rock it about. For something so simple its really shit scary! Chris almost shit himself and then got stuck trying to get off! 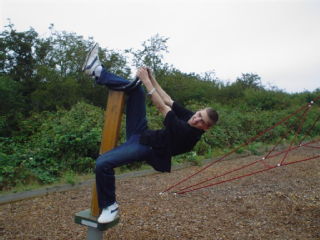 One unusual ride they had there was a raised roundabout platform which has nothing on it but is tilted. The fact its tilted makes is surprisingly hard to stay on it! Especially at the edges. I went on it and it was hard enough without Chris then coming and kicking it round making it jolt! I started to loose my balance and got thrown outwards but luckily I have good balance so ended up landing on my feet running! Chris on the other hand made a nice dramatic fall where he fell, slid accross it feed first, then kinda folded round the edge to land the other way around! We took videos of all this but all I can put on here are frame captures… 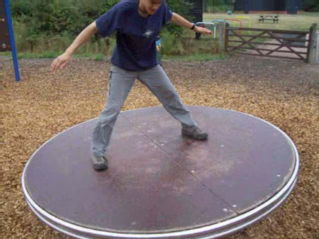 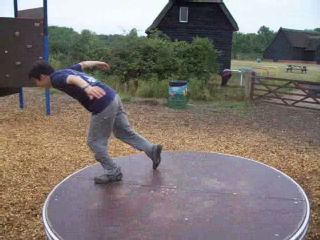 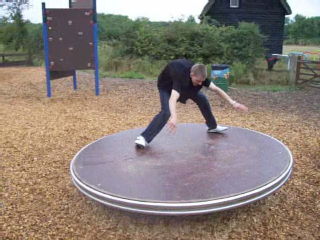 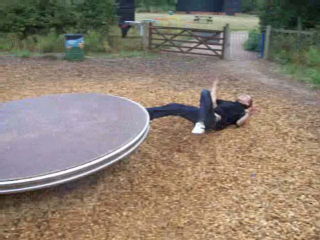 One of the really hard to find rides they had there was a human sized hamsterwheel!! It was great. There were a group of chavs there who thought they were great (as usual) but they tried to go upside down and just fell out of bounced about inside. They then left it alone with bruised bodies and bruised egos as EVERYONE watched them make fools of themselves. Chris and I had a go though, Chris spun it up and I went upside down multiple times! I could do it myself but could never go as fast as when Chris spun it! Its great fun, you can do it in line with the wheel when you do it yourself or facing out the side like here: 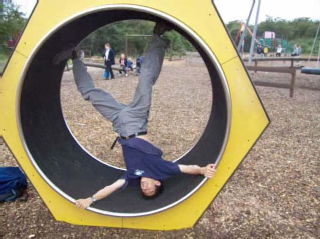 I would recomend having a go of this thing to ANYONE, its great!!!!
Anyway, numerous other rides were tried, including one whic is like 2 seats hanging from the ends of a beam of wood supported high in the air. As you rotate it the rope holding the wood winds up so you get higher and higher and eventually spin really fast in the other direction as it un-winds, fast enough that you are thrown out… or thrown off and bury yourself into the woodchip ground! There is much great childish silly fun to be had in that park!

After that, we went to tesco and got some food and drink, I discovered I love Orange and Banana Juice! We went home and that was the end of our few days of randomness. Soon to come was the week back in Uni where Chris joined me in helping out Helen with her landscaping. I'll write about that soon.