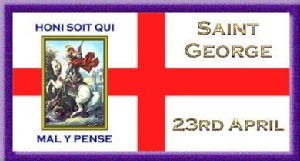 But seriously, all the other home nations make a big deal of their days, celebrate their nationality and generally enjoy themselves, especially St Patrick's day which even we try to celebrate! What do we do come St George's day? Not much to be honest. I mean I wouldn't be suprised if a good number of people didn't even realise it was! (Maybe I only remember because it's the day before my birthday..)

Even for the rest of the time, English people seem a lot less pround of their background. The Scots, Welsh and Irish all seem far more connected to their respective countries, and I get the impression that few consider themselves to be British. Whereas in England on the other hand, i'm sure there are a great number of people for whom when it comes to filling in the nationality part of any form there is always a 'British' vs 'English' debate in their head. We even have trouble trying to display St George's cross flags in public for fear of being branded as a racists! It's pretty ironic really that whoever it is that used the flag as a symbol of their racist beliefs (I can't remember exactly who it was right now) have really only been succesful in managing to rob the country of celebrating its individuality.