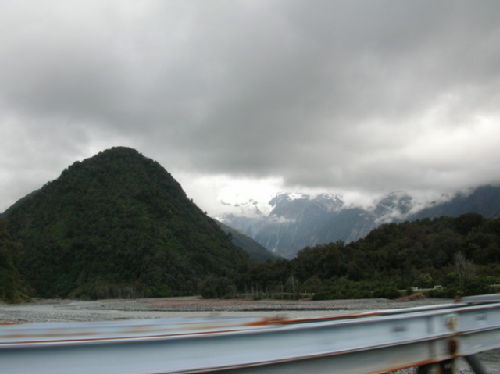 The journey from Maruia Springs was fairly straightforward. Gorgeous sun greeted us in the town of Greymouth, where we dined in a strange but trendy café-bar – it used 7” records for order numbers! We topped up on petrol, checked our bank balances and rode on through Hokitiki to Fox Glacier.

The hostel was fair enough, plenty of videos (yeh no DVD player in our little section of the complex), free tea and cheap internet. We ended up watching The Talented Mr. Ripley with a few fellow travellers (an American girl and a Scottish girl) as we both had booked the same morning trek on that big icy block less than a mile away.

The previous evening had been wet, despite all the sunshine during the day, and it didn’t bode well for the 7-hour expedition ahead. However, it was fairly clear but not quite bright as the morning came. The centre was opposite our hostel and it didn’t take long to sign up and collect our military grade leather walking boots for the day. 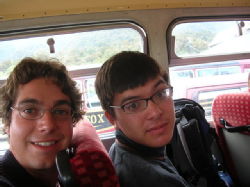 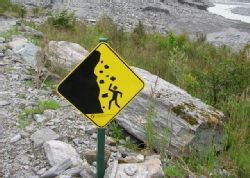 A good old fashioned British bus that looked like it came out of the fifties took us around the corner to the site of the glacier. It’s hard really to describe what it’s like purely in words. But if you look at some of the later photos for the dots that look like people. They really are people, and this glacier is really, really big. Even the cliffs at the sides were impressive, sheer to almost vertical, a huge chasm inbetween exactly where we were wandering up. 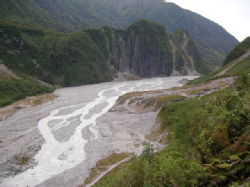 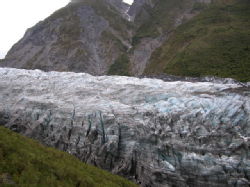 Our guide led us over a trickling stream up the less steep side of the valley, towards one of the passageways onto the glacier. It gave us great views of the valley but it also brought the first sprinklings of rain. By the time we reached the glacier, and it was time to put our spiky shoes on (okay, they’re called crampons), a shower was in full effect. 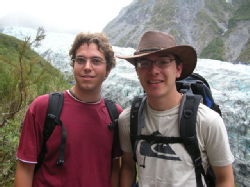 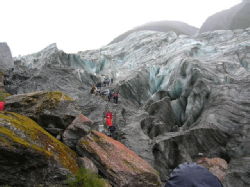 Under any circumstances this would be a strange experience but this was surreal beyond belief. Moments ago walking though some grassy forest, and then on to a great expanse of ice, every step and stair had been hacked away only a minute before by our guide. We were walking along where the even earlier guided tour had been, but even their tracks had been melted and reformed into new formations, and had to be reformed again by sharp metal forced points to make sure we had some way of continuing forwards. This mass, this creature, was continuously changing and rearranging itself, the guides often recalled how you could wake up one morning after, and the paths would have changed completely from the day before. 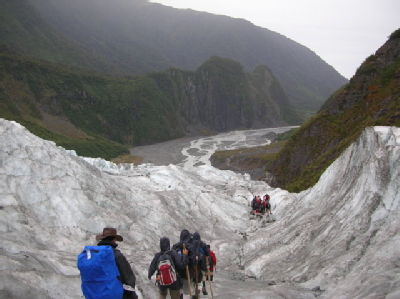 Today, our path was hard-going. Heavy raingear was on by now, and the cold was beginning to show itself. About an hour into the trek on the glacier, and we had to turn back. The rain was torrential, even our guides were losing their optimism, but it was still an amazing adventure out there. All the way back off the ice, we had to fight it, carving new steps, stomping our feet into the ground for sure footing, biting our teeth against the cold. Even off the ice, we reached the trickling stream we had merely ignored on the way over, which had now turned to a roaring river. By this time, getting wet had no meaning, nothing could be wet that wasn’t already so. We simply marched through the torrent, oblivious to any change in the current that had happened. 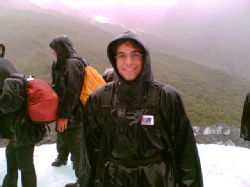 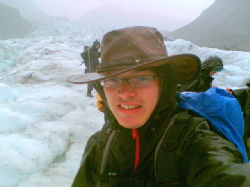 Apparently our ordeal was worthy of free beverages when we arrived back at the station, the weather still not letting up after all the barrage we had taken. It was all that we could do to just limp back off to the hostel, beaten by the icy fortress, and wallow in some typical self-pitying English comedy in the form of Blackadder…