After such an early morning and another long drive, we settled down at Anaura Bay, a short detour off the road south of the East Cape towards Gisbourne. And in settling down, we really settled down, pretty much dozing off for most of the day. We had beer, sunshine turning into stars, Guns n’ Roses playing from the car and the coast to ourselves. Not to mention getting to camp for free by cheating the system (behind the fence in the picture is the campsite where you have to pay, and behind the camera is the beach. Unfortunately, the morning after was a grey affair, but we’d had enough rest to prepare us for the four-day hike we were about to begin… Later that afternoon we arrived at the campsite preceding the very Eastern Point of New Zealand (or at least for the biggest islands of NZ). After paying the princely sum of $8.50 for our site (that was for all three of us, not each), we set out to explore the beach. It was windy, and flat, and completely huge and overwhelming. If it weren’t for the fact that it was so open and damp, there’d be a sandstorm all over. Either way, I spent most of the time either catching my hat or shielding my eyes from rogue sand blasts. But we weren’t here just for the beach, what with waves that would probably kill you, but to see the first sunrise of the day, in the whole world (for that day obviously). So after a not much later than 4am wakeup call, and 600 steps up to the East Cape lighthouse (which is damn hard when you haven’t had a coffee to start you up) we sat/stood in the wind and waited, and thankfully, the clouds kept away for just long enough to capture it wonderfully. So here you are… Photo of a Sketch of a Carving of a Heart A night of beer and fire television gave way to a noisy morning of a couple of cars driving down to our camping place, and then a flurry of Maori conversation (i.e. barely recognisable English, especially at 8 in the morning) led me to wake up and discover the fuss. A couple of Maori ladies were stood around waiting for their lads to come back from the coast, as they were fishing for urchins or sea hedgehogs or Kina (to call it by the Maori name). We shared a morning after beer and discussed the merits of how to eat Kina, apparently raw and with a slice of bread is particularly impressive. We would’ve shared Kina as well with this new discovery but it became apparent the fishing kiwis didn’t appreciate three guys chatting to their ladies. So with a breakfast of jam butties and kiwi fruit we sat by our tents and watched as a sackful of these urchins were individually prised open and gobbled up by these Maori. They eventually moved on so we could return to concentrating on doing nothing. You can see it ended up with Jonas taking a photo of me sketching Jens carving some wood… The north-east coast of the North Island of New Zealand is not particularly breathtaking in any unique way, there is just bay after bay of desolate beaches, mingled in between small Maori townships. It was perfect for us, as it gave us plenty of options for where we wanted to spend that night, pick out our own beach. We first stopped after a town named Hawai (yes that is spelt correctly), for a break and a breath of fresh (sea) air. As we were leaning on the bonnet of the car, another trailer pulled up, three generations of the family inside. The granddad and the father came out, leaving the kid to remain bored inside. They took a beach casting rod down to the sea, flung it in, and immediately took out a flapping fish. Before we had time to remark how quick it was, he’d taken another, and started walking up the beach a few metres to try again. He repeated this six times, catching six fish. He walked back up the beach and stunned, we obviously had to ask, how the hell did he do that? Apparently, what the father had thought was just the shadow of a cloud on the water was in fact what the grandfather recognised as a school of fish, extremely close to the coast. All that was required was to get something in there to snag one and you were on your way. I think because we endured his story (and slight boasting), we recieved two decent sized Kawahai, a kind of Australian salmon. Packed in a bag of seawater to keep it fresh (and another three to stop it dripping all over me), all we had to do now is find a way, and a place, to cook it.

Our road took us alongside a beach, midway between the two hamlets of Te Kaha and Wanarua Bay. A short track down to the beach allowed the car and us to hide beneath the shade of a huge tree. The coast was long and stony, full of deadwood and not much else, but it was perfect. A pile of bones revealed a possible cow skull for sketching and posing and became our mascot for the night. All that was left was to create fire, which man has been doing for aaages, so it was no problem. A few logs, and some thin twigs, and we had a fully-functional (read: explicably dodgy) grill. Jens took the unenviable task of gutting and opening the fish, and also took the task of cooking the fish and keeping the fire going. This wasn’t just because me and Jonas were lazy, but in some cases completely incompetent. The fire reclaimed some of our catch, but with tortillas, the remainder was a delicious meal indeed… The parentheses in the title are for Jens, who insists on saying ‘fishes’ and ‘sheeps’ for my English amusement. 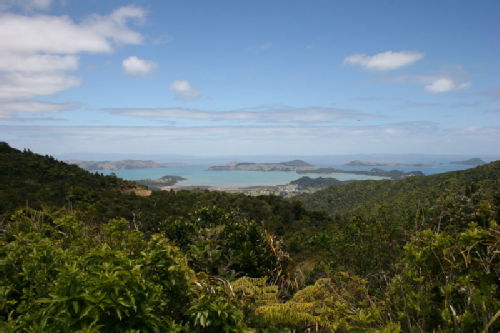 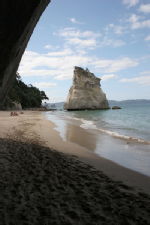 It took us two hours to get back on something that could be called a ‘road’. For that reason we stopped off in the sunshine on the east coast of the peninsula at the town of Whitianga. A choice fish ‘n chippery was located on the main stretch and then duly munched down on the seaside, shooing the occasional cheeky gull. It was pretty hot, and so a trip to the beach seemed pretty high on the agenda. And what better beach to visit than that by Cathedral Cove, a little further south, just a short detour from our planned route. I have visited and written about it before, but to actually be there with clear skies on a warm afternoon is a damn good reason to go and see it again. The only difference that perhaps detracted from this visit was that previously, our troop had almost been the only people there. This time, the beach was occupied by many a tourist, part of the sea and sand taken up by some kayaking company. Fortunately, the 30 minute walk to the beach seemed to have deterred some and it wasn’t actually hard to find a little space to lay a towel down and enjoy the remaining sun. Of course, a trip to the beach wouldn’t be the same without a tentative dip, dive, and swim in the beautifully clear waters. I think I had a touch of hayfever from the short forest/field walk and the rest of the afternoon was spent sniffling and sleeping on the beach. Not that’s a bad thing.

I woke up to find several hours had passed, the kayaks and half the people vanished and the sun hidden by the cliffs behind us. We were still a fair distance from leaving the Coromandel and had to set off quite promptly, but not before an ice-cream, obviously. We drove on south in search of a spot. It was beginning to reach dinner-time, my indie music collection wasn’t quite flying with the Germans and we’d just been shouted at by a drunk woman when we asked if there was a campsite nearby. We were reluctant, but eventually we relented as we passed by a holiday park, to actually go and pay for somewhere. Just outside, a group were practising Christmas carols, a strange reminder about what season it actually was, catching me a bit off guard. We headed in and pitched our tents, all the while Jens ranting about campsites, especially German ones. From his rant I caught that ‘typical’ Germans love taking over these types of sites over Europe and get very competitive about their campervans (well, and cars generally, seems one day of every week is typically reserved for a car wash/maintenance). Half the rant was kinda lost to me as he started barking impressions in German of his father whilst sat on a deckchair drinking a beer, but it got Jonas cracking up. Still, despite having no view, and surrounded by oversized caravans, there were good points in the fact that we could have a proper hot shower, use an actual kitchen, and enjoy some free fish dinner some of the ‘residents’ had left over from the gathering outside. And if we had no view, there was at least the chance of spotting shooting stars in the clear sky (once we had covered or turned the ground lights that were dotted on the tracks). I also managed to sneak a quick half hour on the internet, just to check it was still there. 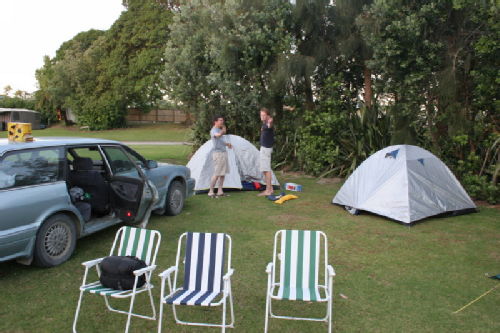 With the morning came another little surprise. We had free entry to the park’s on-site natural hot spa and swimming pool, and so we took advantage of the relaxed ‘10 a.m. checkout’ rule and meandered till midday to have our breakfast. In the spa pool, we had an interesting chat with a half Kiwi/Aussie guy who seemed to have his head screwed on till he started talking about devices that ‘restore energy’ by means of dragging a brass instrument behind a boat because it creates a ‘mystical vortex’. He assured us it was ‘scientifically proven’ that putting something very healthy near something not so healthy will naturally cure it and that these discoveries would solve the world’s energy problems. We naturally just nodded and floated on.

It was a great relaxing morning, compounded by bright skies and U2 (now from Jens’ music collection) proclaiming it was in fact ‘a beautiful day’. We grabbed a Burger King from the next city stop of Tauranga, loaded up on supplies and headed off towards the east coast and the furthest cape…