Wrapping Up The Weekends

So a few weeks back (again), we were hungry for another trip, but not eager to drive hours to get somewhere. Fourteen of us (Jörn, Jens, me, Sandra, Marieke, Maartje, Matt and Josh from the Coromandel expedition, Halli from the Rotorua trip, Ellie, Sam, Fiona and Jen the British girls and Frankie, another friend from the Railway) decided on a quick day out to the north-western beaches not far from the city of Auckland. What’s strange and impressive about these beaches is that they are covered almost completely in blackened sand. The visit is again marred by not the best weather conditions, but I hope I can wrap this little venture up fairly quickly around the various photos. 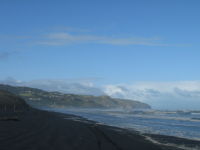 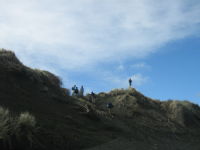 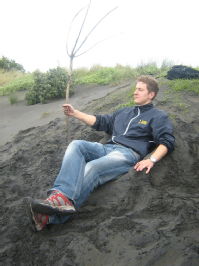 The first beach (the name of which escapes me completely) was a long slim but straight stretch of coastline, with a huge black sand dune marking the land side of the beach. With not a lot to do except wander along up and down, we soon got bored and explored the dunes. This was soon abandoned in favour of appreciating the sun while it lasted, and I made a little sun throne, for the occasion…maybe it’s still there… who knows? Matt looked the most regal whilst perched on it, I just couldn’t stop grinning (what’s new eh?).
Unfortunately it’s not long after when the rain starts, the tide starts coming in and we have to leg it down the coast back to the people carriers.

We slam The Clash in the stereo (woo! this one has a CD player!) and it brings the sun back out while we dig into some fish n’ chips (gee willikins, how English is that). After lunch, we head off again, to the next beach which gets a little bit more interesting. It’s Muriwai beach, and it stretches out much further than before, great areas of flat sand (and quicksand apparently) before huge cliffs in the distance. The long walk to the water is pierced by a strong wind which brings up the drier sand in little whirlwinds. With nothing to hide behind, we kinda walk backwards for a few moments until we get closer to the coast, where the sand isn’t carried up. 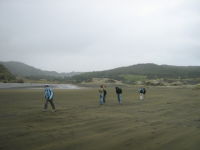 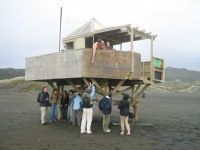 As with Coromandel, the Germans, Jens and Jörn decide that people should go for a swim… I mean, we are at the beach. Right? Josh and Frankie decide to join them, and they climb up to this abandoned wooden hut, erected in the middle of the beach, for a makeshift changing room. The scene is somewhat similar to Cathedral Cove, four bodies running into the water, a lot of shouting, and then a lot of running back. I didn’t manage to catch it on my camera because I was navigating Jörn’s while getting my feet wet (and extremely cold). Without further ado, the consensus is to very quickly warm up back in the vehicles, and motor off to the next checkpoint. The weather is alternating between great sunshine and overcast skies and spotting rain, and when we set off again, we’ve ran out of Clash, and replace them with the bouncy indie-punk of the Futureheads which relieves things a little for the next travelling duration. It takes a long winding drive down a gorgeous valley to get to our destination of Piha beach, but it’s a gorgeous view. 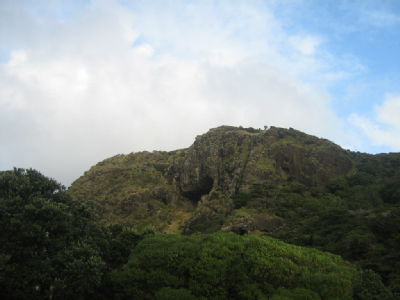 Piha is usually a sporting beach, but today, being still winter and not the best of weather conditions, it’s fairly isolated and left out bare for us to explore. This area is much larger than the previous two beaches, and we coss a little river a couple of times to finally get over to the ocean view. The area is so vast, and the landscape just spectacular, I just gawp for minutes on end, wandering towards a rocky outcrop that heads out into the sea. Naturally, we head out as far as we can, the heavy waves crashing a few metres below. We time it right, as the sun is just about to set, and I manage to grab some photos of the shadows of the surrounding cliffs on the beach between.

I’ll leave you with some photos of ‘spot the people’ from the same beach just to give you an idea of how large and open this area was. It’s possible we’ll come back here in the summer, when swimming in the sea might actually be a viable option. We didn’t manage much else on the journey (not even to climb up to the Lion’s Rock, which I think is pictured above) but it was better than moping about in the halls, playing table tennis, or heaven forbid, writing on my blog… 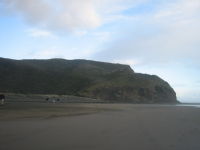 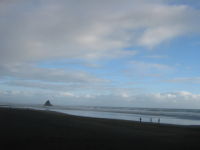 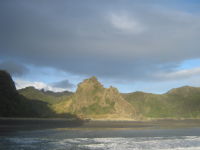 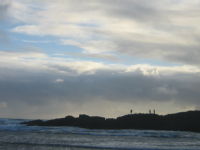 I’m heading out to Great Barrier island next week for a few days, so there’ll be some proper adventures soon!

And another thing, apologies to Jörn (Shaun), Marieke (Marika) and Maartje (Marsha) for whom I had no idea about the names and just kinda made them up…why can’t you all have English names! Like Brian! and Alice! Just kidding…