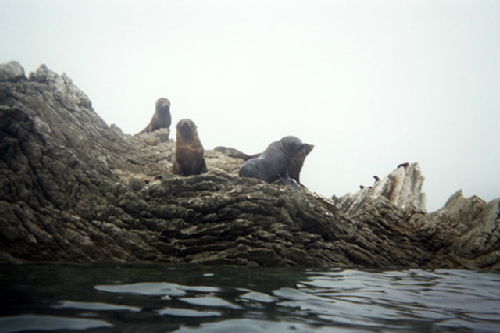 As I said in the previous entry, I booked in a seal swim not much longer after the dolphin encounter. Florian had arrived and he was on the dolphin trip while me and Sam took part in this. It was a lot less busy, a bit more personal and ultimately just as interesting.

Instead of heading out to the sea, our motorized dingy took our small group out to the very tip of the rocky ground that makes up the Kaikoura Peninsula, which I had ambled along during the previous week, albeit a little further inland. On land, seals can be seen as pretty rough and lazy creatures, but there’s much to be said when you catch one taking a dive. First though, we had to get near them.

We disembarked the boat in all the appropriate gear and made our way to a small inlet between the rocks. In an attempt to not disturb any of these huge seals, we effectively commando crawled through shallow water towards the little islands they appeared to inhabit. It was pretty tough on the hands and knees, even with a wetsuit on, and with the tide trying to nudge you into the walls, it was a more enduring experience to the open water meeting with the dolphins. 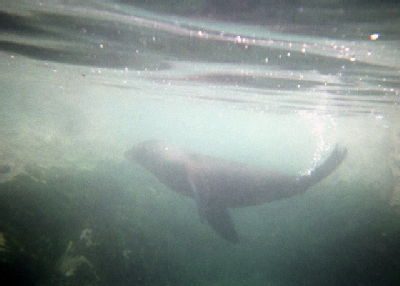 We reached a deeper pool in amidst the rocks, and as we were looking around for some that were ready for a dip, two started fighting right ahead of us. Lots of growling and slapping later, one pushed the other into the water and it rushed off to perch on another island before we had chance to take notice. It wasn’t long though before our guide started pointing out seals that were tired of not getting any sun (it was quite overcast on that day) and decided to jump in. I ended up out of the rocky outcrop altogether watching one seal as it glided about underwater, trails of bubbles as it swept past, almost directly aiming for me at one point. 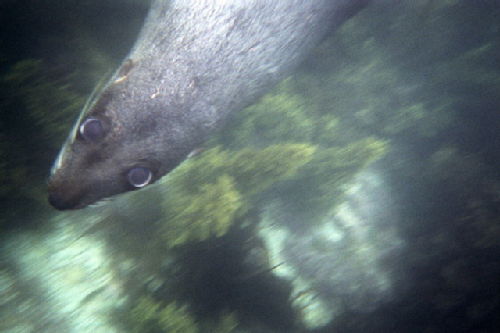 We had another underwater camera, and I managed to get one great picture again to illustrate just how huge their eyes are underwater. I’m quite sure it was another fluke, because this was taken as it just swerved away from me during another imminent head-on collision. Either way, it’s fair to say that on land, these creatures may seem little morose and uninspiring, but that isn’t their game. Underwater, it’s a completely different scene, and another fantastic one at that.