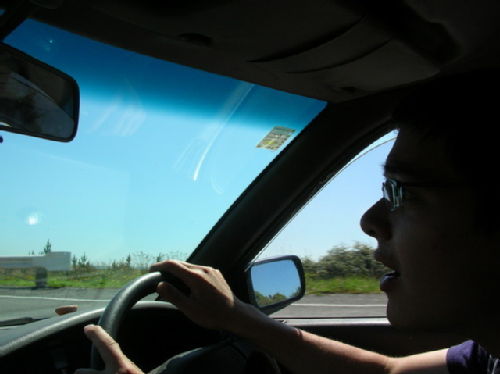 After the relative high of grabbing some water time with some amazing sea mammals, I met up with Florian (who had just finished the dolphin encounter), said goodbye to Sam, and our hosts at Cray Cottage, and hit the road with a vengeance.

We had a vague idea of what we were going to do and where. We had booked a glacier hike for the morning of the 13th (we’re not superstitious folk) so we had to go cross-country to the west coast to make our appointment happen. We decided a good halfway point would be the haven of Maruia Springs. A privately owned set of spas and hot pools, where if you go for the (unadvertised) camping site, you get free access to in the evening and morning after. The weather was a little overcast still, a few spots of rain interrupted our coffee break but didn’t dampen our spirits as we found an amusing sign name to pose stupidly in front of. 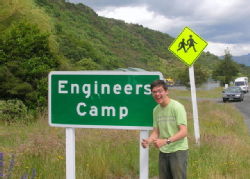 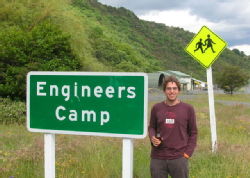 As we arrived at Maruia Springs, the clouds just managed to part enough to show a bit of that bright blue sky we’d been desperately lacking. It was also enough time to put the tent up and figure out what we actually got for our money.

What we got, was quite a lot. The first area, was a series of large outdoor rock pools, naturally heated by the hot springs by the mountain but also a very unnerving murky black colour. The colour wasn’t the first thing to hit you though, it was that beautiful sulphurous smell that accompanies all things geothermal. Then the next things to hit you (or bite you) were the sandflies. Anything above water was fair game for these little minions of evil.
Eventually, we gave up with the pools, and took an invigorating massage (it literally felt like pebbles rolling down your back) from a cold waterfall nearby to clean up (it helped keep the sandflies away as well). The weather had turned again, so we moved swiftly on to the other main section of the spa, the Japanese bath house.

Japanese bath houses are different. You have to use these strange little showers before and after entering the pools, and you get this little stool to sit on, and a bowl for pouring water over you. But it was a complete haven away from the rain and sandflies. It was complete luxury to lounge in a hot pool gazing out at the mountains through a huge window listening to the pitter patter of the rain on the glass. I’m surprised I never shrivelled after staying so long in these pools, but it was beginning to get dark and we hadn’t eaten yet.

Our late meal was again a triumph for sandflies, we were reduced to eating our meal in the car, beer in the drinks holders and squishing bugs against the windows. It was a mutual consensus that we’d leg it to the bar inside the complex and stay there for as a long as was deemed reasonable (by the staff at least) before making a break back to the tent. 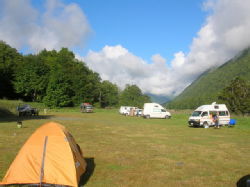 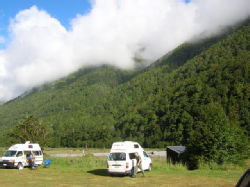 The morning after was much brighter, and lot more pleasant, though still not without its share of those little nightmares. We had planned an early departure, but sod that, we still had free access to the bath house, and that became an almost definite requirement in preparation for the next leg of the trip, across to Greymouth, and down the west coast to the glaciers…