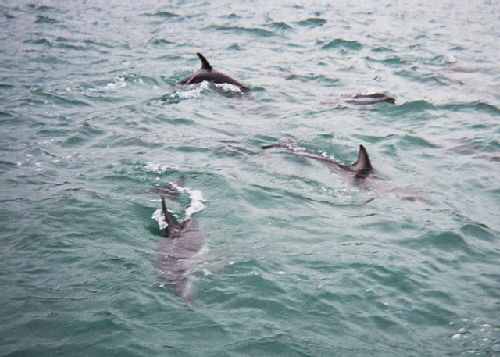 5 o’clock is not a normal time to wake up, but on that day I was going to squeeze into a wetsuit and jump in to deep water to swim with dolphins. With my student loan in tow, it didn’t take long for me to start spending it, I had also booked a similar seal swimming event on the 11th, because Florian had arrived, and that meant it was time for me to go on a road trip. But that comes later, for now, it was time to get wet.

The sun was still preparing to rise when me and Emma (a Scottish girl from Perth – yes the other one – who got to Cray Cottage a few days before and had started working three jobs since then) arrived at the ‘Dolphin Encounter’ centre. There were a few other people milling around as the sun peeked out from behind the peninsula and the staff finally opened the doors. A whole troop of swimmers eventually gather to collect their second skins for the morning. Getting into a wetsuit is a tight fit because these ones are a bit thicker to give an almost lifejacket-esque quality. And for the time being, it was also warm. There was 10mm between me and the water so I was hoping it would stay like that.

After a brief about safety and expectation – they pointed out you were there to entertain THEM, not the other way around – we were carted off to separate boats. Ours happened to be the smallest and quickest, but unfortunately also the lightest, as it bounced over the swells making Em a bit queasy. There were no spectators on this boat as was usual with the larger vessels so looking like a ridiculous rubber seal wasn’t exclusive to anyone.

The boat first spotted a pod of Hector’s dolphins, they are smaller, and have a more rounded ‘Mickey Mouse’ fin shape. They are apparently quite rare for the area so we did best not to disturb them. Our target was to find the dusky dolphin, larger, and more acrobatic… 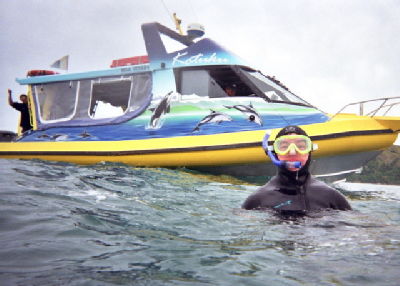 Finally our time came, hoods were donned, goggles strapped on and snorkels clasped between jaws. The klaxon on the boat signalled our time to jump ship. I was one of the first to slide in, face straight down I kicked away from the boat. It was hard work. Large flippers and buoyant wetsuits make for a good floatation aid, but damn was it difficult to manoeuvre. When the dolphins finally came after a bit of flapping around, they darted around, making a mockery of my feeble attempts to try and swim in a circle, or any attempt at trying to dive. It was fascinating how agile they were, coming but an arm’s length away and then shooting off again. All the tactics were put in place to attract them, swimming in circles, diving, singing through your snorkel (that got a few laughs from some of the spectators in the other boats) but as any intelligent species would be, the dolphins got a little bored with our antics after a while and took flight. 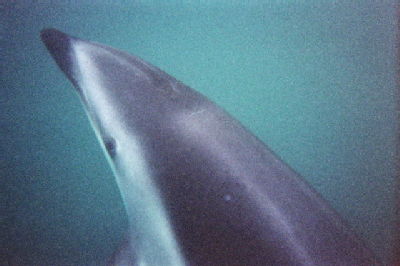 We managed three separate occasions to meet up with the pod of Dusky dolphins, and I managed on only one occasion to grab an underwater photo worth keeping, they were that frisky. Em had been a little too queasy by the second trip off-boat, and so by the time we all returned for the final time she was not in a pleasant state. However, it was by no means over yet. There was still the aftershow dolphin party.

Our boat joined the others and we found a huge pod of dolphins on the way back up the shore. Over 200 of the magnificent creatures were swimming, jumping, diving under the boat, and generally just being amazing to watch. They seemed to be having competitions with flips and jumps simply for their own amusement, none of this was staged, there was no bait, no encouragement, it just happened there in front of us. If I can figure it out, I’ll post a video I took of them to show the action, but for now, here’s a set of shots from the spectacle (bigger versions in the Kiwi Summer gallery)... 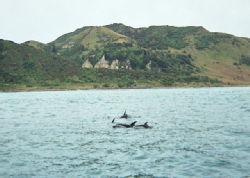 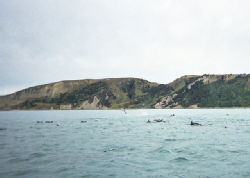 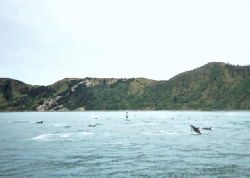 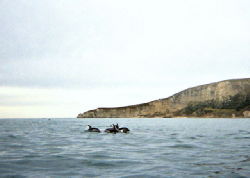 After all that, I was pretty excited about the rest of the summer, because it definitely only the first spectacle of many…