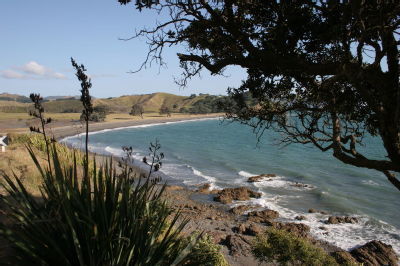 Travelling again, what can I say? The scenery towards the Coromandel was as beautiful as always, it helped that the sun had come along for the journey and we were still fresh from our initial rest back in Auckland. The only real difference I can muster is that the waters were greener here, and maybe the beaches were brighter. 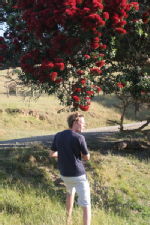 After a burger stop in Thames, we paused briefly in the strange town of Coromandel, which had a fake air of tourist-ness about it, with Cowboy western style billboards above the shops and it was almost too clean for a town that was almost nowhere. It was pleasant enough, it just didn’t seem like this was how the town had always existed, and any original charm had been laminated and painted over in bright primary colours. We moved on, past the collection of homes called Colville and on to a real unsealed coastal road, towards the very tip of the peninsula. There were old Pohutakawa trees (another one for the Kiwi encyclopaedia) lining the side of the road, hungover with their wrinkly branches, almost sculpture like in some of their appearances. Goats and bulls idly appreciating the view with us as we passed by. Stony bay after stony bay passed until we eventually headed inland, up through the valleys where these gorgeous trees were in blossom, their strong red flowers really an amazing sight. It’s hard to keep describing things here without falling back on my key words of surreal and crazy or Microsoft Word’s various synonyms.

We made it down to the furthest bay accessible from the west, Fletcher’s Bay, a quiet campsite in the middle of a bay between two large hillsides. First thing’s first, as was dictated by the agreement we made before our journey, we have to get the campchairs out, line them up facing the sea, and open can of beer. Marvellous. Perfect. Life of Riley (and whatever other Lightning Seeds hits you can think of). The best agreement I could ever hope to make anyway. 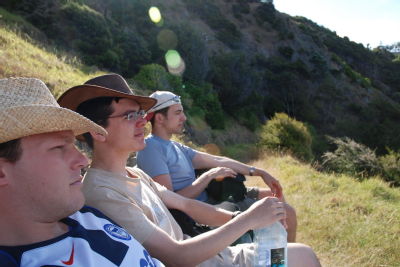 The order has to go like this, beer, tents, food. By the time we began to prepare the food, the light was fading and the wind began to pick up, but more on that later. The sky was clear, and stars began turning up as we munched on our Salami Tikka Pasta (don’t ask). Not quite as brilliant as the Pinnacles view, but getting there. In the distance you could just about see Great Barrier Island while the light still lasted, seeming to be only minutes away before remembering the bloody 5-hour barge we had to endure. I should mention that my Australian friend Jono let me borrow his tent (although how I’m going to get it back to him I don’t know), and it’s been a godsend, easy to use and hopefully will last the whole summer. Unfortunately on this maiden adventure, I completely ignored where the wind was blowing and put the tent up in a random direction. The wrong direction. All night the wind battered the side of the one-pole tent and pretty much inverted the shape of the thing, with me still inside. I did eventually get bored of having a tent as a second sleeping bag, and rotated it at something like 3 a.m., when the stars really came out. 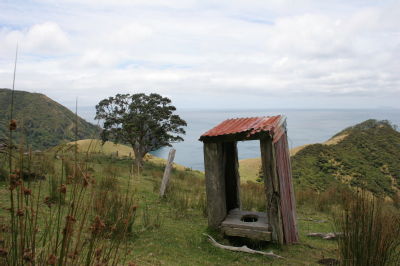 It wasn’t a pleasant morning after, but jumping in the sea as a primary activity definitely made it fresh. Our goal was to complete the Coromandel Peninsula walkway loop of about 6 hours, so naturally we got up as late as possible, and began just as a scout group were arriving in from the other side at Stony Bay. The walk began in English farmland, sheep and cows what sheep and cows do, all over the hillsides. The wind picked up and Jens almost lost his hat amongst the fields. Mine was firmly wedged on my head. Further along there was this rather fancy toilet that for some odd reason looked abandoned, but it sure beats that one in Trainspotting. Over the top of the peninsula, the English surroundings gave way to jungle like flora, leading down by steep rock paths that were supposedly called a mountain bike track. After passing a stream, the jungle gave way back to farmland, and more Pohutakawa sculptures lining the path. And suddenly, we were at Stony Bay, and it was a pretty accurate description. Again more sheep (or ‘sheeps’ according to Jens, just like ‘fishes’) hung around for our lunch, some accompanied by riding gulls. Jonas spent about 20 minutes throwing sticks in various directions in an attempt to herd some sheep together for a group photo, unfortunately now without bird partners, but the result is quite sweet. 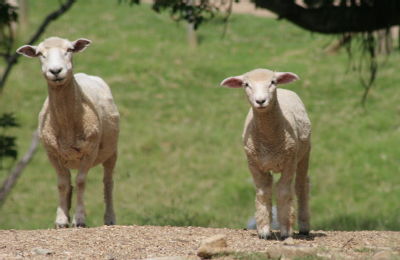 Leaving the picnic area, and heading back on the coastal route, we passed a kid travelling with his grandpa. It was quite an amusing return back to those trips when you young, completely deferent to whatever was going on around you and just concentrating on when you were going to be ‘there’, wherever there was, and generally being a pain in the ass. Haha, I can’t say I never feel like that now, but right now I was just enjoying the ever-changing surroundings between jungle and forest as we made our way around the hills we had spent the early afternoon trekking over. For that reason it took a similar time, a longer but easier path, with various sidepaths showing off the clifftop views. I have to mention not having a camera is still a pain, because I’d have to wait every five minutes whilst Jens or Jonas or both of them were fiddling around with settings and lenses trying to catch a good photo. It is definitely worth taking the time though because if you’re going to capture it somehow, it may as well be decent. 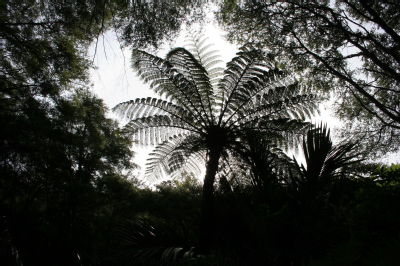 The sun began its descent and we just made it back in time to cook dinner in light. That wasn’t before a very cold shower in the outdoor cubicles, not quite sending me numb, but bloody cold nonetheless. My tent newly orientated, the wind didn’t quite make a mess as the night before, and I managed to get a bit more sleep before we arose to peanut butter and jam sandwiches (umm, just jam for me thanks) and kiwi fruits for breakfast. We had to travel the road (or track might be a more appropriate term) we came in on, but at least we managed to dodge the owner from collaring us for our second night’s fees. We were now on our way down the east coast of the Coromandel peninsula, and heading for whatever we could find by the time it was dark…

_Damnit, whoever screwed up the centring of images needs a slap :( _