After a gruelling 9 months of work, I am happy to announce that the 2020 Warwick iGEM team has been awarded a Gold medal at the recent, virtually held, iGEM Jamboree! Despite a lack of lab access throughout March to November and having to work across various timezones, we developed a colibactin derivative biosensor that would ideally aid in the speedy and non-invasive detection of colorectal cancer.

Unfortunately due to COVID, most of the iGEM process was done entirely at my bedroom desk... so there are not as many interesting pictures in this blog post as I would have liked.

Though without lab access we were unable to create a physical prototype of our biosensor, we were able to utilise in silico protein modelling software to create a theoretically functional receptor. In a wet lab, this could be converted into sequences to grow in bacterial cultures to produce our biosensor. Afterwards, we would have tested our biosensor's accuracy and activity e.g. false positives, using different ligand concentrations in cell-free systems. Following a few more refinement and design cycles, we may create an even more sensitive biosensor.

The proposed implementation of our biosensor would be as a complementary test kit, initially in conjunction with current tests carried out in the UK and many other countries - such as the FIT or Fecal Immunochemical Test. After further testing of its accuracy and usefulness to benefit healthcare, our big-picture goal would be for our test kit to be used on its own to pre-emptively measure risk of developing colorectal cancer, therefore allowing earlier treatment and improved patient outcomes.

I am incredibly grateful to have had the chance to represent Warwick at this international competition, which I had known about since my IB years at SOTA. Back then, I read about the amazing projects the teams were getting up to with awe, never imagining that I would be able to do the same!

At the iGEM Jamboree, the first-ever virtual one (where in normal years the team would fly over to Boston, Massachusetts to present and defend our project in front of a live audience and judging panel, as well as take part in a multitude of workshops and poster presentations) we created a 20-minute video, presented for 20-minutes for a judging panel, and created a wiki from scratch outlining all aspects of our project. As the Jamboree occurred in November 2020, I was still working on the iGEM project during the first half of Term 1 of my final year at University. I had to juggle lectures, assignment deadlines and Society responsibilities along with plenty of iGEM work, in the hopes of earning us a Gold medal. Additionally, as we were a relatively small team of 9 this year I was tackling entire branches of the project on my own. Thankfully my effort (and lack of sleep) paid off, as the two areas of the project that I did, Human Practices and Education, were the two criteria that qualified us for the Gold medal! In fact, several members of the Judging panel specifically commended Human Practices in their judging feedback, which was incredibly rewarding to read after all the stress and hard work.

It was also a great experience to be able to work in a multi-disciplinary team in an academic setting, as our team had members from Life Sciences as well as the departments of Mathematics, Computer Science and Economics. This required us to work extremely collaboratively and make sure that we never got too lost in the technical jargon of our respective fields in order to function as a group, which I felt was very useful in preparing me for work after graduation - even though I aim to pursue a career in biological sciences, "Biology" is becoming increasingly interdisciplinary both in the directions of hard sciences like Math and Physics as well as the social sciences like Economics and Psychology.

Having to work on the project virtually was another challenge - admittedly our team had some initial issues making sure that everyone was on the same page early in our project, problems exacerbated by us living in a range of different time-zones. Due to other responsibilities some team members had taken up during lockdown it was also incredibly difficult to get everyone to meet with video calls to keep up with progress on our project. I eventually figured out a shared spreadsheet for all members, writing down a list of actionable steps for every member of the team along with suggested deadlines, which appeared to work for the most part. Though it was quite technologically complicated and awkward leading the team in this way, it was still a useful idea for virtual working which I was able to gradually refine over the months of the project, and will likely be utilising for future group projects as we are still working from home in the UK.

As I am interested in pursuing further study/research in Neuroscience, I actually applied to join the iGEM team hoping to be able to create a neuroscience-related project, though of course I knew it wouldn't be guaranteed and would have to be a subject agreed on by the whole team. During the interview, we were actually asked to come up with and briefly research a potential synthetic biology project on the spot, and complete a short presentation on our idea within 20 minutes! In the mad rush that ensued we created an idea for a colour-changing sticker that could detect levels of lactic acid (a waste product of the bacteria that cause milk to spoil) and tell the consumer whether the milk had actually gone bad and could no longer be used. The goal of it was to reduce food waste and reassure consumers, as currently all we have to go by is the "best before" dates printed on the carton.

This project then evolved into another food project - we broke into subteams and created presentations for a range of potential projects: from microplastic pollution, to a vegan and ethical synthetic egg substitute for baking, to a probiotic food supplement that could "re-balance" the gut microbiome and improve overall health. Funnily enough, it was the smallest idea that didn't have a presentation that eventually became out final project - which was to engineer a colorectal cancer detection system.

As part of the Education and Science Communication efforts of the project, I was able to interact with iGEM teams from all over the world via virtual meetups. It was a great experience to see how other teams worked on their chosen projects, and it gave us the chance to share science casually in a way that we would have if COVID did not put a stop to the usual in-person iGEM Jamboree! Though virtual meetings simply cannot replace the immersion of the normal iGEM Jamboree it did allow us to take part in and host even more international events throughout the Summer, without needing to spend money. 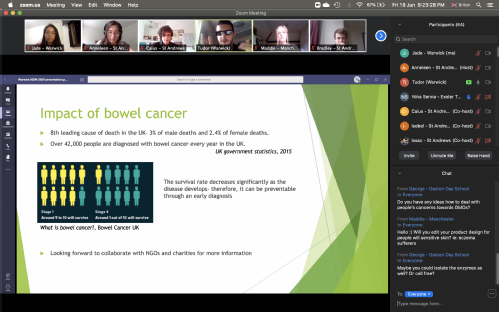 Presenting our project to the other UK iGEM teams at a meetup hosted by the University of St. Andrew's team 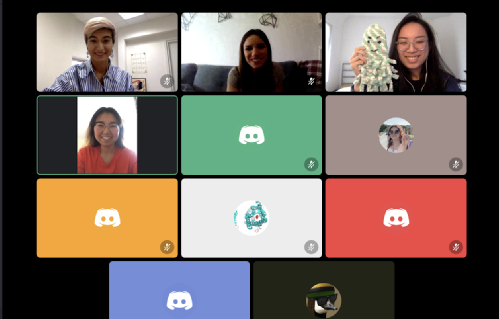 Warwick-hosted meetup with other iGEM teams in the Diagnostics track.

I was also able to present our project to incoming students at the Department of Life Sciences as part of the Fresher's orientation week events on student research. Hopefully it got the new students excited about the amazing opportunities they can try out for in their time at Warwick! 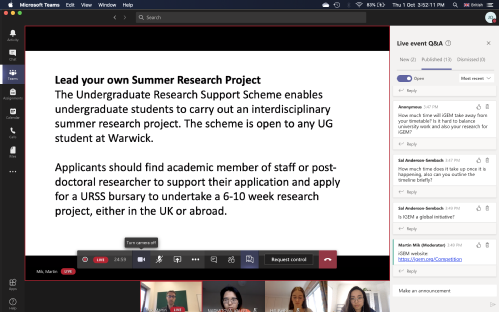 My favourite work done for the project was definitely the Human Practices. I enjoyed it immensely as it gave me a taste of what "real" science would actually be. Although I enjoy my laboratory modules in my degree and they definitely contribute very much to my learning, the experiments done are largely planned for us in the syllabus and have been repeated across the years as they are effective for teaching us students foundational techniques and knowledge. However, if I were to successfully go into higher education and research in Biology, I will no longer have the privilege to have my projects nicely planned out and curated for me!

Tackling the iGEM project's human practices gave me insight to more of the full process of science, including seeking and applying for funding with a self-proposed idea, considering the social, ethical, safety and legal implications, developing the idea (including deciding which softwares to use, which stakeholders and organisations to interview) and doing market research in order to find out how our final test kit could be best implemented. I delved into legal documents and policies, economic and business analyses, and sociological and psychological papers that were all relevant to the issue of cancer testing kits despite their seemingly disconnected fields of study. One aspect I found particularly interesting was researching why large numbers of at-risk individuals refuse to or avoid taking the current FIT kit, which is already non-invasive and relatively speedy. As I usually read scientific papers for my modules but enjoyed doing the Humanities back in IB, making sense of social science research papers was an exciting challenge.

Another challenge I faced was the building of our wiki - as I was not well-versed (i.e. a complete beginner) at HTML code and website building, it was tricky attempting to put my pages together! Luckily I had friends who were coding experts who were able to help me out, and I eventually started getting the hang of the basics.

To wrap up all the information I had gleaned from the entire Human Practices branch of the project, I created various reports and comparisons, as well as an overview timeline of our process, all of which can be seen on my wiki page here: https://2020.igem.org/Team:Warwick/Human_Practices . As we weren't able to test our product in a lab due to COVID, I hope that by making all this information available (and hopefully clearly written) on our wiki, future teams that are pursuing projects in similar areas can speed up their own research process and benefit from my work!