He disturbs birthday celebrations with his faux-bigshot-celebrity schtick

He makes this noise when he plays a record "Woooooah, lets get fucked up tonight"

He calls all ladies "Babygirl"

He left the stage after twenty minutes of his set. This is because he is an old man who needs ample rest. 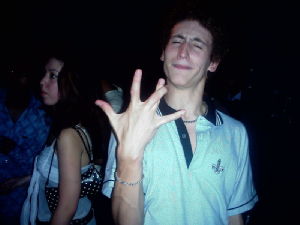 This professional and concise review brought to you by Jumpin Jack Howson and Crown Jules Maynard (currently missing, presumed exhausted from WESTWOOD lovin')

41 comments by 1 or more people