Good, But not finished

Writing about No Purple, but lots of Greeks…..TOGA!!! from ..Speed of Brain to Mouth : Minimal..

This evaluation and analysis is good and well-rounded in the points that it addresses ; Richard and Kate (do we see a future couple?) have approached the qurstions on Ancient Greek Theatre depiction with rigour and Richard especially gave a good narrative on how the Phalyx stage can be suitable for both Comedy and Tragedy. Despite Richards good points I would still disagree that the phaylyx is an apporpriate performing space for Tragedy ; it is not of a size or significance to accomadate a chorus. Moreover tragedy is a genre that uses magnificent gestures, large masks and explicit and overt acting techniques ; Just as in some art you loose its message when to close-up the same can be said to be true with performing tragedy!

I would stage the voting scene with the furies to stage-left of the central skene doors and orestes stage right ; Athena would stand central to the skene doors and the judges would sit in the orchestra.
When each persona makes their case they come to the front of the stage. The final hymn could involve everyone filling down to the orchestra and slowly orbiting it befroe exiting.

"If someone beside you sobbed or shuddered or trembled, you would feel it directly, and a wave of physical reaction could pass like an electric shock through all your neighbours . . mass emotionalism flourishes in compact crowds of that kind."Greek Tragedy and the Emotions, W.B. Stanford .

The relationship betwwn the Athenian spectator and performer evolved as the Thetare Dionysos became more prestigious, more grand quickly becoming only second to the olympics. The whole of Athens became united, and the performance provoke fever pitch excitement coupled with patrioarchy and nationalism.

iv. Might different parts of the theatre have demanded different styles of performance? When one was in the centre of either the orchestra or infornt of the Skene doors they would be required to perform at a higher level, with the greatest chanelling of emotion. However when perfroming as stage right, stage left the perfomance could be toned down a little – still with might projection and stron movement but with a more human side.

ii.How might different spatial relationships have affected the meaning of the scene, or the characterisation and status of the characters and chorus

In the binding scene if the chorus had been situated infornt of the main doors of the skene then the spectator would have dound it harder to draw comparison with what was happening on stage and what was happeing in their lives . However with the scene in the orchestra the spectator would have had a much more personal experience . Moreover the furies are very earth raw creatures and thus in the orchestra this would have been represented . Furthuremore with Orestes in the middle of them we would see a symbolisation of how in his in the furies midst due to his blood-kin murder of his mother. 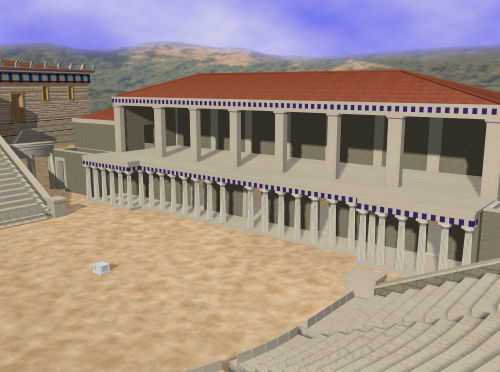 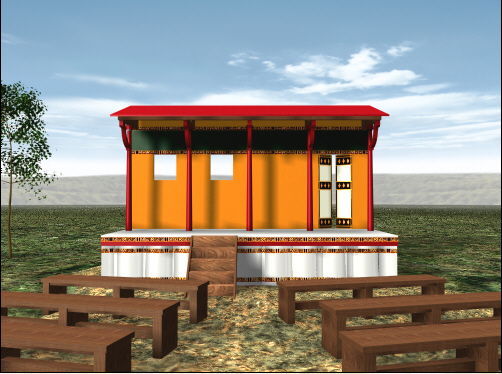 On the same stage the chorus ( the furies) could have filled alot of the front of the stage, swamping the enire space tor represent their constand presence on earth . However it would not be right for them to enter the skene whcih would have been the temple of Apollo and thus beyond there power.

1 i) If you look at the ancient vase paintings you eill see subtle evidence that shows the vases depict the greek myth as opposed to the myth-influence play. 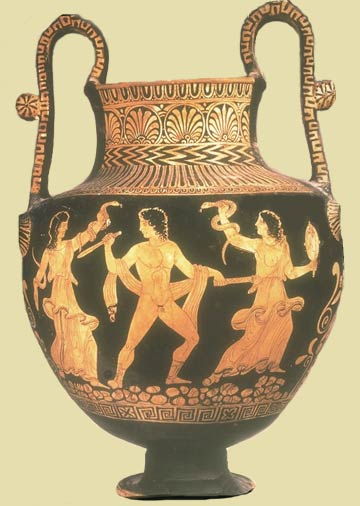 In this vase painting you will see woman ; woman would not have been part of the male orientated Thetare Dionysos in ancient greece. Moreover the nakedness and the depiction of snakes would not be conducive to an ancient greek play.

Hester Bond – A very nice evaluation, with a good range of material ; however she can't fool us ; three wapping great pictures made it look like alot work when actual it was a pitifule excuse for degree level standard !