We believe that the creative inhabitation of cities can be fostered by simple and creative initiatives. This can sound simple, but it becomes complicated when the approaches at the very base of the conception of city differ.

A first approach to fostering creativity and modernity in a city is by the management through state initiatives and investments (Post on the development soon to come- Link will be posted here).

The Jacana Projects vision is not fighting this conception, but we believe that these top down approaches should be combined with a bottom up focus : We are the fervent defenders of a city made FOR the PEOPLE, BY the PEOPLE and FROM the PEOPLE !!
At the base of this conception lies the idea of space. Because space is something you create, something being define by its owners, its users, its infrastructures and its purposes. We see city spaces as canvas on which are written histories and social experiences. Our inhabitation of space defines and makes it a creative space.
On this subject we are following the conception of the placemakers , as they call themselves, who developped the 'pioneering Placemaking approach' which 'helps citizens transform their public spaces into vital places that highlight local assets, spur rejuvenation and serve common needs.'

Cities are a succession of spaces overlapping with each other, a space is multidimensional physically and temporaly. Good examples of ephemeral transformations of public spaces often take the form of now famous Guerilla initiatives.

Some of the most engaging and simple are the Play Me I Am Yours worlwide exhibition of pianos in city centre that people can play, or the worlwide movement of Guerilla Gardening !! 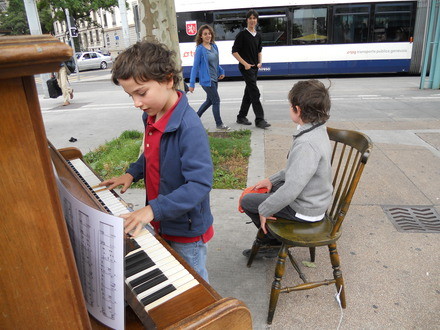 Jouez, Je suis a vous! Play Me I Am Yours ! Geneva, Summer 2011
...initiatives that can engage and encourage people to make their city finally theirs !