A Reason To Start Doing Something 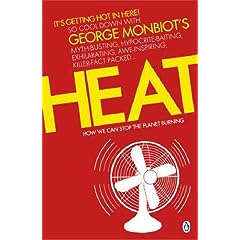 Title:
Heat: How We Can Stop The Planet Burning
Rating:
Not rated

The blurb on the new paperback edition of George Monbiot’s Heat trumpets its author as the “scourge of big business, riler of governments, arch-enemy of climate change deniers everywhere”. When he held a live question-and-answer session on Guardian Unlimited on Tuesday, I asked him if it was his idea to promote himself in this way. He replied that it wasn’t, but that he had acquiesced to Penguin, who ‘know far more about selling books’ than he does.

You have to wonder if they’d even read the book in the first place.

The problem is that big business, governments, climate change deniers – the ‘lying industry’, as they are branded elsewhere on the cover – are quite happy to be scourged, riled and baited – so long as they don’t have to change anything. Monbiot’s book seeks, rather, to engage. Working from the basis that the world must achieve a 60% overall cut in greenhouse emissions (a 90% cut in developed nations like the UK) to prevent the two-degree temperature rise that will accelerate global warming beyond human control, he pitches practical, reasonable, well-researched solutions: a vision for a modern, ecologically-viable world as a political and economic reality.

This is his real achievement. If the problem of tackling climate change resembles untying a large tangle of twisted knots, Monbiot resists the temptation to struggle or force it. If he were the elected leader of a developed nation, he’d probably find the largest possible pair of scissors and cut it through. Instead he sets to the task with patience and diligence, following the various threads as honestly as he can.

This means subjecting his fellow environmentalists to the same scrutiny as the multinational corporations, the developers of ‘green solutions’ like biofuels, wind turbines and solar panels the same as Virgin, Toyota and Shell. His fifty pages of notes rely mainly on references to government studies and peer-reviewed academic journals. He is not satisfied with the word of anybody with any kind of investment.

And as he discovers, climate change is a very knotty problem indeed, made up of troubling paradoxes. For example: that the people most responsible for causing climate change are the ones who will suffer least from its effects, and suffer most from the changes required to prevent it. He concludes in a wonderfully meditative epilogue: “it is a campaign not just against other people, but against ourselves.” In spite of this, he is resolute in his belief that the costs of failing to act on climate change – economic, social, political – will be far worse than the costs of doing so.

The other inconvenient truth that Monbiot uncovers is this: that the newer, more efficient technologies championed by many as the key to beating climate change can by themselves do little to achieve the required cut. The progression of science and the development of technology is matched step-for-step by the demand for energy. This is why the number of journeys taken by bus and train in Britain can have increased alongside the number of journeys taken by car in the last ten years; this is why the average American car does fewer miles-to-the-gallon now than the original mass-produced automobile, the early-20th-century Ford Model T.

The fundamental feature of Monbiot’s programme, then, is an unavoidable ‘carbon cap’. The right to produce carbon is rationed, with individuals using their carbon ration to pay for what they use in heating, electricity and travel mileage: the rest of the country’s allotment (Monbiot splits it about 40-60) is divided by the government between corporations, who cover the carbon cost of goods etc for those who buy. Unused rations can be sold to those who require bigger cars and more electricity.

In the rest of the book, Monbiot explores the most viable solutions for providing energy, housing, transportation and shopping in accordance with his 90% cut. The problem, I suspect, is not that people themselves would have trouble accepting the restrictions if they were universally imposed. What hardship is it really if our fridges, TVs and cars no longer guzzle energy needlessly, if our houses no longer bleed heat into the street and money from our pockets, or if our supermarkets are forced to provide us with good quality seasonal food? The problem is that the lobbyists for oil, energy et al will block the changes before we even have chance.

And indeed, certain of Monbiot’s proposals I cannot see ever happening. A system of regular, direct, deluxe coaches to take the place of motorway traffic? An almost total reduction in airline travel, for which the technology capable of reducing its vast greenhouse emissions remains entirely potential? Still, there is no excuse for the powers that be to procrastinate over even the easy (or profitable!) solutions; less still for committing billions of pounds to building new airports and motorway lanes.

Ultimately, though, Monbiot’s message is that we cannot give ourselves up to the problem of climate change before we even attempt to solve it. This is something we can do. Together: personally I find it quite an uplifting prospect in that sense. Where we don’t yet have the answers we have to give ourselves every chance while we attempt to figure them out. At the close of the book he makes a direct appeal to the reader to take action, to make changes, to stop waiting for somebody else to act first. In that respect it may be the most important book that you ever read.