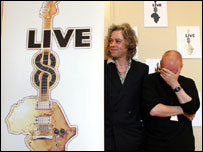 Following on from yesterdays comment about Live8 tickets, eBay have given into the pressure from customers and organisers to ban their resale.

The internet auctioneer Ebay was forced to withdraw tickets for the Live 8 charity concert from its website last night after Bob Geldof demanded a boycott over its refusal to prevent touts selling tickets.
The company's climbdown came after hundreds of protesters made bogus bids on the site of up to £10 million in protest at sellers attempting to make a profit.

Geldof, the organiser of Live 8, threatened legal action against the website – which he likened to an "electronic pimp" – and accused those people selling their tickets of "disgusting greed".

Its not clear why those who sell tickets on are being criticised, whilst those who choose to enjoy music that would otherwise cost an exorbitant amount are heralded as being more altruistic. The value inherent in the ticket lies in the quality of bands on offer. By going down and enjoying the concert, one benefits from that value in-kind. Through the ticket's sale, the seller obtains its monetary equivalent. To the extent that there are willing buyers and resale is permitted by law, the person selling the ticket on eBay is no better off than the person who decided to listen to the music.

eBay probably made the right business decision, but its initial statement on the issue was correct

"We are allowing the tickets because we live in a free market where people can make up their own minds about what they would like to buy and sell. Ebay believes it is a fundamental right for someone to be able to sell something that is theirs, whether they paid for it or won it in a competition."