I've had a great year on exchange at Warwick – peace!

Last night at the Union (dumdumdum)...ruckus at the bus stop!!!

Had a great time – and didn't even mind paying 5 pounds to get into the party (so I must have been a little hammered, come to think of it)...by 1 or so the DJ was in form, there were some dancers on stage, and everyone was having fun in the Marketplace. Exited (slowly and unevenly) at around 2:10, felt some nice night air and then looked for my friends.

But it all went down the toilet outside…

(Short version) while waiting on the pavement near the bus stop in front of the Union, some of my friends were almost run over (???!!!) by a car that had jumped the curb, and then there was a completely unprovoked ruckus started by the driver and passengers. They were throwing beer bottles, punches, etc…

End Result: one buddy of mine, a really cool guy, never a source of problems for anyone, has to return to his home country to have his face repaired and all of us are a little pissed off and disappointed.

UPDATE: He has had his operation, and now has four titanium screws permanently installed in his face.

The question, I guess, is why can't all of us have fun without someone getting their face mashed up? Its crazy…if only everyone could fight the way we do at home.

Here is a re-enactment of the fight as it would have happened on the streets of Toronto:

Final notes: a big (sarcastic) thanks to the security guy who told the people in the car to 'F&%& off!' and leave, rather than trying to keep them there until the police arrived. Also, thanks for telling my friend "Shut the f&%& up!' when he told you not to let them go.

But the police were professional and helpful – and maybe these guys will get theirs, as someone got the plate number of their car (or so I heard, it was sort of confused).

I guess its a measure of how upset I am about the whole situation that I've written an entry in my Blog…I think this is the third entry since I came to England in September. All joking aside, I am angry and disappointed both with the drunken idiots who attacked my friends and Warwick security for their negligent attitude towards the incident.

My year at Warwick

Will be expressed in photos here on this site. Feel free to e-mail me more photos to put up, if I know you or if the photos are interesting – this goes double for those of you back in TO. I need some more Canada pics, because I just forgot to take any before I left.

I'm having a great time here, couldn't be happier (well, not much more). This is where I live. 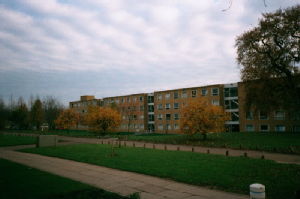 I've put up a bunch of pics of places I've been in the UK and in Europe. And some of the outdoors at home – Algonquin and the Rockies, mostly. There are lots of photos of my friends here at Warwick; most are international students like me, from France, Italy, Spain, Germany, Poland, etc. But I live with a whole bunch of English.