All entries for August 2007 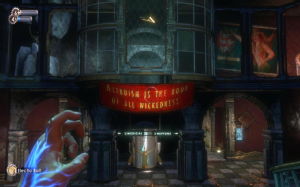 Like many other users today and for the last couple of days in the US, I had a problem playing Bioshock (preloaded by Steam). I'd launch the .exe file to be faced with a black screen and then have to force close it. After ploughing through some internet sites, I found a solution that works for me.

If you're using Steam:


There are quite a few potential explanations for the problem, mostly centring around sloppy coding when it came to Vista and handling the Visual C++ or Direct X 10 stuff. The solution above lets you use Direct X 9 and it seemed to work for me. I'm going to try reinstalling Direct X 10 a bit later on. Other users seem to have had some success on Vista with rightclicking on the bioshock shortcut file and running as an Administrator. It's also worth a try.

It's a great game once you can start playing it. Click on the picture above to enlarge the thumbnail.

2007 has been a great year for enjoyable movies and unexpected treats. Die Hard 4.0 was a lot better than expected as was The Simpsons Movie which proved to be far more than a desperate cash-in after years of bad scripting, lazy voice-acting and declining ratings. Michael Bay managed to avoid stumbling over his cliches with The Transformers and Spiderman 3 was a much better trilogy conclusion than X-Men 3. To top it all off, we can still look forward to The Bourne Ultimatum and Disturbia. Good times, good times.

But what of Rush Hour 3? Well the Rush Hour series was never brilliant but the first two movies were good comedy fun. They were the only decent English Jackie Chan films - Tuxedo anyone? How about Shanghai Noon? Bleh. - and, of course, they featured Chris Tucker. It's a great shame that he has decided not to do more movies, apparently preferring stand-up comedy to acting. Then again, from the plethora of outtakes we can see that he's not exactly one for getting lines spot-on first-time around. It must be painful repeating the same gag ad infinitum.

Is Rush Hour 3 as enjoyable as its two predecessors? No. It's not nearly as good a film as Rush Hour 2 nor is it as good as the first. The plot is terrible, as is the acting in parts. I can almost feel Jackie Chan's embarrassment at having to take at least some of the film seriously. There are quite a few tired gags squeezed for all they're worth and it's quite clear that much of the funnier stuff was toned down to get a money-making rating. Without Chris Tucker and a few well-scripted turns, it would just about make a passable straight-to-dvd release. If you can't spot the baddie in the first few minutes you'll have to reconsider whether a degree is the best thing for you.

Jackie Chan is clearly aging. You'll recognise all of the old chair-rolling, table-flipping kung fu comedy and feel that it's no longer as good as it once was and Jackie agrees. The schtick's certainly not as good as it was in his Hong Kong heydays. Chris Tucker's getting on a bit too. You can't call him fat, but he's definitely a lot rounder in the face. And, somehow, it makes him seem less funny.

If you're desperate to watch something in the cinema after all of the Summer's great films, then you might enjoy this if you were a fan of the other two. It's probably best to wait 'til it crops up on terrestrial TV and spend your money buying Rush Hour 2 on the internet instead.

As much as I like Tucker & Chan, here's what they had to say in a promotional interview:

CHRIS: The script had to really work, and I wanted it to be believable.

Q: Is it true you hate doing "Rush Hour" films?

JACKIE: Not hate.  I hate the American system.  I didn't understand how Americans do films or why they like films: dialogue five days, action one day.  But after the first one did so well, I decided to make "Rush Hour 2" for the money and "Rush Hour 3" was for the audience.

.Jackie Chan: I just do the basic, basic things with the things around me, table, chair, same thing actually. Nothing really special. I think the audience right now just sees, "Wow, Jackie still can do something, eh?" Not like the old days, "Wow, look at the amazing stunts. Amazing movements. So quick!" Now they say, "Wow, Jackie still can move." It’s a different thought.