I was sitting in Starbucks the other day in Jianwai dajie, when a horde of loud-but-friendly American 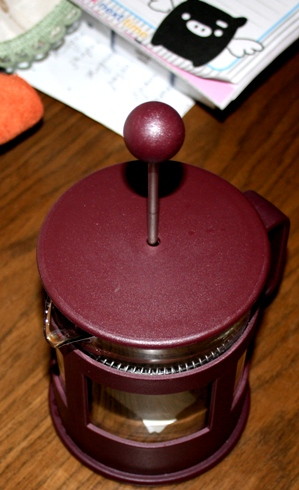 tourists entered (mostly some very nice and retired old Jewish ladies from Miami and some much younger and quieter but just as friendly southern African-Americans). The staff were having some problems communicating effectively with a couple of the old girls who were looking at the various mugs, beakers and other trinkets. So while I was up getting some tissues, one of the waiters asked for my help in translating 半价 (half-price).

So I very helpfully pointed at the sign which said both 半价 and 50% off in English and told the waiter that the sign had the English translation and then told the ladies what the waiter was trying to say. After the had finished pointing and asking whether certain items were included in the offer, I thought I might as well pick up a half-priced teapot. At about GBP4.50, it was expensive by Chinese standards but it looked nice, simple and sturdy and so I picked it up at a whim.

Now I can make tea effortlessly and with little cleanup. I never really used to drink tea when I was younger, save the odd cup loaded with milk and sugar and, of course, a rich tea biscuit with half of it ending up at the bottom of the cup.  Having given up Diet Coke for a certain someone special, I drifted more and more towards tea and I find myself enjoying it without sugar, without milk, just black and strong, brewed from Earl Grey leaves. Delicious.

I'm going to start sampling more Chinese teas now that my taste is a bit more open to different flavours. I've always been a fan of 乌龙茶 and 龙井茶 but now I want to move on to some of the different flavours and mixtures.