Music Piracy – Try Before You Buy?

So as the Pirate Bay crew get sent to Swedish jail for the crime of allowing people to see links to pirated material (let’s not forget, they hosted none of the films or music in question), a report from Norway suggests that illegal downloaders, the pirates of the internet, are buying more music legally online than anyone else. Hang on. Surely not? The record industry has told us these people are destroying music and all those associated with it, committing crimes as bad as those of the Somali ocean pirates.*

Except apparently they’re actually contributing more to the record industry’s desired download sales than anyone else.

Polemic against the outdated and outmoded exploitation industry which is the major labels (where artists can earn pennies for each £10 CD sold and many survive on tour and merch money only) is easy and oft repeated, so it seems surprising that this Norwegian investigation seems one of only a few attempts to look at the people the big labels demonise as pirates.

A lot of what is pirated is leaks, mp3s of albums which haven’t been released yet. That many pirates go on to buy lots of music is no surprise in this context, it is often mere impatience which means they have gone to the leaks in the first place. People want to hear things from bands they love as soon as possible. Hence why the big labels release singles, do promo, release tracks to the clubs and radio. Leaking will lead in some cases to the record not being bought but it will often not stop sales to people who want higher quality digital media or, more interestingly, the actual physical release. Those of us who value a CD with artwork over a bunch of mp3s, are still numerous if not overwhelming, as if we ever were.

If anything what this report has done is reinforce one of my biggest suspicions about record label opposition – filler.

If you want a pair of shoes or a top, you don’t just take a glance at said clothing item and buy it. You try it on. Rotate gently in a booth with a mirror. Ask 36 friends, passersby and shop assistants if it looks good on you. Then you admit defeat and get the size 14 because the size 12 was only going to fit in your dreams (or you could not shop at Top Shop where all clothes are designed for twigs).

That a lot of pirates are buying music suggests, strongly, that they are prone to trying before they buy with their music as they do with their clothes.** And they might not like what they hear enough to buy it all. I can listen a good two dozen albums I own which I wouldn’t have bought had I heard them beforehand. That’s at least £200 wasted, when iTunes could have furnished me with the songs I actually liked from them for less than a quarter of that.

This means the record labels are afraid of their one hit wonders being found out. The profit to be creamed from albums thus is reduced. And record labels do not like this, which I have long suspected forms part of their problem with pirates. Official free downloads are increasingly common but still not a majority practise. That they soon might be says it all.

If the record industry was more interested in long term rewards than short term hype then the pirate problem would have been better investigated and accommodated (limited life, pre-release downloads which expire on the day of release would satisfy many) but the focus remains on so much short term crap, hence the wringing dry of reality TV’s singing contest pool.

The only people who will be surprised that pirates buy more too will be those duped by the big labels via the media into thinking all music downloading is a case of black-and-white theft. If only it were so simple.

*Which rather bring up the somewhat pleasing mental image of a handful of geeky music downloading nerds holding Bono hostage on a life raft in the Indian Ocean with a warship in hot pursuit.

**You might argue that internet shopping is reducing instances of trying on, especially amongst net savvy pirates, but you can send back ill fitting internet clothes, so it’s the same process only with p&p.

Why has no else spotted this?

I am not hallucinating, there are serious similarities going on there! And neither sound anything like ‘Courtship Dating’ by Crystal Castles. Sad face.

I’ve been pretty geeky recently and I am just wondering about the correct path – do I go more geeky and achieve geek nirvana or give it up and stop asking questions no one has asked before because most normal people have real concerns to occupy them? Decisions…

One thing to come out of Rome last week which has baffled (apart from the way the British fans and Italian managed not to kick the shit out of each other for once) is Roma player David Pizarro’s reaction to Cristiano Ronaldo’s mild halfway line fancy footwork. Calling it spiteful and disrespectful the Chilean argued that it was the wrong thing for Ronaldo to do. Sorry, did I say argued, I meant whined.

Pizarro’s complaining might gain sympathy from some, those who argue that it is disrespectful to fellow professionals to do such a thing, and this tacitly (in my opinion) endorses the sort of heavy handed response which leaves people like Eduardo with broken legs. I’m not saying Martin Taylor meant to smash the Croazilian, but I certainly think his unsubtle approach was formed by the same line of thought. A little heavy handedness to remind the skilful ones you’re about. I’ve done it myself, as a keeper I’ve occasionally been known to not pull out of runs once the ball has been collected purely because to do so would avoid bumping an opponent I want to unnerve a little. It’s not always malicious, it’s just something that’s done. The really good player is the one who ignores this and still shows off their fancy skills, and if a player does that to me I don’t mind any fancy skills, they’ve earnt the right to demonstrate (though I still won’t let them score where possible).

Pizarro’s whining smacks of immaturity. The response to being outsmarted should not be to complain about having been outsmarted. It’s a team game. Sure, one player’s fancy feet might have left you feeling stupid, but no team on earth, not even Brazil 1970 was made up of eleven men doing funky tricks and juggling – Félix was just another goalkeeper. Roma have already proven a couple of times recently that they can solve the problem of Ronaldo by simply stifling him. So have Portsmouth, Manchester City and most of the other teams who have beaten Manchester United in the last year or so. Just because Pizarro himself isn’t good enough to stop Ronaldo showboating doesn’t mean the Portugese shouldn’t, it means Roma should have tried harder as a team. Anderson didn’t play amazingly, and Carrick shows no exceptional skill in getting away from players marking him (although he has the most exquisite passing ability).

The 7-1 thrashing Utd dealt Roma last year also elicited complaints that they had done it to humiliate their opponents. Find me one person, who’s not a Roma fan and a rabid ABU, who didn’t watch that game in amazement. The best argument for that was that Utd know no other way – we cannot play defensive football like Chelsea or Liverpool, we only know how to attack, and on that day Roma forgot to defend. Completely. But how much happier did it make neutrals than watching Utd sit on the ball safe at 4-0 for an entire half (yes, 4-0 at half time)? Roma could and should have played better, they won the first leg 2-1! After the 4-0 spanking in the FA Cup this year, Arsenal came up with similar gripes about Nani’s showboating and the scoreline, but this is the same Arsenal who drew 1-1 in the previous league game and should have played better.

If a team is showboating it’s skill being used for the sake of it. No one complains about skill when it’s needed to help a team. Ronaldo’s outrageously fancy goal against Villa last weekend drew no complaints from Villa as it was the first goal, Utd needed anything they could to take the lead at that stage. So why do people complain when it’s not necessary? Threatened? Insulted? Humiliated? It’s not the cloggers who get remembered, fans want these fancy skills an these players would not complain if their team were the one demonstrating them.

South Americans apparently regard excessive tricks as the worst thing a player can do (like the English view diving*) and yet they are so much better at these skills than we are. And yet the 1970 Brazil team are remembered as one of the best of all time.

As several people have said, if we have to pay £50 for a ticket to a top flight game, we want to see top flight skills. And if the other teams don’t like it then they’d best up their games too. Citeh have proven it can be done – their double over Utd is the only thing their season will be remembered for. The reward for taming skill is more interest than that for merely being consistent (Blackburn, Villa, Portsmouth…).

*By foreigners. No one moans when Michael Owen or Wayne Rooney does it.

So Long And Thanks For All The Cups 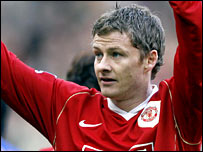 Ole Gunnar Solskjaer, one of the few modern footballers about which it’s really rather tricky to find faults, is retiring. A couple of comments on the BBC 606 website have grumbled about this leaving Manchester United with even fewer strikers, but we all know in our heart of hearts that he’s not been able to take the strain for at least three or four years.

Even so, it’s a big psychological loss. The man is commonly regarded by real Man Utd fans as one of the genuine greats. Whilst he never had a secure first team place he still managed to score goals of quality, quantity and necessity. He’s managed to be remembered and loved despite having, at various times, to compete for a spot with Eric Cantona, Ruud van Nistlerooy, Andy Cole, Dwight York, Louis Saha, Teddy Sheringham.

Even my mum, a diehard Liverpool fan (so diehard she won’t read this tonight as she off to see them play Toulouse) likes Ole, along with Giggs, the only Man Utd player of the 1990s and 2000s she’s said she genuinely likes rather than merely admires (and moans about when they beat Liverpool).

Never complaining about being on the bench, never wanting a big money move when he was such a valued component in a team. Considering the silly money paid for players today, what chance of another £1.5m wonder?