All 3 entries tagged The Bass-Ics

What can I say; playing an instrument for its own sake. Not in a band, or with the intention of joining a band. Not for any other reason than it's so bloody relaxing. And there's something intriguing about seeing your own instrument bedecked shadow flitting across the wall. It's like you're doing something, when in fact you're doing nothing, escaping the mounting pile of work (academic and paid), washing up and general all-encompassing life. Here lie no decisions likely to impact on anything other than the next five minutes.

So here, for no reason other than to celebrate their calming influence, are ten songs which I need only to play along to in order to feel better.

Bass playing and the Art of Looking Cool II

Some of you know what the above writing is about. The rest of you either want to know or would rather I went back to complaining about the trains the whole time (that may well happen so careful what you wish for).

What that random writing is is a bass guitar tab, music written for guitar users. Now, I can read music but I never read it on a conventional stave for guitar because this form, tabbing, is so much easier. Basically each line corresponds to a string on the guitar, usually lowest string at the bottom, although they are often labelled, and the number is the fret that's held down and played.

And that's it really, nice and obvious. Any tab website, like my personal favourite mxtabs.net, could tell you as such.

But they don't really tell you how to get started. They are a library but it's often about learning to use the library (as a history student this similie makes perfect sense to me) and that's what I found a bit tricky.

You are not going to be able to play the Red Hot Chili Peppers after only 5 minutes.

Start with the easy stuff that you know and like. It's much more rewarding to play along to songs that you enjoy listening to and playing along to. In my case I discovered that my favourite band, the Manic Street Preachers, are prone to quite simple basslines which can be easily played. As a result I was able to start playing quite easily.

The trick is to try something a bit different to what you already know and learn what you like to play. I can play Red Hot Chilli Peppers' songs, albeit after much practise, but I don't really like to (except Otherside and Californication) because I find them a little over the top and self indulgent. They're also so rigid, there's not much room to improvise as Flea fills all his basslines with little bits and pieces of his own. I like to be able to play something a little differently to what it is on record, it makes it more fun.

I like to play along to bands like Elastica, Interpol and Muse, all interesting basslines from bands I like. But, as any half decent music teacher will tell you (ad infinitum) practise practise practise. Annoy your housemates or buy headphones or play quietly in your room or do what I do and play in the kitchen when no one else is at home.

Or call me and I'll give you lessons for a wonderfully extortionate fee.

Thank you and goodnight.

(PS There is a prize of a cupcake to anyone who can identify the bassline at the top of this piece. Clue: It's in 6/8 time).

Bass playing and the Art of Looking Cool (with 4 strings) 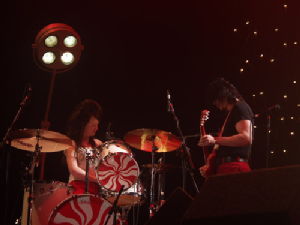 Poor old White Stripes. They have a mega million selling album or two, a headline slot at Leeds/Reading in front of 80,000 people and they are the critics' darlings. But the poor dears still haven't yet found what they are looking for. Watch them as they run all over the stage in search of the missing component… a bassist.

Ok, so maybe the White Stripes don't really need a bassist but a lot of bands do and if there's one thing I've always found where ever I've gone its that there aren't enough 4 (or 5 if you like nu-metal) string heros around.

Now this series of articles (if I can be pretentious enough to use the phrase) is about bass playing and has come about because recently via this website I was asked about bass playing, how to get one, what to do etc etc. I'm not claiming to be huge expert but after 5 years of playing bass I think I can be helpful to those who want to start.

You want to play bass. Why?

Well there are a lot of reasons, some people try guitar and find it too hard. I'm not going to lie when I say that it is a lot easier to learn to play bass to an average standard than it is with guitar. I'm not a great guitarist (and ironically bass playing has improved my 6-string abilities) and this did influence my decision to play bass a little bit. But I liked the sound they made, the low frequencies. A good concert can be made so much better by a bassline you can feel as well as hear, or even one you can feel but can't hear.

A bass is a fairly expensive setup. For a start unlike with guitars you are going to need to go electric striaght away and that means buying an amp as well as the bass itself. There are acoustic basses but they do tend to be quite expensive and only bigger guitar shops tend to have more than one. 5 years ago I spent £180 on a second hand bass and a new amp. Some guitar shops are nice, the one I went to, the legendry Johnny Roadhouse in Manchester, threw in a load of free goddies with the bass and amp, a lead, a strap, a bag and plectrums (all of which I lost within minutes, plectrums can become a running cost). Not all shops will do this but some do.

I started out with a Squire P-bass, they are quite cheap as they are copies of Fenders but Fenders are a really good make so even their copies are good. Even though a slight problem with the electronics developed after about 2 1/2 years (it buzzes slightly when I turn the treble up), it's still a damn good guitar. As a beginner's tool they are great.

But don't just assume what suited me will suit you. Decide how much you are willing to spend and go to a big guitar shop. There test out whatever falls into your price range. Try before you buy. And I mean give it a good 5 minutes or so because some basses can be a lot lighter than others, some have thicker necks than others. Although I am a girl I'm quite big (ie I'm 5' 10", not big as in full figured) so the, admittedly somewhat heavy bodied and thick necked, P-bass didn't bother me too much although it may not suit everyone. Most guitar shops won't mind if you try stuff out as long as you don't play Twinkle Twinkle Little Star on it.

A good guitar shop should be able to tell you the best sort of amp to get. Bass specific amps will cope better than general guitar amps though. Then it's an ieasy matter of getting all the wonderful essential extras:
Lead: Very important, mine is currently broken and I have 'borrowed' my brother's.
Guitar bag: For getting from A to B. Or C.
Plectrums: Some bassists don't use them, some do. Get a couple anyway, try them out and even if you don't like them you must have at least one in your pocket at all times to be considered a musician. That is the law and is true and stuff.

There are other items, plectrum holders, spare strings etc, that can be bought but there's no need for the beginner to bother straight away. Go home and admire your new friend.

Next time: Starting to play. What do I do? Where do I start? How long before I can play the Red Hot Chilli Peppers entire back catalogue?