All entries for September 2009

Follow-up to City vs Blackburn from Hollyzone

So with reports that Emmanuel Adebayor’s imminent and inevitable ban for his behaviour at the weekend will be fast-tracked so it starts with the Manchester derby I can’t help but join every last City fan I know in shaking my head and wondering how the club I mocked not so long ago for being able to field an entire team of strikers has managed to concoct a striking crisis just in time for the trip to Old Trafford.

Emmanuel Adebayor – £25m – possibly banned for being a silly billy.

Carlos Tevez – £25m officially, £47m according to rumours – injured whilst trying to make Diego Maradona look like a competent manager.

Robinho – £32.5m – injured somehow, although seeing as Old Trafford is an away game (heck, not even in Manchester if you listen to pedantic Citeh fans) he probably wouldn’t have made an impact even if he did play.

Roque Santa Cruz – £18m – when I contended to a City fan that we (United) also had some injuries, she said I couldn’t count Hargreaves. By that logic, I said, she couldn’t count RSC, who does seem rather fragile (although admittedly not in Hargreaves league).

So that’ll be £100.5m spent on attacking talent, and it looks like it’ll be Craig Bellamy and Benjani playing.

The problem with gigs is that the artist isn't necessarily the master of their own fortunes, even as they stand up there in front of the audience and put on the show everyone's theoretically there to enjoy. A bad audience can cause even a good performance to fall curiously flat. This can often be the case when an artist rides a wave of hype or a big hit – audiences are dragged in on flimsier pretences than for many other gigs. Whether to be seen as the coolest kids, or to hear the one or two songs they actually know from the radio, crowds can be awkward and unmoved in the face of almost anything.

Reports of early Ladyhawke gigs suggested that this talented Kiwi wasn't the most outgoing onstage presence, partially down to shyness emanating from her Aspergers. But a long period of touring appears to have hardened and encouraged the woman known to her parents as Phillipa Brown.

In Manchester, in the upgraded Academy 2 (she was originally due to be crammed into everyone's favourite chapel of crap acoustics, the Bar Academy), she was engaging albeit in a determined and single minded way, bringing her songs to the audience from behind her fringe but with more stage banter than expected. A guitar malfunction prompted the sort of deadpan, Kiwi-accented commentary which might be more familiar to fans of those other popular New Zealanders, Flight of the Concords. “G's in tune... D's in tune... Sorry this is boring while I tune... A was very out of tune, sorry if anyone heard that... oh my god, E's so flat!”. It almost felt wrong to grin broadly as she declared the encore would begin with a cover of a song by “Petty Smath”.

It was a good cover too. Heck, all the songs, barring one, were well played, slightly heavier than the album, and delivered by a woman rightfully riding high on acclaim for them. Even if the superlative album opener 'Magic' fell slightly flat as the first song (its delicate, Depeche Mode-esque, electronic acoustics are presumably not the easiest to recreate, even without the Bar Academy's 'assistance'), the rest of the tracks were bashed out with suitable aplomb.

Yet the whole thing felt a bit flat. The audience just didn't seem to be engaging with the music, there was no rush of excitement for the surging album tracks like 'Professional Suicide’ (possibly one of the best tracks of the night) or the strutting ‘Manipulating Woman’. Even bone fide single ‘Dusk Till Dawn’ didn’t seem to be enough to rouse the crowd.

Having to wait for the hits of ‘Paris Is Burning’ and ‘My Delerium’ to spark the crowd was actually quite frustrating for those of us who have bothered to listen to the whole album. It had all the potential to be a brilliant gig and, ‘Magic’ apart, all the songs were rendered in a beautifully faithful way by Brown and co.

Brown has charm and tunes, she just needs fans who actually want to listen to more than just the singles. I hate to fall victim to indie snobbery tendencies, but perhaps it would have been better to leave this gig in the Bar Academy and not admit the singles-only fans…

It’s the Mercury Prize tonight. Can you feel the excitement? Really? In fact this year there don’t even seem to be quite as many rants from newspapers and zines about how there are bands who sell well, who have gotten some coverage in the media, although reliably there are some.

I suspect the reason why there are fewer rants is because the rants themselves are just as repetitive and unoriginal as they claim the award itself is. The grumble that it gives too many spots to the mainstream at the expense of supposedly more deserving ‘low profile’ acts, who normally turn out to be just as well known as about half the list but just happen to be the preferred record of whoever is grumbling. Thus is feeds back into the repeated claims that the Mercury has moved away from its supposed beginnings as a champion of indie success.

But as the media eye and public taste expands, mostly due to the internet, innovative and unusual stuff is becoming mainstream faster than before so the Mercury looks like it follows when it actually hasn’t changed that much in terms of what is nominated.

For Adès, Baptiste and Black Star Liner read Led Bib, The Sweet Billy Pilgrim and The Invisible, the real unknowns to the mainstream, although Adès was a pretty big name in classical, arguably bigger than any of the class of 09 are in their areas.

Then there’s Faithless, Underworld and Chemical Brothers. Three stonking albums of the current trendy music of 1999, dance. If anything they were bigger sellers than most of the 09 list, certainly bigger than 09’s trendy trio whether you wish to argue this is BFL, Florence and La Roux representing ladies in music, or The Horrors, Friendly Fires and Glasvegas representing NME indie.

TIMTTMY and Performance and Cocktails are more mainstream records than West Pauper…, and I suspect even 13 was also. 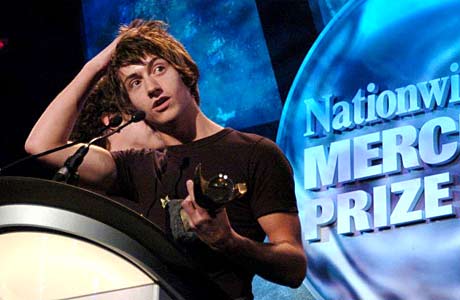 From guardian.co.uk – Arctic Monkeys are perplexed by previous nominees as we are.

What’s interesting is that many of the journalists and bloggers now commenting on the Mercury were quite young in 1990s, thus names like The Auteurs, PJ Harvey (‘93), Therapy? (‘94), Elastica (‘95), Asian Dub Foundation (‘98) might have seemed exciting and exotic to a teenager at the time, but they were actually pretty well known. Certain early years, like 1995 are startling for how mainstream they are, 1995 and 1996 in particular were packed with Britpop and associated acts.

The last overt mainstream pop act nominated was arguably Jamelia (although it could equally be argued she doesn’t fit this description) in 2004, but the 90s saw Robbie Williams, Take That, Spice Girls, U2 and Simply Red nominated. If anything the Mercuries are now more insular, there has not been a mention of Girls Aloud, for instance, never mind the reincarnated Take That. 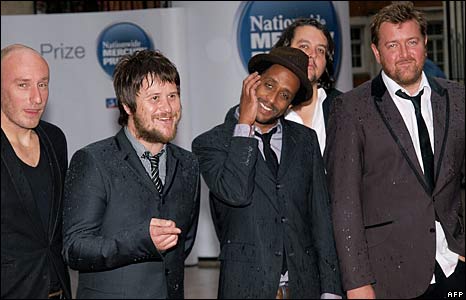 Let’s face it, when people say they believe the Mercury should be for low key but innovative music, or music which is regarded as brilliant in its genre but overlooked by the mainstream, what they actually mean is whichever indie band they were listening to last week. They would recoil in horror at the suggestion that it go to Darren Styles (http://open.spotify.com/track/7s923ZIFRdJEV0YzYPXMff) who perfectly represents the genre (Scouse House/Hard House) pinnacle who gets overlooked by the mainstream, or N Dubz who struggled against major label attempts to change them before going with an independent and realising their vision their way. Heck, where are Girls Aloud and the Sugababes who both shifted the pop spectrum?

Taking the Mercury too seriously is the same as taking the Brits too seriously, people need to accept their complaints with it come when people they don’t like are nominated, not necessarily because it has betrayed some original purpose.