From People To Bodies To Statistics

Edit (22.44 28/07/2006): After reading this article by Adam I want to make it clear that this entry refers purely to the Lebanon crisis and is not to be extrapolated globally.

Unlike one person I spoke to earlier this week, I've not failed to notice that there's a bloody war occuring in the Middle East. Bloggers on here have been debating the politics from pretty much every available angle, from feverent support for either Israel or Hezbollah, to the more considered critiques of the actions of both. But there's something which has bothered me the whole way through this. Something which bothers me about a lot of modern warfare – the people who die.

This is more than just humanitarian concern. War has developed over the last century or two to become less about who defeats who on the battlefield, to include elements of who can inflict greater casualties and destruction on the enemy. No country which has fought a war since 1900 is innocent. From reciprocal bombings on Dresden and Coventry by the national war machines of WWII, to the asymmetrical warfare in Ireland, Argentina, Rwanda, and scores of other countries, civilians suffer more and more in war these days. It's even a part of one of this university's History Dept core modules to look at this (see Week 12 ).

So Hezbollah and Israel rain down rockets on the civilians on both sides. Neither care for accuracy or consideration of targets – Hezbollah have killed Israeli Arabs, and Israel seems unconcerned that its victims inevitably include those who dislike Hezbollah. Yet the news in this country (and others) tries to be even handed but cannot be as this is now a matter of numbers.

Leaving aside who started this and who has the right to hit who, there is more coverage given to the suffering of the Lebanese. Some on the Israeli side see this as unfair, more signs of bias against Israel. They seem to fail to understand that numbers matter. The First World War was not much different from other European wars from history except in two ways – the minor noteworthiness of England and France being on the same side, and the much much more important fact that the death toll was massively higher than any other death toll in European wars. Since then only one war has surpassed WWI in terms of its icon nature – WWII in which even more people died.

It works on all levels. The 1993 World Trade Centre attacks get less coverage (and started fewer wars) than the 2001 attacks because in 1993 only six people died compared to 2,749 in 2001. The more people who die, the more the world's concentration focuses on those people.

So when hundreds of Lebanese are dying and Israeli deaths are yet to reach triple figures it is only natural that people's attention will be focused where the worst casualties are. The news reports that try to be fair (which, whether you like it or not, is led by the BBC) are showing Lebanese suffering first in its broadcasts and Israelis second. The footage the other day was indictative, Lebanese people in hospitals, crying over lost loved ones, covered in blood, followed by Israelis running for air raid shelters and talking about their fears whilst sat in normal, undamaged clothes. Those Israelis are living in terror every day, lives disrupted and people confused. But it's just not humanly possible to feel more upset for them than the bloodied and dead in Lebanon.

This isn't me saying I am biased towards the Lebanese. And yes, I accept that there's always the fact that we only see what the media wants to show us. There are bloodied and dead Israelis. But it's not on the same scale so the cameras aren't privy to it to the same degree, there isn't as much footage. And it doesn't matter who we 'should' be supporting once cold rational facts are considered, humans will feel sympathy for the victims and the Lebanese look more like victims at the moment, especially as everyone seems to think that this is Syria and/or Iran's doing that Hezbollah have been attacking Israel. The Lebanese are the perfect suffering innocents in the media eye.

In the end it doesn't matter who these people are or which side they are on. Civilians don't deserve to be what they have become – potential statistics in a scramble for worldwide sympathy. 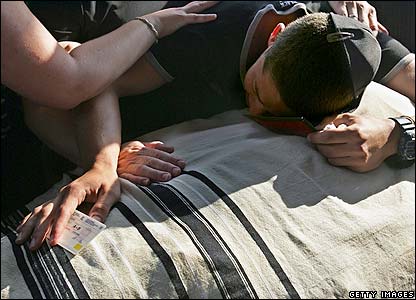 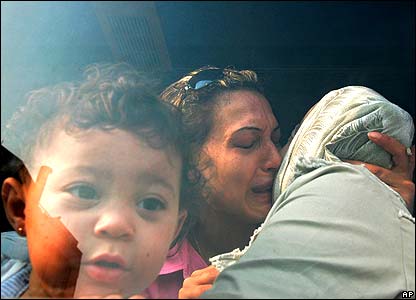 If you want attention then walk through Leamington Spa with a long bow on a Sunday night.

The arrows were safety arrows with suckers not deadly blades on the ends. As a result no one died when we decided to start shooting at the Sabbs' and their bollocks.

This is your advice for the day.

What Cotton Buds Say About Society

I never thought I'd faith hope in something which resembles a mini version of a weapon from long deceased but oh–so–wonderful TV event Gladiators, but it struck me the other day that the humble cotton bud says a lot about society which makes me hopeful.

Ok, that might rank as one of the more bizarre introductions I've blogged, but there's a nice logic at work. The above article contains a discussion I hear from time to time about nannying states and interfering companies and labels on packets of nuts which read "warning: contains nuts". Basically Chris's article sums up how in the old days we just made mistakes and learnt from them rather than get told how not to die all the time. Now days everything seems more sanitised, the world being wrapped, as he says, in cotton wool…

…except when it isn't.

Cotton buds are a curious thing. All packets of them say the same thing these days – "do not insert into your ear canal". At first this seems like more annying but think about it, what else can you use them for? There are really no other practical use for them. Some packets claim to be makeup blenders which is a bit pointless. Others claim no function at all, just the products existence. Here's the thing, the manufacturers know that the only reason people buy them is to put them in their ears. The warning is a sop, a complete cop–out and is ignored by everyone, and everyone knows this is the case.

Putting things in your ears isn't always a good idea, of course. I know someone who had to have his ear syringed after years of drying his ears by sticking the corner of his towel in them, compressing the wax. Cotton buds can be used badly, you know when you've done so as your ear hurts like hell. But most people do that once and never do it again.

Why should I care (apart from my brain being fried from an 11 hour day in 33C heat?)? Because I have slightly more faith in humanity than most nanny state types seem to think. Most people will use those damn things in a sensible manner as they are clearly meant to be used. And none of them will die. And sure, some people will end up needing syringing but they won't need it twice. We learn from our mistakes.

So it's not quite at the stage where we need lawyers and politicians to tell us how not to die. Which is nice. So next time your ear's a bit mucky think how great it is to be able to be a bit naughty and ignore the warning. Just don't stick it in too far, ok?

One for Moz and Daisy.

This is amusing. Click on the audio link here to hear come amusing cricket commentary with the commentators themselves coming under attack from the batsmen!

The answer you're looking for is yes.

If so go to á la discotheque, our shiny new mp3 blog which gives musical rants, lists, recommendations and esoterica accompanied by nice mp3s for you to sample and then use to buy nice shiny CDs. Yes, it's another way to lose you hard earned cash, but it'll be graet trust me.

Have you gone there yet? Why not? I'll shut up now and leave you with a picture of Jarvis Cocker and an instruction to go there. NOW!

Laughing At A Crying Man

How things change. Two years ago I defended Cristiano Ronaldo when he cried after Portugal got knocked out of the European Championship semi final. I felt it showed some passion which England players lacked at times. I also felt the loyalty that Manchester United supporters feel towards their players, a loyalty which results from the bombardment of snide remarks which any Man Utd player suffers in this country simply for being a Man Utd player (witness how underappreciated Gary Neville is).

So why did I smile at Ronaldo crying tonight? Not just smile, but feel that smiling was justifiable?

It's not necessarily a result of his behaviour in the quarter final against England… well, actually it sort of is. It's partly because when he arrived at Man Utd he was a little diving git and Ferguson tride so hard to get him to stop doing that, something I highly respect SAF for. But once more, in that quarter he was a'diving and a'cheating. Muppet.

Also did he really expect Man Utd fans to love him for his recent "I want to join Real" style comments? Our club heroes are loyal and talented, not self serving greedy gits. If he honestly thinks Real are more likely to yield trophies than Man Utd then he's taking a huge gamble.

This time around his tears seemed less like genuine emotion than the whining of a spoilt brat not getting his way. Perhaps it was like this two years ago but I didn't see it that way for above reasons. I don't care if he doesn't come back. I'd rather see a broken Ole Solskjaer on the right than that disloyal fool. Talent is nothing to us without commitment. Bobby Charlton was talented but he also came back from a plane crash. Ryan Giggs was stalked by Europe's best for years but stayed at Old Trafford. Eric Cantona retired rather than play for someone else. We've had players who make us proud. C Ronaldo is not one of them. 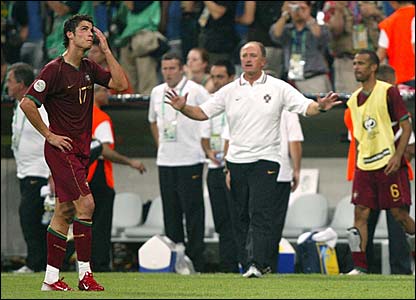 You lost. Deal with it. Now fuck off to Madrid.