This is me apparently.

I think I did actually say this…

What Is Going On With Cameron?

David Cameron you are messing with my head!

Under a Tory government, the public sector will become "the world leader in progressive employment practice".

"Well–being can't be measured by money or traded in markets."

Argh! This is not Tory talk, stop being so weird.

Ok, so Labour are now a bunch of Tories, the Tories are a bunch of hippies, the Liberal Democrats aren't entirely sure what they are, the Greens are but no one's listening, the BNP are being listened to and no one likes it, Ian Paisley doesn't like anything in general, Sinn Fein are trying to compromise, Plaid Cymru have compromised, the Scottish Nationalists won't compromise and John Prescott has been compromised and replaced with a stuffed badger called Reginald.

Follow-up to Remember To Vote FINLAND! from Hollyzone

Why oh why didn't I follow my gut and go to the bookies to put a tenner on Lordi to win? 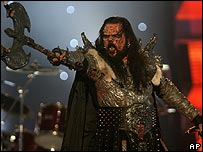 Partly my own fault for not leaving the house for most of the day because I was listening to too much Shakespear's Sister and reliving 1992. They were damn good I tell thee, just watch the video to 'I Don't Care' which is an ace song and a down right brilliant video to go with it. Siobhan Fahey might be one of my heroes now… Bring on the Wogan. After Birmingham Ladies FC got dumped by Birmingham FC, leaving them struggling for the cash just to get through the season, another club has ditched its women's football team. The surprise is that it is Fulham FC.

Fulham FC were once the perfect example for football. Mohammed Al Fayed decided to steal some thunder in the light of the FA's 2000 declaration that they wanted a professional top flight in women's football by 2003/4 season, and he declared that Fulham would be fully professional before then. And they were. For a few seasons they were fully paid players and as a result dominated the league, with all the best players flocking to Fulham. 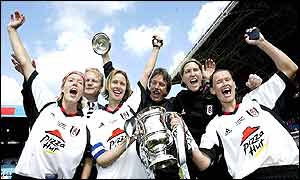 But it wasn't sustainable when cash problems started to hit even the men's game. So Fulham ladies returned to semi–pro status like everyone else (and lost most of their stars in the process) until now when they've been taken out of the league.

This is perhaps the most baffling thing. Whereas previously dumped teams like Leeds and Birmingham were allowed to fend for themselves in the league (Leeds receving a fair amount of help from their struggling male counterparts) Fulham have simply pulled their ladies team completely. The only recent precedent for this is Manchester United, but their women's team wasn't particularly successful, Fulham were top flight. Why weren't they allowed to fend for themselves in some way?

Anyway, the state of women's football is precarious and doesn't need Premiership clubs losing interest in their women's team at a time when women's football needs all the help it can get. What'll happen to Fulham's players and staff is uncertain but more than a few might find themselves no longer able to play at the level their skill deserves. Imagine Aston Villa men's going under and leaving all their players in limbo. The difference being that the annual wages of one Aston Villa player could probably fund Fulham ladies all year.

Saw this in the Guardian earlier.

The signs are clear. With figures like that we should all be investing in Clouded Yellow. Yes, it is sad to see homegrown companies like the Pearl–bordered Fritillary suffering with the economic downturn but this is a capitalist economy and figures of +1,877% are obvious indicators of where the butterfly market is heading these days.

Being pretty and highly amusing yet poetic to watch in flight has made the butterfly a highly desirable commodity these days and prices are fluctuating rapidly as we speak, such is the speed of fashion in the butterfly share community. Just read this testimony from Grant McGrantson, butterfly shareholder:

I started off with just a couple of shares in the Red Admiral but those went up and I was able to invest in more butterflies. Now I'm so rich I use five pound notes to light my solid gold gas cooker. Ha ha ha.

For those looking to start out investing in butterflies, remember to watch out for the poster in the Guardian later in the week as it lists all the top butterflies so you can decide which to put your money in. Remember a butterfly can flap its wings in Basingstoke and cause a typhoon in China so be careful to insure your butterflies so that if this does happen you're not left having to pay billions of pounds in compensation.

If we take that statement as true (and true it is so don't get postmodern on me and tell me it's only a discourse because you are talking shite and it's clearly true because I lose stuff a lot and with great ease) then we should probably accept the following process:

So people, just help me look and don't bother asking if I've looked because I know my weaknesses and your strengths.

Writing about And now from [TBA]

And the Irish World Cup Squad is…

Seen as every other blog in the universe has just exclusively announced the World Cup England squad I thought I'd announce 23 players who won't be travelling to Germany to cause Sven headaches this summer:

Poking The Local Elections With A Stick

Ok, we were all afraid a little yesterday weren't we? Afraid that the show of far right bravado which was the BNP's mass (all 300 or so of them, some mass) of candidates and their tub thumping talk of winning councils. And then what happened?

Especially in Dagenham and Barking, where they got quite a few seats (11 at current time), this looks quite bad. However it's worth noting that it's not as clear cut as that. For instance, look at this statistic.

The Greens have made more gains than the BNP with less publicity. And what's more it's for similar reasons to the BNP's success, disillusionment with Labour. Their biggest gains were in Norwich where the local MP is Charles Clarke. Now this is not to denigrate the Greens and their agenda (some of which I quite strongly agree with), but their successes do look to have an element of protest vote, just like the BNP's do. After all, the BNP overtly campaigned with slogans and manifestos which called for a reaction against the Labour government.

In this media orientated world they got the press, and the slightly bizarre comments from Margaret Hodge, which put them in the minds of people who then voted for them. However their objectionable status (which even a cursory read of their manifesto would reveal) would also have driven away many of those who were exposed to them through the media. Had the Greens had the same coverage, and not being flaming racists and facists this was never going to happen, they would probably have won even more seats.

These election show a protest against Labour and it's up to Labour to sort it out. I highly doubt a Tory election victory at the next general election would change too much of the policies which people are angry at (they won't fix the welfare state and there are laws and international declarations in place which mean they'll struggle to be as hard on immigrants as the hard rightists really want) so it looks to be down to Labour and it's difficult to see how Blair can change things, though a change of leadership might help.

In other more comforting news the Conservatives got a grand total a no seats (a time of writing) in Liverpool or Manchester which makes me feel happy, in a strange North West pride way. Heck, even my parents home town, right in the middle of Conservative Cheshire (no, we don't like having to live near so many NIMBYs and old school Tories), returned a Lib Dem as usual, with more of a majority than in the past.

So Labour got a bit skewered but not as badly as everyone thought, and we are not in the same boat as Weimar Germany, we merely want something more to be done.

Maybe we should all just vote Green next time. It's an interesting proposition…