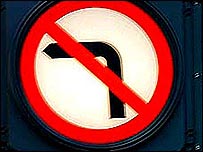 Coventry City Council have managed to set up a roundabout on the A444 where there are signs banning left turns at every single turn off. This meant that there was no way of leaving the roundabout without breaking the law. The signs are curerntly being covered until they can be removed. Cov once again has shown itself to be a model city, showing a bold and inventive way forward in the planning and execution of cities. This method is commonly known as the ‘we have no bloody respect for any road users’ method and involves designing the place in such a way that it is impossible to pass your driving test within the city limits as you clearly cannot drive around the place without breaking the law.

Anyone who has ever driven on the ringroad can tell you how accurate this assessment is.

It kind of makes me think of Alanis Morrisette’s ditty ‘Ironic’, or rather the bit where comedian Ed Byrne deconstructs it, reaching the line “A traffic jam when you’re already late” and saying.

7 comments by 2 or more people