After the question "Which countries has Britain not been at war with?" was posed the other day by a friend, a geekiness overtook me and I attempted to create a nice map showing all the countries Britain has been at war with, coloured in red.

This meant formal war, not just colonising as that was sometimes achieved with the aid of a few fired shots, plenty of deals with local leaders, and some western germs which killed the natives in vast amounts. I am sure there are places missing from this map (the infamously short war with Zanzibar is missing cos it's too small to colour in!) so any uber-geeks out there please correct me and the map.

Note: Hawaii isn't coloured in because Britain has never been at war with it. Alaska is coloured in as, whilst it wasn't part of America during the War of Independence, it was part of Russia during the Crimean War. Which is interesting. 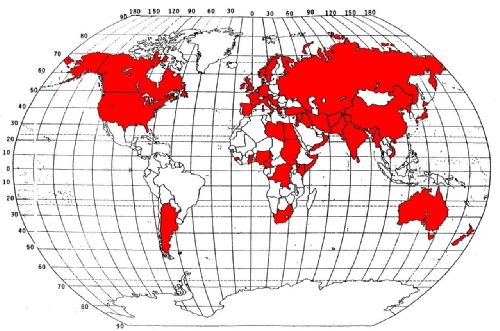