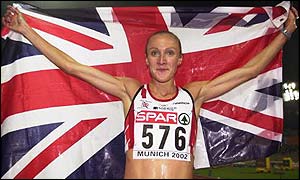 At Risk of becoming a Train Blog…

Well nearly. A little late, perhaps, back into Cheshire but this was not the fault of the train company (shock horror). In fact they did quite a good job in this case as some scally set out to prove that wearing Burberry and Kappa* at the same time* can seriously impair your ability to function as a human. Now this isn't a chav slagging excercise for the sake of it. This is an actual case of a local scally (who got off at my stop, urgh) getting so drunk that he locked himself in the train's toilet and refused to come out. The nice train lady had every right to go beserk with a screwdriver and a street map of Belgium, but she restrained and needs lots of commending and a pay rise for that.

So Durham and Newcastle. Two places I have only seen fleetingly in the past. Durham is like Edinburgh in that a great word to describe it is undulating. Hills. Hills everywhere. Not nasty, evil hills like the ones in Athens which ruined Paula Radcliffe's day (she's still a hero), but still quite tiring to walk up and down.

And my god it's a pretty place. Wouldn't want to live there (hey, turned down an offer from the uni so I know what I'm babbling about) but it was very picturesque in that vaguely gothic style that befits a major set component for Harry Potter. And my friend who did go to uni there (as indeed did roughly 12 people from my school) took me to see the courtyard of the cathedral with the words "You've seen the Harry Potter films haven't you?".

I'm pretty sure I saw one of them with her but nevermind. Look I can't remember, it's been a long day. There was this scally on the train…

I'm repeating myself now aren't I?