Sometimes I write long winded articles on this blog.

Sometimes it is completely unnecessary to do any more than just link and quote.

Finland's controversial entry for this year's Eurovision Song Contest – a heavy metal band called Lordi (The Lord) – has upset many Finns. The band members wear scary masks, which they refuse to take off, and the lead singer wields a chain-saw. 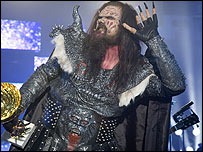 [T]he rockers have stressed their tongue-in-cheek attitude to entertainment. As if to prove the point, they had a hit in Finland with a song called The Devil Is A Loser.

General Cultural And "Are You Awake?" Studies Practise Exam Paper

General Culture And "Are You Awake?" Studies

Time allowed: 3 hours, plus 15 minutes reading time during which notes may be made (on no more than three sides of the paper unless you occupy more than four interspatial dimensions in which case consult with your youngest cousin before proceeding) but NO ANSWERS MAY BE BEGUN UNLESS YOU'VE BEEN GOOD

Answer one question from section A, two from B and as many as you can be arsed from C.

Read carefully the instructions on the answer book and make sure that the particulars required are entered on each answer book. Failure to do so will result in instant death.

Do not substantially repeat material from assessed essays and yes we do check. Or do we? You gonna risk it?

1. Tom Cruise and Katie Holmes have just given birth to Suri. Holly Cruise grew up in Holmes Chapel after moving from London which borders Surrey. Write some long winded bollocks about how irritated Holly must feel by all the attention she is currently getting as a result of Tom (no relation).

2. Why is Channel 4 not working properly when the only programme on TV these days that I watch is on Channel 4? Remember to include reference to how ace Green Wing is in your answer.

3. Crosby, Stills, Nash and Young. But who else? And why?

4. Discuss the moral economy of trying to get as many song lyrics into exam answers as possible. (Marks will be deducted for any uncredited song lyrics.)

5. Why didn't you revise more modules? You said you were going to but you just had to go to Top B and find out who's playing the Final Fling, even though it won't matter as you're a finalist and you'll go anyway because you've been to enough Scores where there have been shitty 1990s no-mark groups which you hated the first time but you still attended anyway because a) you were drunk and that's what drunk people do and b) on you first day you joined a sports team and haven't actually managed to say no to them once in the last two and three-quarter years. (You may use a dictionary for this one)

ANSWER TWO OF THESE GOBBETS

2. "You're only meant to blow the bleeding doors off"

3. "Man makes his own history but he does not do so in circumstances of his own choosing"

6. "You have reached the O2 answering service"

8. "Collected
The Best of Massive Attack
On Sale 27th March"

Write about something nice.