I spied these lovely poppies along Kings Hill Lane yesterday so returned with the Canon SLR in the evening and took a few shots but the poppies looked a little jaded and the shadows were too long. Returning this morning the lighting was perfect and the poppies looking even more gorgeous so I played around with the Av settings to alter the depth of field. The barbed wire fence, fence posts and grasses gave me plenty to play with in terms of composition.

Following on from Adobe Live 2004, I wondered how Adobe Live 2005 (26–27 May)would fare. The change of venue to the Design Business Centre in Islington was welcome – making it easily accessible from Euston. Last year the event was used to launch the CS Suite, and this year CS2; leaving me wondering whether subsequent years will follow suit.

The main auditorium sessions focused on design as the central focal point of all Adobe software development and the new opportunities the CS2 presents to the design world.

Multimodal
Multimodal: 'Create once, publish everwhere' seems to be the buzzword, and is the thinking behind Adobe's software development, recognising that many designers are now working cross-platform and publishing to a multitude of channels.

Photoshop CS2
Photoshop CS2 was show-cased, focusing on new features, many which are quite impressive, especially the filter vanishing point and the healing brush, which drew hushed tones from the audience.

Illustrator CS2
I am always eager to see what has been developed in Illustrator, especially terms of the vectorising of photos, something I often want to do. I was not dissapointed! The new Livetrace feature resembles Streamline (which dates back to a time only a few members of the audience could care to remember) which was a really useful tool. Livetrace has been independently developed by Adobe, and works in a similar manner to Streamline. A powerful and sophisticated development on the current trace tool in CS2, it is a big leap forward in the ability to vectorise photographs.

Weather Symbols have disappeared from BBC TV forecasts for good, causing a depression to form among fans of the traditional yellow sun and fluffy cloud.

So, new technology ushers in a new era in weather forecasting. Apparently, audience research showed that people found the symbols 'old fashioned' and 'boring'. I guess even weather forecasting has to move on with the times, but personally I have always liked the symbols, finding them clear and easy to understand, strangely comforting even if inaccurate! They have always had a slight authoritarian tone too which I have always associated, somewhat reassuringly, with the BBC.

Musing on what might lie ahead for the English summer 2005, I had a look on the BBC summer forecast. Apparently the trend is 'above average' temperature in Scotland and southwestern parts of England, however…

So, I guess, all in all it will be average! So, expect an unpredicatable mix of rain, sun, cloud and wind and a few hots days in July and August. Oh, and if you plan a BBQ, always have a contingency plan.

However, despite all this talk about 'average', I will, optimistically, expect and hope for better than average.

By combining the passion and creativity of two leading-edge companies, we will continue driving innovations that are changing the ways people everywhere are experiencing and interacting with information.

According to an article in Digit magazine (June 2005), analyst Steven Brazier at Canalys that he sees this as both companies bulking up against Microsoft. The first step will be both vendors supporting each others formats with Adobe likely to start integrating Flash into its products.

It will be extremely interesting to see how such integration develops over the next few years.

Warwick Blogs in the Guardian 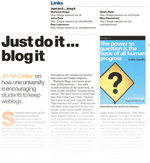 As John has drawn attention to in a recent post, todays G2 supplement carries an article about Warwick Blogs.

There is a scanned version of the article in here ,and although its probably easier to read in the on-line version, this shows the layout and inclusion of one of the poster graphics, which is somewhat pleasing to see in a national newspaper! The back page contains an image of another of the posters also.

Yesterday Google launched the beta version of Google Maps.
This version consists only of the US, but hopefully they will expand it at a later date..

Not flawless, and arguably not that deep, but this is an entertaining film that's three things in one: a portrait of a fascinating man, a trip to golden age Hollywood and a compelling political drama.

Leonardo DiCaprio joins a host of other stars in this substantial re-creation of the life of Howard Hughes the quirky inventor/film director. The life of the dedicated obsessive-compulsive is superbly crafter by director Martin Scorsese. I am not a particular fan of Di Caprio but his character acting is superb, drawing the viewer is into the complex personal life of a genius who constanstly teeters on the edge of reality yet never ceases to surprise. 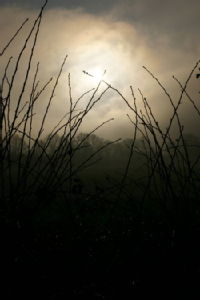 I took this picture this morning near Kenilworth as the faint winter sun attempted to push its way through the clouds. It wasn't actually very dark but the effect of the sun has silhouetted the twigs in the hedgerow. I like the way the twigs seem to be pushing themselves towards the light, there seems to be a message of hope in there also. A larger version is the the winter gallery.

Sugar giant, British Sugar made profits of more than £175 million pounds this year. It makes these huge profits from an EU arrangement that keeps almost all African sugar out of European markets and contributes to sugar dumping. While the government is lavishing loads on big companies like British Sugar, small-scale farmers around the world are struggling to survive.
This unfair system costs you money, too. Not only in the tax you pay the government for subsidies but also because the lack of competition means you pay more for your sugar. British Sugar is doing everything it can to stop the reforms and keep more efficient African farmers from lifting themselves out of poverty. Ask the government to do everything in their power to change this.

The 'Make Trade Fair' is running a campaign to push for sugar industry reform. All you have to do is click on the link and the site and send an email to Margaret Becker via the website.

On a design note, I love this site for combining style and substance beautifully.