Harnessing the power of red

Flicking yesterday evening between the US election coverage on CNN, Sky TV and BBC 24, (yes, sad I know) I couldn't help noticing how similar the screen graphics were. Basically, all contained shots of both men (not unpredictable), with large sections of red with white and black text. News updates flash across the screen usually with white text reversed out on a white background. This is reflected on the websites too. The predominant colours on the BBC 24 homepage are red and black, the CNN site has its main heading in red, with dark blue. 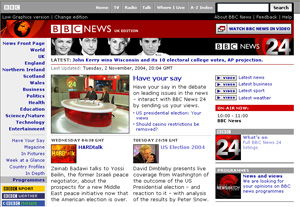 Working with colour all day as I do, such details can't escape my notice. I suppose that red brings a sense of drama and immediacy and grabs the attention in a way that other colours simply do not. In Britain the colour red also has a traditional political connotation of its own.

Red seems to be intrinsically encoded with a sense of immediacy, boldness drama and even danger. Red makes a visual statement that cannot be ignored. What is the origin of this? Maybe it is derived from nature, from the colour of blood. Wherever it derives its influence, its seems to be universal.

Interestingly enough, Mugabe has banned the colour red TV in Zimbabwe because it is the symbol of the opposition. Clearly he has taken the power of association very seriously.