Sweeping out corruption with a clean broom

In India, in New Delhi, the Common People’s Party (or Aam Aadmi Party), uses anti-corruption as a rallying cry and the broom as a symbol of opposition to corruption. ‘Vote for the broom’ has become an electoral slogan. You can read more about the AAP here

The notion that corruption is ‘filth’ that needs sweeping away is a long-standing and pervasive one that was shared by Britain when it was confronting corruption. Several visual satires of the eighteenth century, when there were anti-corruption campaigns, used the image of the broom. In this image from 1830 John Bull, the personification of the true Briton, sweeps his way towards reform of the parliamentary system. 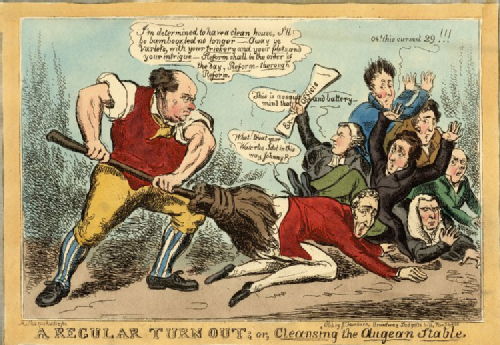 A number of the satires play with the story of the fifth labour of Hercules, which was to cleanse the Augean stables, where a thousand cattle had lived for 30 years without being mucked out!

The Hercules myth also shone a light on the anti-corruption heroes fighting against the odds – Samuel Whitbread (of brewing fame) and Sir Francis Burdett in England – a role that Arvind Kejriwal apparently seeks to play in India.

The image of the cleansing broom was made more common by the prominent support given by Lord Chancellor Henry Brougham (whose surname provided scope for visual puns on his name) to the cause of reform. In this image Brougham is shown beating the monster of corruption. 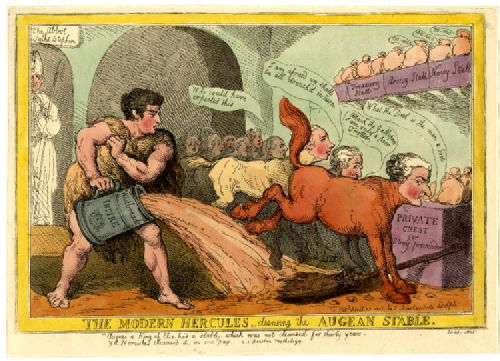 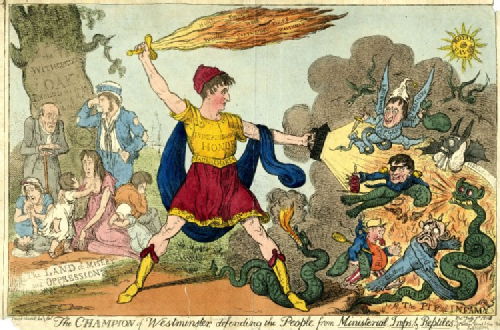 The broom was one of many metaphors used to describe corruption – later blogs will explore these visual and verbal symbols of the anti-corruption movement. 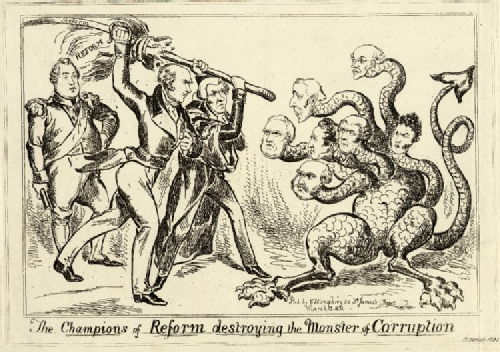