Old Corruption – what can Britain’s past tell us today?

In a report published today, for Transparency International, I show how Britain’s history has shaped what we understand by the term ‘corruption’ as well what measures we see as being effective or necessary to curb it. ‘Corruption’ and ‘anti-corruption’ have not been (nor are they now) universal, timeless, context-less phenomena but should be seen as conditioned by the past.

Taking an overview of Britain between the sixteenth-century Reformation and nineteenth-century Reform, I argue that our modern notion of corruption (centred on bribery and probity in office-holding) has evolved over time. In the process, alternative ways of thinking about corruption have been largely displaced.

For example, I show how the idea of ‘the abuse of entrusted power’, TI’s definition of corruption, emerged as a concept in the mid-seventeenth century and then strengthened over the next two hundred years, fundamentally shaping how we view public office. But the report also highlights how ideas about religious corruption have faded and some things that were once thought to be corrupting – the pursuit of self-interest, for example - are now often seen as helping to combat corruption (the pursuit of self-interest in a free market is seen by many as an essential component of anti-corruption).

What does the past tell us about how to curb corruption? The report highlights the transformations possible if non-partisan commissions systematically examine the administration of governmental departments and public finance; the additional weight when popular and elite pressures coincide; and how campaigns for strong ethics underpinned a reform agenda by ensuring that its rationale is embraced rather than being seen as a mere set of abstract rules.

My report also highlights the paradox inherent in state-building, arguing that the growth of the state is both part of the problem, because it facilitates corrupt access to enlarged resources and power, but also the solution, since it offers the best means to curb, restrain and punish corrupt behaviour.

Two caveats are made. The first is that corruption is a highly resistant problem and that hence reform can take a long time – there is no easy, quick solution. Britain’s own struggle with corruption occurred over many centuries and we would do well to remember our nation’s past scandals. The second is that those mobilising the rallying cry of “corruption” often do so for self-serving or even corrupt ends, so that we have to be careful how we view those pressing for change as well as those resisting it.

The report ends with a short case study of Samuel Pepys, the seventeenth-century diarist, offering readers two different ways of seeing him, as corrupt or not. The reader is asked to ‘judge’ Pepys. Deciding what we think about Pepys helps us explore issues today about how we define corruption and where we set the boundaries between private and public interests.

The report is based on research, funded by the Arts and Humanities Research Council, which will appear as a book published by Oxford University Press. 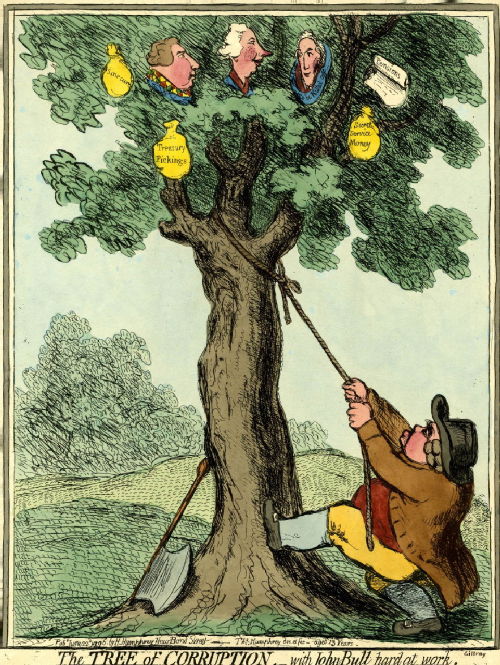 James Gillray, The Tree of Corruption with John Bull hard at work(1795)