Parliament and Conflicts of Interest

Parliament, in the era of ‘Old Corruption’, was tougher on conflicts of interest than it is today.

Despite some claims that ‘conflict of interest’ is an inherently modern concept [https://www.oecd.org/site/adboecdanti-corruptioninitiative/39368062.pdf], it goes back a long way. Indeed, Parliament, even in its unreformed state and when ‘old corruption’ prevailed, was paradoxically stricter about conflict of interest than it is today: MPs with financial interests in legislation were not allowed to vote, withdrew themselves from debates and in 1782 were banned from sitting in Parliament if they had an interest in a financial contract from the government. So might history help us here, if the parliamentary precedents and legislation were enforced?

As long ago as 1604 an MP was told to leave a debate on a bill in which he had a personal interest and this was probably not the first time this had happened, since the Commons resolved that this was ‘agreeable with former Order and Precedent in like cases’. Withdrawal from debate in such instances was confirmed in 1623 and 1626, and extended to cover the committee stage. In 1664 a vote of an MP with a conflict of interest was disallowed and challenging such a vote after it had taken place, or withdrawing before a vote, became the practice of the House. This was confirmed in 1797 when the prime minister, William Pitt, proposed compensation for those who had suffered from losses on money loaned to the government in what was known as the ‘Loyalty Loan’, raised to fight war against revolutionary France. 14 MPs who had an interest in the outcome voted for the compensation, leading to a challenge to the Speaker to rule on whether an MP could vote on an issue in which he was personally interested. Speaker Addington declared that it was the practice of the House that they could not and added:

when any measure is submitted to the House, the substance of which is to confer a pecuniary advantage, or diminish a loss, which is the same thing, I am satisfied it is not consistent with that mode of proceeding which the House has adopted on occasions of delicacy and importance, that any member should vote on a measure by which he intends to derive any benefit in case that measure should be carried into law.

The result was that the votes of the 14 MPs were disallowed. The same principle was applied in 1800 and again in 1811 (when in the light of a rehearsal of the earlier rulings the MPs refrained from voting). The 1811 instance clarified that that interest had to be ‘a direct pecuniary interest’. Even so, attempts to secure legislation on the matter proved elusive. In 1825 an attempt by a radical MP, Joseph Hume, to push for a formal motion ‘that no Member shall vote for or against any Question in which he has a direct pecuniary interest’ was defeated, but only because the House seemed reluctant to formalise a convention that ‘gentlemen’ understood. Hume summed up the debate by stating that he was glad that the principle that MPs with a conflict of interest could not vote was so generally recognised. This was again confirmed in 1830 and 1895. So it seems clear that MPs with personal financial interests in legislation should not speak in debate or vote on it. Why this is no longer upheld seems something of a mystery.

So, whilst it is really good to have a register of interests, might it not also be used to allow votes to be challenged and even voided when a conflict of interest is proven, as required by a good deal of parliamentary precedent? In 2016 72 (Tory) MPs who were registered as landlords voted down a Labour bill requiring landlords to make their homes fit for human habitation: https://www.independent.co.uk/news/uk/politics/tories-vote-down-law-requiring-landlords-make-their-homes-fit-for-human-habitation-a6809691.html

Would not the application of parliamentary precedent have prevented this? 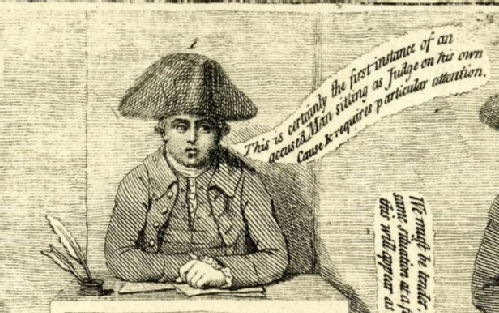 The image, BM Satires 6021© The Trustees of the British Museum, is a detail from a James Gillray depiction of the Committee appointed in 1782 to investigate victualling contracts during the war with America. They examined Christopher Atkinson, a corn factor and M.P. for Heydon, employed by the Board to purchase malt on commission, who was accused of cheating by overcharging and false accounting. The conflict of interest is apparent in Atkinson being an MP and hence potentially voting on his own investigation: the chair of the committee's speech bubble reads 'This is certainly the first instance of an accused Man sitting as Judge on his own Cause & requires particular attention'. Atkison was subsequently expelled the House but was able to return in 1796 after being exonerated - he successfully claimed that the fraud allegations against him had been malicious. He was nevertheless described as ‘a man whose sole object in this world is gain’: https://www.historyofparliamentonline.org/volume/1790-1820/member/atkinson-christopher-1739-1819

Moreover, the unreformed House of Commons – some fifty years before the Great Reform Act! – also passed legislation in 1782 disqualifying MPs from being able to sit in Parliament if they held an interest in any public contract. The act was an attempt to prevent the corruption of Parliament by private interests – something that had become an urgent matter in the light of the loss the year before of the war against the American colonies, a defeat that forced a fundamental review of the moral, economic and political state of the nation. It was generally acknowledged that excessive profits were being made in a corrupt way by contractors who were supplying war materials and money for the purpose of carrying on the American War. The law had something of a loophole in it, allowing exemptions for private companies of more than 10 people entering into a contract for the public benefit. It is worth remembering that this was passed when the number of private stock companies was tiny and restricted, after the first crash of the stock market in 1720. In other words, the exemption was not aimed at allowing a blanket evasion of the terms of the act. The act was superceded by the 1957 House of Commons Disqualification Bill, which removed the bar on MPs being government contractors or having a financial stake in contractors. Although there is still a requirement for MPs to declare their interets, is transparency sufficient?

Standards were reviewed even in the era of ‘Old Corruption’. There is of course a Parliamentary Commmissioner for Standards now - might the two dimensions of parliamentary practice identified in this blog be ripe for review in the twenty first century?