Black–listing rich exploiters of the system

Recent scandals about tax evasion have focused attention on whether the rich are unfairly benefiting from the ‘system’ without paying their way. The perception, damaging to the political process, is that politicians and their super-rich friends exploit, rather than fully contribute to, the state.

Such sentiments are far from being new. In the early nineteenth century radical journalists attacked a ‘system’ of corruption that they saw as pervasive and which enabled the rich to exploit the state, thereby pushing up the taxes of those lower down the social scale. Such arguments were, as now, sharpened by severe financial pressures, in this case the result of the huge outlay on the Napoleonic wars.

In 1807 the list of the rich who were exploiting the state to draw money from it became an election issue. This image shows a ‘genius of elections’ with ‘wings of corruption’ reading to John Bull a list of MPs who had been returned to Westminster and the bribery used by the government to get them there. John Bull sits resolutely on his box of property, refusing to part with any more of it. One of the monster’s legs is labelled ‘Red Books and Sinecures’, suggesting that the notion of a red book came from the parliamentary investigations which had revealed public expenditure. 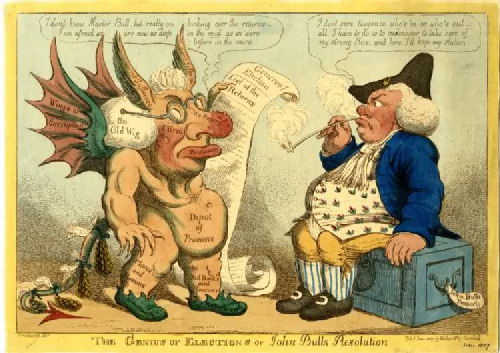 In 1816 ‘a commoner’ published the Extraordinary Red Book. Rather like a print-out of HSCB tax evaders it named and shamed those who held ‘Places, Pensions, Sinecures’ from the state, amounting to ‘a system of corruption’, with critical notes about ‘the expenditure of public money’ and tart comments about the national debt. Those listed included ministers, peers, MPs, the royal Court and other member of the elite. In the words of the preface ‘we have been ground down, and oppressed, year after year, to answer the purposes of men … born only to the idol of self-interest’. In this satire from the same year, John Bull is shown full of rage about the way in which public money was being paid to the rich.

Another best-selling list of the rich who had their noses in the trough was published in 2 volumes, 1820-3, called The Black Book, or Corruption Unmasked! Being an Account of Persons, Places, and Sinecures. So successful was this that further editions were published in 1831, 1832 and 1825, years in which agitation for reform was at its height. The compiler of the Black Book was John Wade, who went on to edit the

‘Junius Letters’, which had been sent to a newspaper in the late 1760s and early 1770s launching devastating attacks on the prime minister, the duke of Grafton, who was mercilessly satirised for both his corruption and his incompetence.

The idea of a black list nevertheless had a longer history. Although the Oxford English Dictionary gives the first use of ‘black list’ as 1624, twenty years earlier, in 1604, the playwright Thomas Middleton published The Black Booke, so named ‘because it doubly damned the Devil’, in which he attacked those who ‘corrupt with the mud of mischiefs the pure & cleare streames of a Kingdome’. Black-listing is thus intrinsically linked to Britain’s long history of attacks on corruption. 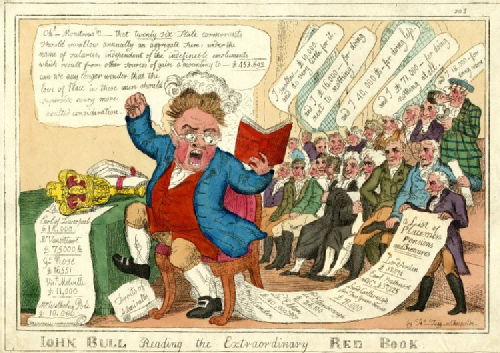