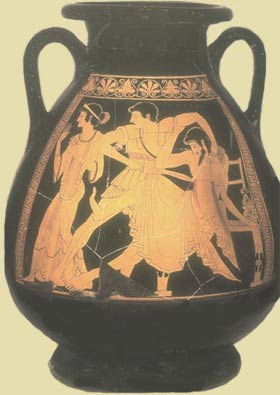 It is very difficult to determine wether or not the ancient Greek vase paintings depict the myths on which theatrical performances were based or the performances themselves. However, there are a few observations that can be made to help us come to a conclusion.

In the light of these observations, it would be fair to say that the Ancient vase paintings are not especially reliable as a source of information about theatrical performance. However, they do provide a useful documentation of the myths that formed the basis of theatre for the Greeks and the stories that were the inspiration for performance at the start.

The small wooden stages known as Phlyax stages were simple constructions. There was a double door at the back which provided an entrance for the performers and steps leading down from the stage to the ground level of the audience.
In terms of tragedy performance, these stages would provide a intimate and clostrophobic atmosphere perfectly apt for the material being performed. For example, when the Furies crowd in on Orestes as he begs for assistance from Athene, the atmosphere should be tense and restricted, perfect for representation on a smaller stage. However, the Greek performances were specticals of grandeur with elaborate costume and large choruses. Practically, therefore, these small stages may have been restricting and it would probably have been necessary to make use of the space surrounding the stage aswell as the stage itself.

The most sensible positioning for Apollo and Orestes in the opening scene would be in the area on the ground directly infront of the main stage. Here they could hold their private conversation intimately. They would be close enough to the audience to make them feel priveledged to the conversation but in a good position to exit quickly, leaving the main stage free for The Furies and Clytemnestra, who dominate the scene with powerful speech and dramatic appearance.
The Furies would hang drapped across the mains tage and down the steps, like a horrible disease that has tarnished the shrine. Clytemnestra could then enter from the door in the back of the stage, gaining immediate impact. 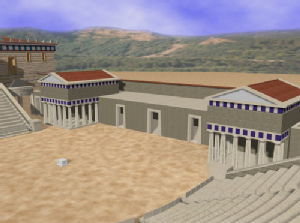 The stone skene built during the Lycurgian period was a very impressive structure and certainly had it's advantages.

However the huge auditorium that was built to accommodate the vast audiences that attended the theatre meant that voice projection was of key importance. Also, the visual impression of the performance needed to be hightened for the benefit of the audience members seated far away from the action taking place on stage.

It is thought that the Greeks may have made use of painted clothes in order to give a sense of setting to their plays. However, large bold props could also have been used as visual symbols to suggest scene changes, for example, large pillars could have been wheeled on to suggest the columns of the Acropolis. A change of location on stage coud also suggest that the setting for the action has shifted, for example the scenes set in the temple of Apollo could have been presented on the ground level with the scenes in the Acropolis taking place on the roof of the proskenion. The large performance space available at the Theatre of Dionysis during this period offered many possibilities for more diverse staging and scenery.

It has been traditionally assumed that the strongest position for a performer on the Greek stage was directly infront of the central doors of the skene. However, David Wiles has recently suggested that the most sybolically potent position was actually in the centre of the orchestra. Which of the two staging positions was used would undoubtably have had an effect on the way a scene such as the binding scene in the play "The Oresteia" was interpretated by the audience.
Positioning the performers further away from the audience by the doors of the skene would probably lessen the impact of a scene that invites tension and emotion. Not only would the performers be restricted spatially but the connection between them and the audience would be lessened and the emotional intensity of close proximity lost. However, bringing the performers out into the centre of the orchestra would be practically more successful allowing free movement in a larger space. It would also highten the emotional involvement of the audience. Having hideous representations of creatures such as the Furies performing in close proximity would increase the repulsive impact of the scene more than if they were removed to the skene.
Also, positioning the chorus and the actor playing Orestes on the same level out in the orchestra would suggest to the audience the hoplessness of his situation. Without the help of the Gods, he is left defenseless. The moral message of the dependancy of the people on the Gods and their infinately higher status could be aptly presented through certain spacial decisions. In a performance where the visual impact is of equal importance to the spoken script, staging becomes an important indicator of meaning.

In the Greek theatron the best seats would have been near to the front where the dialogue of the performance could be fully appreciated aswell as the visual spectacular. Audience members seated at the back of the theatron would probably have experienced difficulty hearing the dialogue of the performance and relied on the visal impact for entertaiment. However, all the seats would probably have felt physically uncomfortable after extended periods of time, joustled together with thousands of other people. The experience was definately not for the faint hearted!
The theatrical experience for the ancient Greeks would warrant comparison today with attending the final of the World Cup. As W.B. Stanford has said:

"If someone beside you sobbed or shuddered or trembled, you would feel it directly, and a wave of physical reaction could pass like an electric shock through all your neighbours . . mass emotionalism flourishes in compact crowds of that kind."

Today, theatre as an experience is much more tame. The audience are seated in plush seats with personal armrests and an unwritted law about "personal space." The closest thing today to the united, patriotic experience that theatre gave to the Greeks would probably be The Last Night of the Proms in the Royal Albert Hall where a small scale demonstration of national pride can be seen.