As usual, I seem to have neglected this blog for long space of time. I suspect that in the meantime not much has actually happened, but here are some of the highlights of the last few weeks:

Of most excitment recently, I spent a week in Scotland with my family. The purpose of this trip was to see if some elderly relatives were still alive (which, luckily, they were), but we fleshed it out by combining this with a kind of circular tour of the country. This involved an atmospheric scattering of rain, hills, sheep and Scottish pancakes, though I was not tempted at any point to sample a haggis (I strongly believe that no good can ever come of eating something made of a sheep’s stomach). There was also the disappointment at discovering that there was NO COWIE TARTAN in the ‘Trace your Scottish Ancestry’ books in the giftshop at Dunvegan Castle on Skye (I am very disappointed in my ancestors for not having devised one), softened only by an excellent jacket potato in a nearby restaurant.

On the way north, we visited Edinburgh, where lots of festival-related stuff was going on. There was a large preponderance of bagpipes, a Korean man blowing an annoying trumpet, some Peruvain people with panpipes, a really good Russian brass band from St Petersburg, and lots of scary people floating about the streets distributing leaflets and picking on unsuspecting members of the public, which reminded me a lot of Birmingham. Coming back, we stopped briefly in Dundee, where we inspected Captain Scott’s ship the Discovery and saw footage his first Antarctic expedition, including the ship’s cat! All in all, it was a good trip, and I like to think that the general wetness of much of the holiday made the experience more authentically Scottish. (Note authentic Scottish scene, below, pictured in a rare moment of sunshine.) 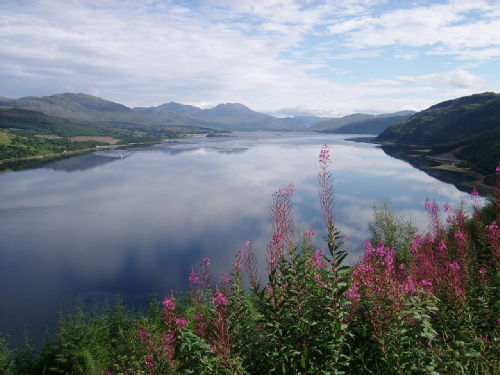 Moving on to more recent momentous events, last Thursday’s excitement consisted mainly of re-signing the contract for my house. The man from the agency came over in the afternoon to conduct what had been described as an ‘inspection’, though most time was spent filling in documents and dropping meaningful hints about installing double-glazing so that the gas bill is less extortionate. The agency were alerted for about the 4th time to a broken drawer in the kitchen, and my housemate, who has higher standards than me, requested a new shower curtain, which the agency agreed to pay for. We were also handed a ‘welcome’ pack, which I think is an innovation for this year. This turned out to be a list of things we should not do (phrased, of course, in the nicest possible terms), including allowing stray cats into the property in case they urinate on the furniture (it is nice to know that at least somebody at the agency has imagination). I conveniently overlooked the ‘no pets’ rule, which apparently extends to insects.

Much of yesterday was spent attempting to install broadband internet in our house. Things all went quite smoothly initially, luring us into a false sense of security, but it then transpired that the internet would not work on the socket upstairs. Various experiments were then tried to resolve this problem, which included plugging and unplugging wires in a series of different sequences and combinations, obviously with great scientific rigour. Ultimately we succeeded – with the whole thing arranged exactly as it had been to start with! This made no sense to me at all and gobbled up several hours of my time. Still, it is always character building to spend a few hours wrestling with IT, and maybe I learned something from the experience, although I seriously doubt it.

Meanwhile, Jackie the hamster continues to flourish, though of late she seems to have developed a carnivorous streak. This first manifested itself last Sunday evening, whilst I was running her in the hall (I use the term loosely – not much actual running usually goes on in these sessions, most of which are spent inside a bag chewing cardboard*). I had been carefully shifting my position on the floor in order to distance myself from a fairly substantial spider, which looked as though it might decide to run up my leg, when the hamster scuttled over, grabbed it and ate it! It obviously whetted its appetite for meat, since it attacked a woodlouse yesterday and turned the poor thing on its back before I intervened. I’m not really sure whether this kind of thing constitutes normal behaviour in the hamster world, or whether Jackie’s insides are equipped to deal with a meat-based diet, but so far no ill effects seem to have been felt.** Hopefully Jackie will not graduate onto larger prey, or my toes may be at risk.