I would say summer break flew by me, but in reality the three months felt so long. Coming home was such a heartwarming experience, greeted by the warmth of the sweet Singaporean sun, friends and family members as well as the familiarity of everything. While everything felt the same, there was one stark difference - and that was the lens of my perspective.

I am definitely a different person from who I was before leaving for university, and for the better. I know it’s cliche to say that university changes you, but I truly experienced it for myself. I came back an even more independent, confident person and my thoughts have taken a more worldly perspective and I definitely needed to come back to realise how jarring my growth has been.

The first social activity I busied myself with upon coming home was celebrating Hari Raya. I’d missed the first few days of it, but celebrations were still in full swing and I threw myself right into some intense family time. 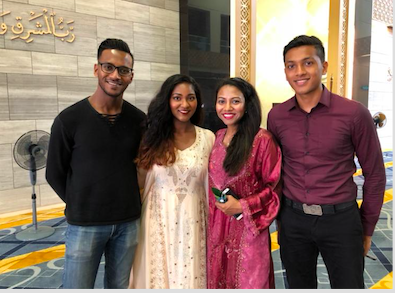 My siblings and I in our traditional clothes, celebrating Hari Raya together.

I also caught up with old friends, and marvelled at the Singaporean skyline that I’d dearly missed in the past year. 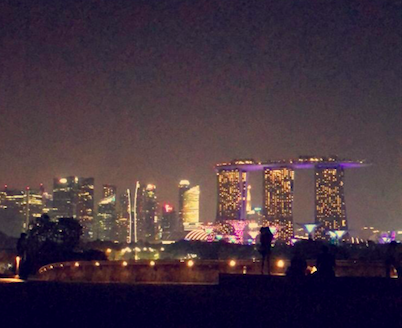 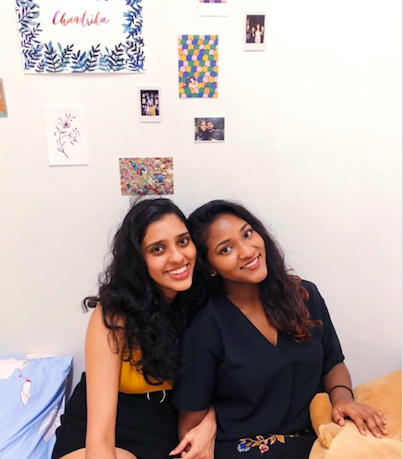 I also spent a week on the beaches of Krabi, Thailand, to de-stress from the year in university and in anticipation of the stressful internships I had lined up for me. 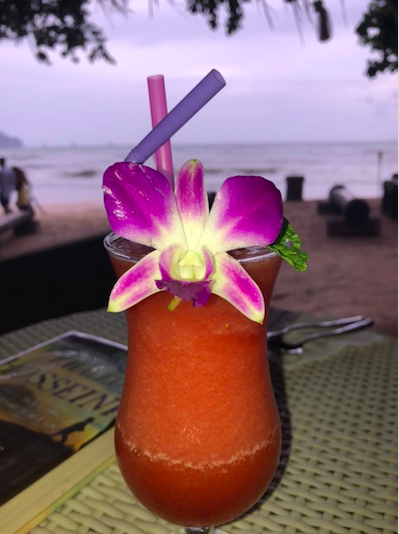 About 3 weeks since I got back from the UK, I started an internship with the State Courts (“SC”) and Family Justice Courts (“FJC”). I found out about this internship via the United Kingdom Singapore Law Student Society (“UKSLSS”). I was a ‘University Court Friend’, working under the Community Justice Centre’s Primary Justice Project (“CJC” and “PJP”).

During this internship, I had the opportunity to spend some time across multiple departments in both the SC and FJC, including but not limited to; family court, crime court, bail centre and magistrate’s complaint. Some of my responsibilities included assisting litigants in person (“LIPs”) sort out court documents, and helping them apply for a personal protection order or domestic exclusion order via the court’s e-litigation platform (iFAMs). I also assisted the crime court and family court’s facilitator, and sat in the free pro-bono sessions held by CJC. At the very end of the internship, there was an appreciation tea for all the interns and some of the judges were invited to speak. I had the honour of emceeing for the event, and it was such a good way to tie up the excellent experience I had during this internship. 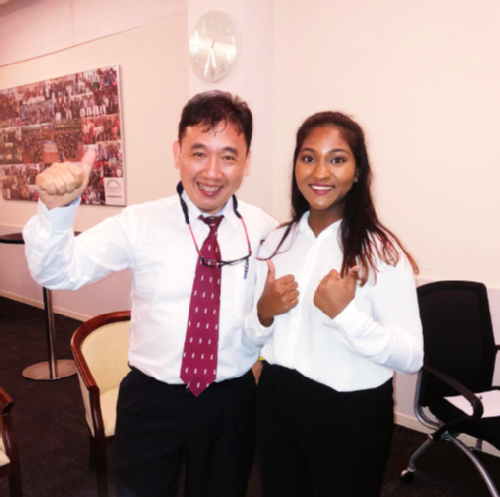 A quick shot with District Judge Christopher Goh, who sits on the helm of the SC's criminal court 26, and is also one of the jolliest people I’ve ever met! According to him, the biggest challenge of being a judge is that “you need to have a large bladder, you don’t get many toilet breaks!”. (Kidding) Obviously the job of being a judge is so much more than this, but somehow DJ Goh is excellent in injecting a light-heartedness to each and every conversation he engages in, despite the serious nature of his career.

I loved my experience in this internship and I felt that I managed to learn so much. There’s a theoretical cap to how much you can learn in school, and this internship really taught me about the practical and procedural manner in which a court takes on cases. Additionally, I managed to refine some of my knowledge of the Singaporean justice system. Singapore is a commonwealth country, and thus shapes its legal system similarly to the English legal system. Regardless, there are still some finer procedural differences and reforms Singapore has made to its local law that I would never have known about, if not from the exposure of this internship. For that, I am really grateful for all I’ve managed to learn.

Alongside this internship, I took on the role of being an orientation group leader with Warwick’s Singaporean Society! It was quite exciting being able to form the fresher’s first impression of Warwick. It didn’t feel too long ago where I was one of the fresh faced freshers, excited for my own experience to begin. It was really nostalgic, carrying out the activities I did with my group last year. 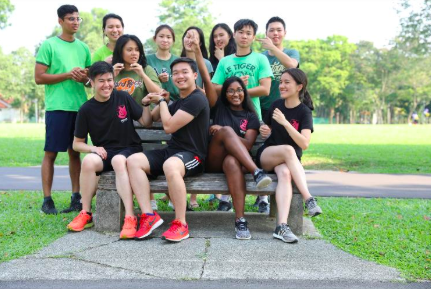 Following the state court internship and the singsoc camp, I spent 5 week interning in Oon & Bazul, a mid-sized law firm that specialises in maritime law. I was in the Restructuring and Insolvency team, a really small team of 3 and was led by a partner, Tan Meiyen. Meiyen is a Warwick alumni, so it was really inspiring to see the excellent career and name she’s carved for herself and it was an honour being her intern.

I’ve personally not studied Restructuring & Insolvency nor company law, and I came in really unfamiliar with Singapore’s Companies act and the Model Law’s UNCITRAL Cross Border Insolvency - all of which are key pieces of law and are at the heart of her practise. Having said that, 5 weeks is a long time and the associates were really patient in explaining to me bits of the law that I found difficult to digest. My unfamiliarity with this area of the law did not prevent me from getting my hands dirty in the grit of everything and working on the cases alongside the team. Towards the end of the internship, I realised that I had schooled myself in Restructuring and Insolvency such that I could understand most of the jargon and was able to comprehend most things and this is a stage that I am really proud of myself for getting to. Although I found it really intimidating at the start, I didn’t let that get the better of me and trudged on. I’ve learnt the importance of being able to think on your feet and constantly learning, and I understand now this needs to continue even if you're deepin in your career - learning doesn’t end in school. Since the law is constantly progressing and being reformed, it’s so important to make sure your knowledge remain relevant.

I was the only intern in the firm for the time I was there. One of the advantage of that is that I was able to do such a wide range of work - for example attending court sessions, doing up a bill of costs for one of the firm’s recently completed cases, draft a settlement agreement contract, work with the associates in editing an article for the Global Restructuring Review, draft legal articles updating clients on reforms made to Singapore’s Restructuring and Insolvency Laws and attend tele-meetings with lawyers from other jurisdictions such as the US and UK who were also representing the same clients (since the insolvencies took place across borders and hence involved multiple jurisdictions). I also did some really exciting legal research involving issues that has never been addressed by the Singapore courts, since it’s only been recently (2017) that Singapore adopted the UNCITRAL Model Law.

A further advantage is that I spent all my time with the associates and from there I partook in so many insightful conversations and was able to gain a better idea of how the daily life of a lawyer is like. I used to be really intimidated by the idea of corporate law, and was convinced that family or criminal law is where my calling lies. While I still think this might be the case, I’m not closed off to the idea of trying out something new. Having done this internship, I know I can do it if I put my mind to it and I’m so much more open to different practises within the industry. This internship also gave me a realistic view of what my working life would be like in the near future, and it made me start thinking seriously about the kind of career I want for myself. I really enjoyed the culture of the firm, and everyone was really nice and approachable and I’m hoping to be able to find a firm in the future as accommodating as this. In all, this was the most challenging and intensive internship I’ve ever taken part in, but it was also the most rewarding and eye-opening.

Moving on, I also attended the annual scholarship dinner! It’s always an honour to meet the trustees, and I also got to meet this year’s scholar, Jade. The dinner is proving to be a good checkpoint of my Warwick experience, for I managed to reflect and share on my university involvements. It also always humbles me that the trustee sees the potential in me and chose to invest in me, which further fuels my motivation to do well. 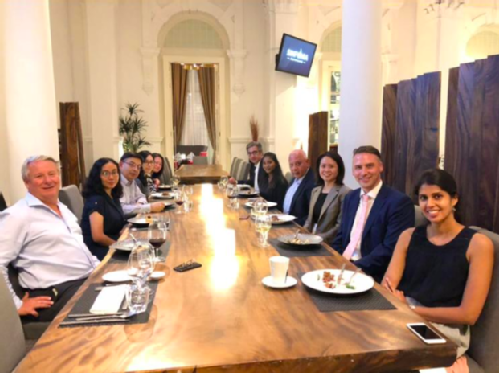 After my second internship, I only had a week to say my goodbyes before I left for for the UK. 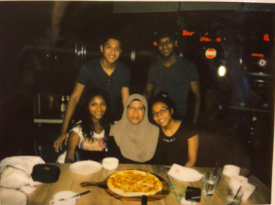 Spending a meal with the family! 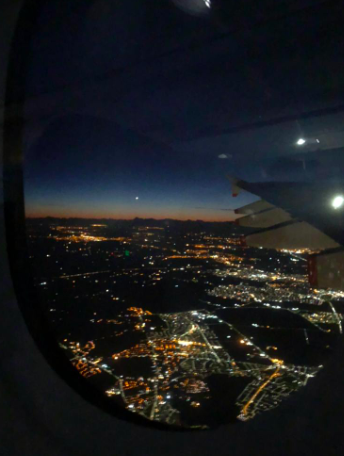 The view when I landed in London. What a gorgeous sunrise!

It’s been almost a week since I got back, but it’s already been a busy blur. The day right after I landed, I had my first societies’ event - the fair! The societies fair is crucial as that’s when you attract the fresher’s, and I’m glad it went well! We’re jumping right into planning events, with the first being a meet-the-exec tomorrow and a 5k Charity Run next Saturday. We’ve been planning these events from summer and it can be really time consuming but its for a cause I love and support, so that alleviates all the stress and makes everything so exciting. 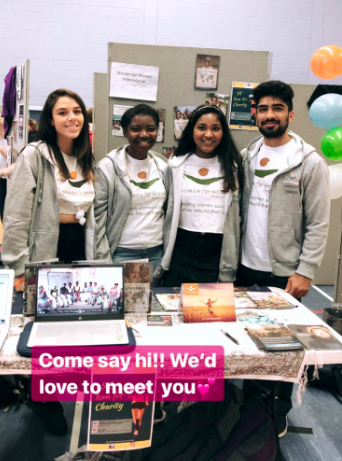 It’s quite crazy to think that I’m already a year 2, but I know for sure that year 1 superseded all my expectations and I’m sure year 2 will do the same. I’m so excited for what’s in store me, and I am ready to give it my all!