Having spent such an exciting, rejuvenating and productive summer, I was all charged up to start third year. This year is really significant, it ties up my entire Warwick experience and I wanted to do it right. Having spent the last two years still feeling relatively green in being completely independent, this year I knew exactly how to navigate my surroundings and I was so excited to start the year. My goals were to firstly, do the best I can academically and put in all the work necessary for an excellent grade. Secondly, I wanted to seek the best employment opportunity for myself and hand in applications I am proud of, to firms that really interests me. Thirdly, I was always conscious that this might be my last year in the UK, so I wanted to embrace every moment to its full potential and enjoy the experience being a carefree student with some of my best friends.

A major change for me this year was the switch from living in Coventry, to Leamington. When I first moved to Leamington, I knew it was a good decision. Although it is further from campus, I found myself really appreciating the distinction between campus and home life. It also helps that Leamington is profoundly beautiful. It boasts uniformed white architecture with intricate metalworks, lush gardens, expansive rivers, friendly locals and quirky independent cafes. For these reasons, Leamington felt like home from the beginning. Here are some pictures of Leamington and campus in its full autumn glory - one of the prettiest seasons! 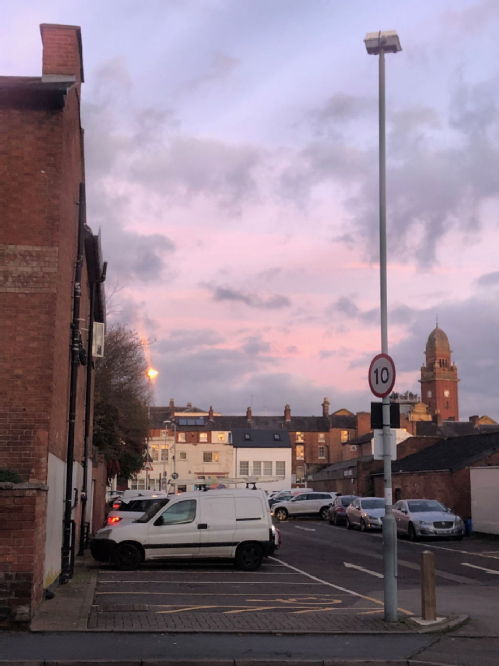 Term 1 was academically hectic for me, especially because I had a few 9ams per week, and I pledged to attend all. Being a morning person never came naturally to me, but I wanted to instill a sense of discipline for myself. For example, on Monday mornings, I would wake up really early and bake banana bread by 7am. Then I would get ready, go for my 9am Islamic Law lecture (which I absolutely loved learning), come back to Leamington by noon, and do my grocery shopping. By early afternoon, I'd start meal prepping for the week. Nothing feels as good as having a routine, and sticking to it.

This is an image of the type of food I would prep for myself, especially when I know I have a busy week ahead and won't have much time to spend on cooking elaborate meals. However, when I get a chance to, I do love to cook myself a nice meal! Such as this - This year was all about challenging myself, and one of the things I wanted to work on was being better with money - not just managing my money better, but actively making more. One of the ways I did this was through picking up 2 part-time jobs.

I worked for Warwick's development office as a student fund raiser for their telethon campaigns, an initiative to raise funds from alumni for the Universities’ fundraising projects. It quite a laborious role as I had to work 12 hours a week across both evenings and weekends. However, I really enjoyed it as I got to enjoy a high degree of interaction with Warwick alumni.

Though not all calls are successful, this role has improved on my ability to stay cheerful and positive in the face of constant rejections, without letting it faze the quality of my calls. It helps that I really support the cause of the campaign, as part of the money raised goes towards Warwick scholarships. As a beneficiary myself, I was proud to showcase my positive experiences as an example to potential donors - especially when they share my enthusiasm in making education accessible. For the autumn campaign, I was one of the top fundraisers, raising over £17,000 in both regular donations and single gifts. However the best part of the job for me, was that through hours of chatting with strangers on the phone of all ages, I was offered valuable and insightful career, life and even love advice. Sometimes, I'd speak to old and happy married couples who met from Warwick - these heartening interactions shaped the highlight of my role.

The second job I took on was waitressing at a Mediterranean restaurant in Leamington, Elma's. It's directly next to my house, and I spent every Saturday evening there. Working in a restaurant is an excellent way to break out of the university bubble every Warwick student is familiar with. I made friends with the chef, and the other workers - their age completely ranges, and its really refreshing to meet people so removed from the comfort of the Warwick bubble. I also became really close with the family that runs Elma's. They own multiple restaurants in Leamington, and they introduced me to some businessmen who also own many of the cafes I frequent. Unexpectedly, working at Elma's gave me an intimate commercial perspective on Leamington's restaurant industry. Overall, it was a really excellent experience working for them and although I decided at the end of first term that I couldn't handle the rigour of 2 jobs and gave this role up, I kept these connections, and it was really nice to have a restaurant to come back to that feels like home.

This academic year I fully engaged in the role of Project Leader for the Warwick Law Clinic. Although I was already familiar with the project, having been an advisor for a year, being a Project Leader offered a different perspective and carried heavier responsibilities. The start of the year was really hectic, as we had to recruit and train new advisors. Since there was an overwhelming number of applications, narrowing down to 12 advisors was really challenging and time consuming, especially since many of the candidates were excellent. However, deciding on the final 12 because we believed in their ability to thrive in the role, training them, and eventually seeing them conduct successful interviews to our clients and give excellent advice is immensely satisfying. It makes the hard work of managing the advisors, overseeing the interviews and communicating with all stakeholders involved (Wright Hassall, Warwick Volunteers & Sydenham Community Centre), worth it.

As Project Leader, I initiated a goal of improving the project by attracting more clients and hence making a greater impact on the community. We did this by making easily understandable sheets to navigate the complex legal aid system and putting up posters across community hotspots in Leamington Spa and Sydenham. These initiatives were outstandingly successful. This year, we received a three-fold increase in clients. The cases we received were also significantly more complex - for example, we dealt with tax-avoidance and immigration issues. I am really proud of how far the Law Clinic has come in this academic year, and am so excited to continue seeing how far it will grow.

Event at the Cinnamon Club

In November, I was invited to an exciting event held in the Cinnamon Club in London, to commemorate Warwick welcoming it's first Singaporean student 50 years ago. This event was an effort to celebrate Warwick's commitment to strengthening its ties with South-East Asia. It was a small gathering, attended by Her Excellency Ms Foo Chi Hsia (High Commission of the Republic of Singapore in London), Christine Ennew (Provost), Afua Osei, (Associate Director of Alumni and Events), some Singaporean and Malaysian alumni, and Jade and myself. Plenty of the alumni were in the legal industry, and it was really good to hear career advice from such established professionals. I enjoyed and honour the opportunity to sit at that table, and participate in celebrating Warwick's success. There was a pretty sunset outside London Marlybone's station the night of that dinner. At the end of such a long and exciting term, I took a short holiday to Lisbon with one my best friends. This trip was much needed, and I fell deep in love with Lisbon's seaside, pastel palaces, and their penchant for the sweetest pastries - despite being shockingly sweet, I stand my ground that pastel de nata is one of the best culinary inventions. We stayed in a hostel in Lisbon, where we met some of the most adventurous people. This trip really reminded me all over again why I love travelling so much. One of the many people I made friends with was a Brazilian guy who was on a scholarship to study chemical engineering in St Petersburg and we spent a good portion of time just talking about religion, politics and life. Funnily enough, I never even caught his name - such is the beauty of these profound yet fleeting interactions.

Here are some pictures from Lisbon! 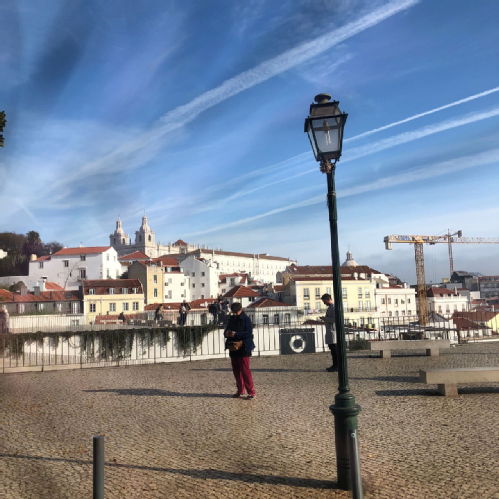 One of my favourite parts of my Lisbon trip was a ride on the Lisbon Tram 28. The ride takes you down Lisbon, through the old streets and gives you the best vantage view of the city. I sat through the entire ride in complete awe of how stunning Portugese architecture is. This is how the tram looks like from the outside and inside! Honestly, Lisbon looks like the backdrop I imagined only to exist in fairytales. After coming from Lisbon and spending some time working on essys in Leamington, I spent Christmas and New Years with the family in Durham, as usual. This time, my cousin's beautiful baby boy joined us! In between Christmas and New Years, I hopped on a train to Scotland as it's next door to Durham. I spent a few days in both Glasgow, and Edinburgh. Although I had some friends who I met sporadically who lived in these places, I was primarily alone on this trip. I wanted time alone to work on my essays, and to reflect on the blessed year I just completed. I think in many ways, 2019 was one of the best years of my life. I have never previously gotten the privilege to travel as extensively, I was surrounded by so much love from both friends and family, and I was loving what I learnt in university. 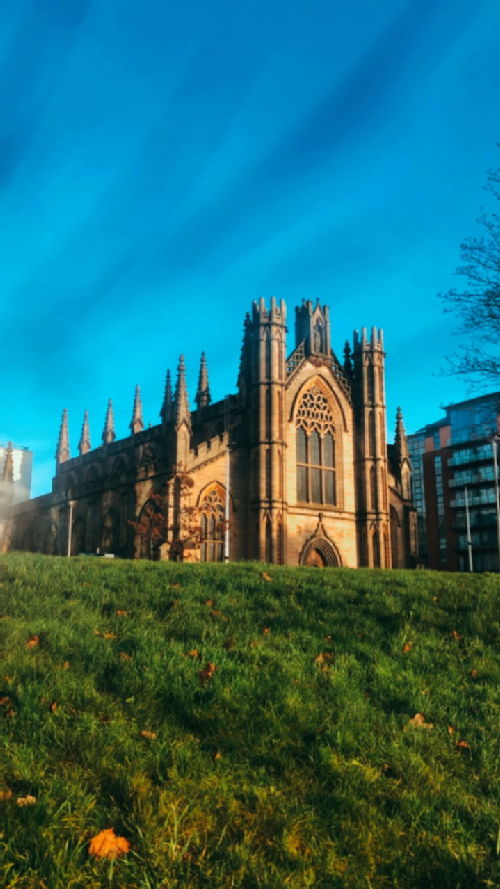 In between writing my essays in cosy cafes, I went for long walks, soaking in the pretty views (and bearing the crisp Northern cold at the same time!). I people-watched and did plenty of self-reflection, and it was such a peaceful and satisfying way to end my year, and the first term of being a third year student.