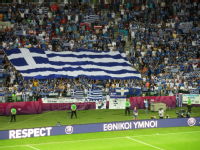 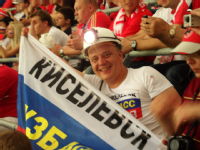 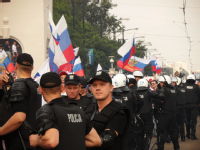 Despite days of media tension-building, the Polish-Russian war of 2012 went by with only minor incidents – and with little damage even in football terms. 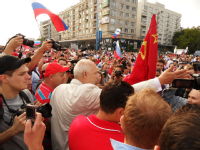 I went to the start of the much-disputed Russian march, at the beginning of the Poniatowski’s bridge over the Vistula. A large police presence defended a few thousands Russians who were in a good friendly mood and avoided ostentatious communist symbols – tsarist ones prevailed. Maverick rightwing politician Janusz Korwin-Mikke, in desperate search of publicity, tried single-handedly to stop a lonely USSR flag. He caused amusement instead of a fight, but he is the usual case (think Le Pen and Nick Griffin) of far Right in a neck-tie, cunningly making space for the violent one. Only a little more threatening were little groups of Polish hooligans, who shouted their hatred to the Russians and ‘Russian whores’ to the police who defended them. When I had to cross the police lines to leave the Russian march, a Polish policeman addressed me in fluent Russian explaining me that I was going in the wrong direction. It is not the first time that I am mistaken for a Russian in Poland – but it is the first time that I am treated politely for this.

A little later, more Polish hooligans tried to attack the Russians and were dispersed by water cannons, with about 200 arrests and a few minor injuries. Comparisons with 1794, 1830, 1905 and 1920 are rather misplaced.

I then moved on to the Polish fans zone under the Palace of Culture and Science, the skyscraper that Stalin donated to Warsaw. Some 50,000 Polish fans, and I could spot only one Russian, a young woman wrapped in a national flag. Russians can be no less brave than Poles.

Some pictures from around Euro 2012 here, and more occasional comments on Twitter: @guglielmomeardi