I am in Scotland, immersed in peace and nature, light-miles away from burning England. But it is impossible to ignore what’s happening there, in particular when former neighbourhoods in Birmingham are affected.

Boris Johnson, London’s Mayor, interrupted his holiday and yesterday was on the streets of London, armed with a groom as if helping to clear up the mess. He didn’t really need a groom though as he could have used his hair, but politicians are there to speak and not to clean up. He said some sensible stuff on the ‘true spirit of London’, and I would add that there is a ‘true spirit of Birmingham’ too, where it appears that three men died tonight while standing to defend their neighbourhood. But then he moved on saying that ‘it is time that people who are engaged in looting and violence stopped hearing economic and sociological justifications’.

What confusion. It is true that academic experts in the heat of events should rather not speak too much – we had a terrible example a few weeks ago with armies of ‘security’ and ‘terrorism experts’ explaining to us that the Oslo bombing was Al Queda’s work. But Johnson caught the occasion for a cheap attack on social sciences and progressive thinking, adding only to confusion.

It is not the job of social scientists to explain individual events – for that there are journalists, police investigators, judges, local authorities, and eventually historians. Even more so for contemporary events. Despite the recent stress on ‘impact’ from research authorities, the best social research actually proves its usefulness only years, sometimes decades after it is carried out: take Becker’s research on youth subcultures in the 1950s, that became topical ten years later. Sociologists, in particular, are interested in patterns, regularities of behaviour, and should never try to explain ‘everything’: human behaviour is just too unpredictable. By the way, even natural sciences can predict very little, and mostly talk of probability only. So, as sociologists we are not so much interested in the Tottenham riots, but in riots as such – in the way Simmel said they were interested in king John and not in King John. Sociologists cannot solve the ongoing riots, but can try to explain why they tend to happen in certain places and at certain time. Explaining has nothing to do with justifying, but it is necessary if we don’t want repetitions, and therefore Johnson should in the future pay more attention.

These riots remind me strongly not so much of those in the Paris banlieus in 2005, which were much more political, but, rather, those of Los Angeles in 1992: which also had as immediate cause a police killing, were aimed at shopping malls, and took place during an economic crisis. In this sense riots are an example of 'succesful' adoption of the American social model - indeed in Southern Europe they are virtually unknown. The racial element was probably stronger in Los Angeles, though: in England now there may be a significant black component, but overall looters from all ethnic groups are uniting, and thank’s God no ethnic group is being targeted by the violence (in Los Angeles it was the Koreans, and in Birmingham in 2005 there was a minor Asian-Black Caribbean riot). And without falling into justification, cuts to community social services did matter in both cases: in Tottenham, the majority of youth centres has been recently closed because of the cuts, and I can see in my Tile Hill neighbourhood in Coventry what difference a youth centre can make.

But sociologists can also tell something to some kind of leftists. I remember people so excited the Los Angeles riots footage (probably the first riot so heavily televised) that they watched them with rap soundtracks. Now, as Merton famously said, there are various kinds of ‘social deviance’, depending on whether it is on the goals or on the means. Gangs of looters are not deviants in terms of goals or values: they just want to consume more in a consumerist society. They are just deviant in terms of the means they use to achieve their socially-shared goals. In this sense, they are not unknowing allied of the Left, but actually it is its exact opposite: the radical Left should be deviant in terms of goals, but, if it is democratic, not in terms of means. And historically, let’s remember that the 1992 riots in Los Angeles finished with the intervention of the army, more repression, and a wave of ‘zero tolerance’ policing across the whole United States.

March for the Alternative 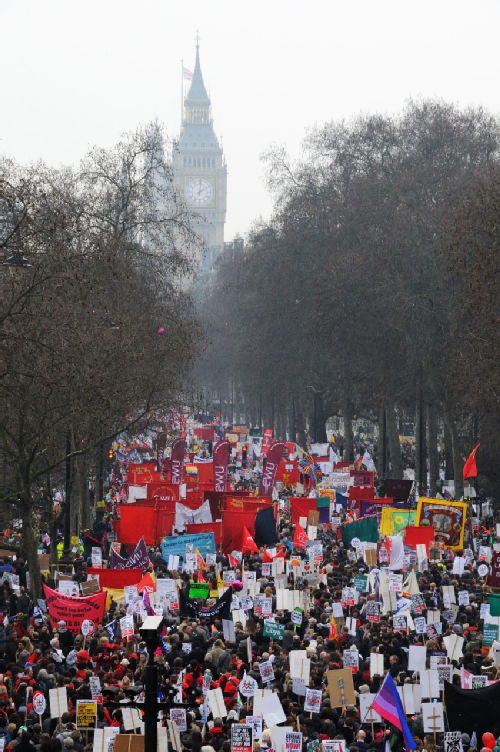 Very big demo against the cuts to the public spending in London today - 2 hours walking backwards through the marching crowd until I found my trade union.

Will it affect the government? Of course it won't. Not even the bigger demonstrations in France last autumn affected their government and their cuts (there were French veterans from those demonstrations in London today). That's not the point. The point is that such an event - the first such demonstration of social issues since those against the Poll Tax 21 years ago - will give strength and courage to workers and local communities fighting against redundacies and closures around the country. And that it forces politicians to take position: Ed Miliband, who owes the election to Labour leader to the trade unions, had to come out clearly today, after months of inconclusiveness, against the cuts. Let's see what happens - and for the moment, the pictures.