I often pop up in Dublin for work but unfortunately I rarely have the time to enjoy the weather, beach and views, as I had in October 2004 (see right - yesterday the weather was actually very out of character). On those short visits I consider myself lucky if I find the time for a furtive pint somewhere. I generally meet non-Irish people for work, so that some times the only Irishmen/women I enter in contact are the taxi drivers (taxis are often necessary there because Irish public transport's, and public infrastructure's, development has lagged far behind the rest of the economy during the unruly growth of the 'Celtic Tiger' years). Which is a bit of a shame given that Dublin has just won the title of freindliest city in the world (the sort of title that tend to have immediate negative effects on those who win it, I'm afraid). 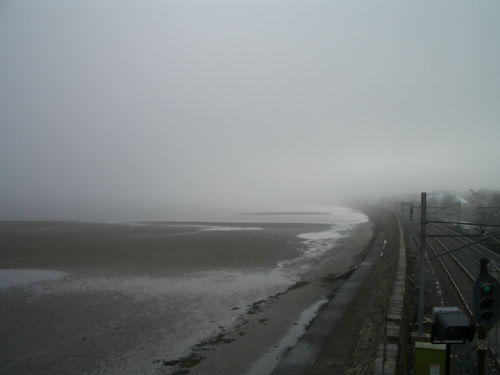 But these days the mood in Dublin isn't that good. This Thursday, actually, Ireland was very pissed off, from the taoiseach down, because the country had just been downgraded by the rating agency Standard & Poor's. The estimate of the actual cost of saving the Irish banks, and notably the Anglo Irish Bank, is constantly revised upwards. The overall cost of the government intervention to save the economy was something like 260% the Irish GDP, as compared to around 80% for UK or USA (IMF data). Also, the Irish state (a bit like the Greek?) is not used to collect taxes anywhere else than from houses, so with the housing market's collapse it's not self-evident where they will find the cash - can they keep cutting public expenditure?

Yet, if problems are real, the anger this time is more against the rating agency than against the government or the crisis as a whole. The Irish have endured the recession and public cuts in a very quiescent way that contrasts with the reaction in Greece. But in this case all, from the taoeisech to the media to the taxi drivers, blame the rating agencies. In fact, it is suprising that the rating agencies are still around, as powerful as ever, after having completely missed the financial crisis (they were giving the top AAA marks to Lehman Brothers until the week before it collapsed). Rating agencies and more in general auditors are the visible hand of the market: those who decide the price of things. They are so few that they enjoy oligopolistic power. They have huge vested interests too, just like Arthur Andersen with Enron. When rating private companies and their products (such as the derivatives that led to the crisis), they want to make their customers happy (the issuer-pays model). When rating public bodies, they want to spill as many friendly reforms as possible, or at least get better returns for investors. The political timing of so many rating agencies' interventions is extremely suspicious. What does James the Dublin taxi driver suggest? all against the wall. Yet, if we agree that the problem of financial market is the nebulous information, the job rating agencies are supposed to do is actually important, and we would need more of it, not less. There are EU proposals to create a EU rating agency (but how independent will it be?) or at least to regulate the existing agencies, but the suggestion to end with the 'issuer-pays' model has not made any progress. At least, it is refreshing that people, politicians and media are no longer taking the rating agencies as oracles. The Irish National Treasury Management Agency has taken the unprecedented step to criticise Standard and Poor's methodology - this may look like shooting the messanger but it is actually a useful contribution. The Irish media, which are not leftwing at all, including the Irish Times, are full of critical opinions.

Now let's get back to my informants, the extremely friendly Dublin taxi drivers. There's one thing they keep complaining about: the liberalisation of taxis in 2000. Apparently unrelated to Standard and Poor's, that measure was a symbol of the Irish neo-Thatcherite market enthusiasm of the period. It was a sadden populist reform that excited neoliberal economists, and tripled the number of taxis (apparently there are now more taxis in Dublin than New York), without, of course, solving the original problem, that is guaranteeing taxi supply at unfriendly times (3am Saturday) or at very high peaks (solving that problem would have needed more co-ordination and regulation, not less). But it made life for taxi drivers extremely hard - as the rest of liberalisation would have made it for most of the population a few years later.

I'll declare an interest now: my dad worked as a taxi driver. Yet, as a frequent taxi customer I'd say I know both sides of the debate. I like chatting to taxi drivers in any country, from Lima to New York to Moscow to (by gesticulating) Beijing. And my unscientific, unsystematic comparisons say that while taxis are regulated in very different ways country by country, city by city, some ways better than others, nowhere does the ideal free market actually works. Some politicians (in Italy, sadly, it's the centre-left ones, like Bersani and Amato) have made taxi deregulation the flagship of their pro-market policies. But the nature itself of the business - which requires some degree of trust on one side, and which involves nearly no physical barriers to entry on the other - begs for regulation, not liberalisation. Taxi operations are, in fact, always regulated somehow. If not by the state, if not by associations, then maybe by private corporations; and if not even by them - as in Eastern Europe in the early 1990s - then at least by the mafia. But taxi supply cannot be left to increase so long as anybody with a car and same spare time wants to put a Taxi sign on the roof of their wreck. It would be just like, in the name of the free market, allowing more people inside a cinema as long as anybody is willing to pay for the entry ticket: putting a limit is actually in the interest of a reasonable use of the cinema. Taxi deregulators are, in fact, just promoting different forms of regulations, usually of an inferior kind. In Chicago, where taxi drivers earn less than one dollar an hour, you can find taxi drivers who don't know English, let alone the city's geography - but they have been recruited by corporations according to their own interests and policies. As Madonna (indeed, not my favourite scholar in comparative piolitical economy) once put it when explaining her choice to move to London: in London she can put her child in a taxi and tell the driver to take it to nursery, without any worry; in the US, it would be tountamount to say farewell to her offspring. For more on New York taxis, by the way, I strongly recommend, apart the famous movies, the sharp "Taxi! Cabs and Capitalism in New York City" by union organiser Biju Mathew.